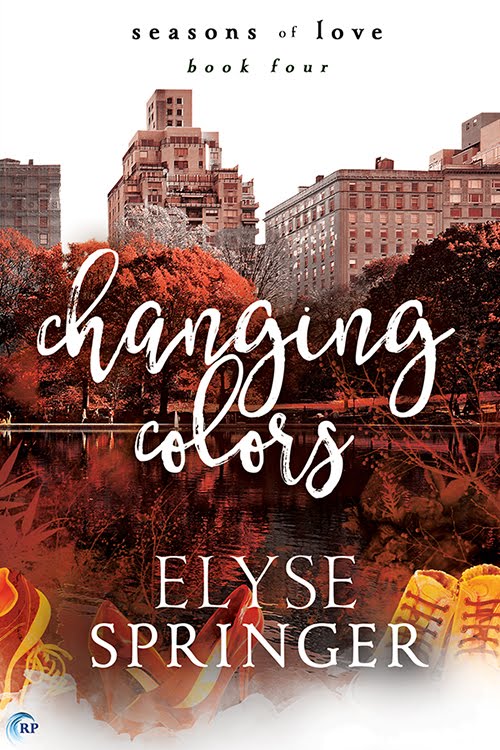 Hi! Welcome to the blog tour stop for Changing Colors, the fourth and final book in the Season of Love universe. I can't wait to introduce you to Tony and Gee-- who is, by the way, one of my favorite characters ever! This book is a stand-alone, but readers of previous SoL books will definitely see some familiar faces. Follow the blog tour to learn more about the book, the series, and the romance... and don't forget to check the tour each day, for your chance to win an Amazon gift card!

Tony Quinn has a knack for figuring people out. He likes labels, likes to be able to put everyone and everything in tidy boxes. As a theater director, it allows him to run a production without too much drama. But when he meets Gentry—“call me Gee”—in a bar one night, he discovers that some people aren’t so easily defined.

Gee Parnell is unlike anyone Tony has ever met before. He refuses to conform—to Tony’s expectations, or to society’s gender roles. He’s sexy and flirtatious, unapologetic and unashamed. And Tony isn’t sure he’s okay with that. So he breaks things off and escapes back into his well-ordered life.

But then an attack leaves Gee bloody and bruised, and Tony realizes that he isn’t ready to lose him. Not only is the passion between them off the charts, but Gee shows him a different way of understanding people. However, an exciting new job opportunity means that Tony has to decide between hiding his sexuality and his relationship with Gee, and his newfound appreciation for the color and beauty Gee brings to his life.

Changing Colors takes place over the three months of autumn—September 21 to December 21. But if you read the book, you’ll notice that there’s a major event missing from the narrative! That’s right… there’s no Halloween. I wrote the scene originally, but it ended up not working with the plot, and was eventually replaced by a date Gee and Tony go on (you know which one I’m talking about).

But if you’re like me, you’re desperately curious to see what Tony and Gee (and the rest of the SoL crew) dress up as for Halloween! So here’s part of the scene:

If Tony was too old for night clubs, he was definitely too old for a night club on Halloween. And yet there he was, standing outside a packed club on a Saturday night when most sane people in the city had long-since gone to bed. He’d worked that night’s show, then changed in the theater bathroom and escaped to catch a cab before any of the cast could spot him.

His phone buzzed while he waited. Nathan. Where’d you vanish to?

He got half a dozen emojis and exclamation marks in response. Then, ARE YOU IN A COSTUME TONY?

He was, in fact, in a costume. Because Gee had promised to wear one too, and there wasn’t much in the world that Tony wouldn’t do for Gee when he batted those long blond eyelashes.

There was a long pause, then another buzz. Sara this time. Nate says you’re wearing a costume. We’re now taking bets on what you’re dressed as. I have $10 on “broadway director”.

Ha ha. Tony rolled his eyes. He was a bit more creative than that, thank you very much, and told Sara as much.

“Isn’t a vampire a little cliché?” Gee’s voice came from a few feet away, sounding amused.

Tony finished tapping out a reply to Sara as he responded. “I’m not a vampire, you uncultured swine. I’m the Phantom of the O—” He looked up, and his jaw dropped.

He might have been dreading the night club over the last couple of weeks, but the daydreams about what Gee would be wearing had made their Halloween plans infinitely more tolerable. Tony had imagined sexy nurse outfits, or maybe something that showed as much skin as the night they’d first met. He’d pictured Gee dressed as a warrior from that epic fantasy TV show he was addicted to, or the warrior chick with the crazy eyeliner from the other TV show he was hooked on.

He had not, at any point, pictured this.

Instead of laughing, Gee scowled and said, incredulous, “What the fuck?”

“What?” Tony’s eyes widened. He glanced over Gee’s costume again: short gray skirt, white blouse, a skinny blue and gold-striped tie, and a pair of black kitten heels. His long blond hair was down and hung wild around his face, and a pair of wacky pink sunglasses perched on his head. He had a stick in one hand.

“I’m not a sexy school girl!” He paused, eyebrows furrowing. “Okay, wait. I am sexy. And I am a school girl. But that’s not—I’m not—” He visibly collected himself. “And you called me ‘uncultured swine’. I’m Luna Lovegood!”

Tony frantically searched his mind, but he was pretty sure that wasn’t a character from either Game of Thrones or the show with the badass queer ladies. “Uh, who?”

Gee’s face went through a full circle of emotions: shock to disbelief, to disappointment and back to shock again. “Anthony,” he said slowly. “Are you telling me that you don’t know who Luna Lovegood is?”

Feeling like he was about to step on a landmine, Tony nodded.

Gee took one step forward, then another, closing the distance between them. He reached up, pulling the half mask off Tony’s face so he could stare him straight in the eyes. “You’ve never seen Harry Potter.”

“No?” Sara and Nathan talked about it all the time, and occasionally yelled a word that sounded like “Ah-chee-oh” at each other when they wanted the other one to bring them something. But Tony had, for his own sanity, learned to just smile and nod or risk being threatened with a fifteen hour movie marathon.

Suddenly Tony could see the opening. “We could go watch them? Right now?” He’d sit through a Harry Potter movie or two, if it meant not having to spend hours in a crowded night club.

But Gee shook his head. “Hell no. I didn’t get dressed up like this not to show it off.” His eyes narrowed. “How about we go dancing, have a few drinks, and then you can take me back to your place and I’ll show you a few magic tricks, hm?”

And yeah, alright. Maybe tonight was gonna turn out to be pretty damn magical after all.

About the Seasons of Love Universe 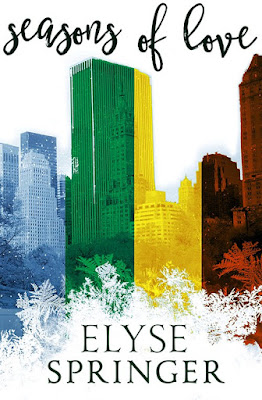 New York is the city that never sleeps: where everything can change in the blink of an eye, and where anything is possible—especially romance. In the bitter cold of winter or the impossible humidity of mid-summer, your own happily ever after might be right around the corner.

The people of New York come from all walks of life, and the relationships are just as diverse. So whether you’re a waiter or an aspiring actor, a banker or a model, falling in love can happen quicker than the seasons change.

Check out Seasons of Love! http://www.riptidepublishing.com/titles/universe/seasons-love

Elyse is an author and world-traveler, whose unique life experiences have helped to shape the stories that she wants to tell. She writes romances with LGBTQ+ characters and relationships, and believes that every person deserves a Happily Ever After. When she’s not staring futilely at her computer screen, El spends her time adding stamps to her passport, catching up on her terrifying TBR list, and learning to be a better adult.

She’s always happy to chat with other readers, and you can find her online at:

To celebrate the release of Changing Colors, one lucky winner will receive a $15 Amazon gift card! Leave a comment with your contact info to enter the contest. Entries close at midnight, Eastern time, on October 28, 2017. Contest is NOT restricted to U.S. entries. Thanks for following the tour, and don’t forget to leave your contact info!