The Wyverns by L.M Somerton - Series Review Tour with Giveaway

What can you expect from The Wyverns series?

Well, plenty of action and an equivalent amount of kink! The Wyverns isn’t a typical motorcycle club and its members aren’t typical bikers. They do have plenty of attitude and a knack for getting into trouble. Their leader, Rogue Hellaby, is as fierce as the dragon adorning his back and has little patience for the brat he is ordered to kidnap. Orlando de la Pena proves to be almost as much of a challenge as the gunrunners and drug cartels that The Wyverns regularly butt heads with and that’s how the series begins – with kidnap and kink! The book titles are all linked by the word ‘trap’ because the members of The Wyverns are all trapped by the past, which ties them to a life they reluctantly enjoy. Linking them all together is a mysterious character called Mr. Trap, who manipulates their vulnerabilities shamelessly. This mystery threads through the series and is resolved in the new book, Steel Trap.

Secrets don’t stay hidden forever. Hatchet has a thing for the enigmatic Mr. Smith, Horatio Trap’s spokesman. He’d love to get his hands on the pretty man and show him how good it feels to take orders for once rather than hand them out. He’s had his eye on Smith for years and he’s running out of patience. The Wyverns’ involvement in the drug trade is limited to stealing money from the cartels—they don’t want junk peddled on their turf. When Trap orders them to destroy a crack cocaine factory in Phoenix, they are happy to oblige. But Smith throws a spanner in the works by posing as a potential buyer, putting himself in mortal danger. Hatchet and The Wyverns come up with a plan to fake Smith’s death, muscle in on the deal and convince the cartel to do business with them instead. But when Hatchet’s cover is blown he’s left to save a bunch of illegals, destroy the drugs and wipe the factory from the face of the planet. It’s all in a night’s work for The Wyverns—but there are still secrets to uncover and the mysterious Horatio Trap and his mind games can’t stay hidden forever.

Excerpt
“We need a new fucking couch,” Hatchet grumbled. “My spine is turning into a pretzel.” He threw off the thin blanket covering him then swung his legs around so he could sit up. The scent of fresh coffee tickled his nostrils.
“So sleep in a bed like the rest of us,” Orlando said, far too bright-eyed and bushy-tailed for first thing in the morning. He stood next to the couch wafting a mug back and forth. His lime green top hurt Hatchet’s eyes.
“Gimme that coffee, brat.” Hatchet made a swipe for the mug but Orlando stepped away out of reach.
“Nope. This is for Smith. He deserves it more than you do.”
“He’s the reason I need a chiropractor on call.” Hatchet rubbed the sleep from his eyes. “Fuck, I need a shower.” He’d slept in an old T-shirt and sweats.
Orlando’s delicate button nose wrinkled. “I could hose you down outside if you like?”
Hatchet levered himself erect. At his full height, he towered over Orlando. “The only scenario I’d enjoy involving you, me and a hose would have the nozzle invading a certain part of your anatomy.”
Orlando’s eyes widened. His lower lip quivered. He thrust the mug of coffee in Hatchet’s direction.
“You think I’m falling for that hurt puppy routine?” Hatchet grabbed the mug before Orlando could change his mind. He took a long swallow. “This was for me all along, wasn’t it?”
Orlando grinned. “I gave Smith his ages ago. You were still snoring. Like a water buffalo.” He scampered toward the kitchen before Hatchet could react. He’d need at least one more mug before he felt up to chasing after Rogue’s obnoxious sub. The coffee was good though.
“The brat giving you trouble?” Rogue, leader of The Wyverns motorcycle club, strolled over.
“Always.” Hatchet raised his mug in a mock-toast. “Makes good coffee, though, so providing you keep warming his ass on a regular basis, I can handle him.”
Rogue ran a hand through his dirty blond hair. “Well, you could be in for a few rough days. I’m thinking about heading out to California. A road trip, then a few days on the beach. I want to see if I can still stand on a surfboard without wiping out.”
Hatchet’s eyes narrowed. “Wait. You’re leaving him here?”
Rogue shrugged. “I told him we were both going, but he said he had to stay here and take care of Smith since you were doing… What were his words? Oh, yeah. A piss poor job of it.”
“He said what?” Rogue had better find himself a new plaything. By the time Hatchet finished burying the brat, they’d never find hide nor hair.
“I’m kidding. Yeah, we’re leaving later today. You okay to handle things here while I’m gone?”
“You know it. As long as you’re taking the brat with you. And, yeah, I almost had a heart attack when you suggested you weren’t.”
Rogue chuckled. “I’m going to let him know now. Smith’s leaving today, right?”
“So he says.” Hatchet shrugged. “Shelton thinks he should rest up a few more days but that man is stubborn as a mule.”
“At least you get your bed back.”
“There is that.” Hatchet stretched, easing the kinks from his muscles. He’d rather Smith remained in his bed, preferably naked, possibly tied down, but he wasn’t going to admit that to Rogue. From his grin, Rogue knew what he was thinking, anyway. 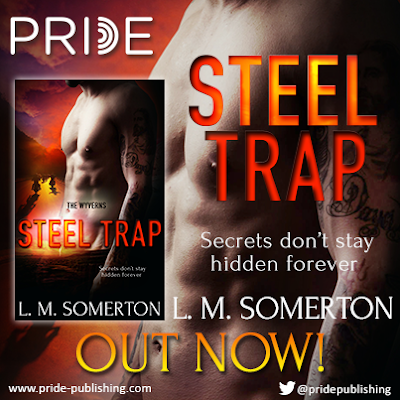 CHECK OUT THE OTHER FOUR STORIES IN THE SERIES

Not all cages have bars.

The Wyverns Motorcycle Club has a reputation as fierce as its dragon emblem. Its enigmatic leader, Rogue Hellaby, has a police file so thick you could prop up a table with it. The qualifications for membership are a reckless disregard for authority and the attitude of a spitting cobra. But The Wyverns MC is not quite what it seems. All the riders have dubious histories in the military or the police—now they just serve and protect their own interests and those of Horatio Trap, the manipulative bastard who recruited them.

A man without scars never had to fight for something he believed in.

A new relationship takes time and effort. A new relationship with Orlando de la Pena takes a whole lot more. As a Dom, Rogue knows what he wants, but Orlando refuses to fit neatly into the box labeled ‘submissive’. He’s feisty, demanding and far too pretty for his own good.

Orlando loves Rogue and he’s learning to love The Wyverns, but he hates being stuck out in the desert. Finding a niche in the world of bikes and fierce warriors is difficult, and Orlando’s impatience gets the better of him. He walks out into the desert and runs in to an antisocial diamondback.

Rogue has more than one problem to deal with. The Longhorns MC issues a challenge for territory. The Bellazi cartel is out for Wyvern blood. The Wyverns are under siege, and Rogue has to work out how to save not just Orlando, but all of them.

Sometimes the only way to spring a trap is to use live bait.

Teddy Austin has had more than his share of run-ins with local law enforcement. The Wyverns have a reputation to maintain, and Teddy feels it’s his duty to cause havoc whenever possible. Of course, getting arrested means time in the company of Sheriff Adrian Hayder—always a bonus—though Teddy would far prefer to have the sheriff wearing the cuffs.

When The Knights of War MC arrives in Phoenix, Trap orders The Wyverns to get inside information. In order to infiltrate the gang, Teddy must appear to betray his friends and switch his allegiance. Working undercover, however, he confirms what they have all suspected—The Knights of War are a cover for something much more sinister than a hell-raising bunch of bikers, and they fully intend to turn Phoenix into a battleground. With Sheriff Hayder getting far too close to the truth, Teddy is left with a few problems—how to stop a war, keep his balls intact and ensure the man he loves keeps breathing

Exposing secrets can be lethal.

Crow has had his eye on baby-faced Shelton since the young man became part of the Wyverns, but Crow is a committed Dom and unsure that Shelton is ready, or willing, to become his submissive. Getting trapped together during a dust storm provides an opportunity to find out.

When the dust settles, the winds have scoured the desert and uncovered a shallow grave full of bodies. Smuggling people across the border is big business and Crow knows that the traffickers will not want their gruesome secret revealed to the authorities.

When Shelton is taken and used as collateral, Crow and the Wyverns have to decide just how far they are prepared to go to serve justice and save Shelton’s life.