Gage has problems saying I love you. After five years with his live-in boyfriend, Lucas, he still hasn’t said it. When Lucas calls it quits, it’s not a surprise, but it couldn’t have come at a more inconvenient time—the eve of Gage’s first business trip to Sarajevo.

Nikola, who’s been tasked with chaperoning Gage during his stay, is the walking epitome of sex on a stick. Gage quickly develops an attraction to him, even before he’s certain it could ever be reciprocated. When the feeling turns out to be mutual, Gage is surprised by Nikola’s domineering bedroom persona but finds he likes being manhandled by the sexy Bosnian.

After a heated disagreement, Nikola must convince Gage that even though they’ve only known each other a short time, what they feel for each other is worth fighting for. With only his cell phone and a plan, Nikola goes about getting the man who has stolen his heart to give them a chance at happiness.

“I swear to god, if you get on that plane tomorrow, I’m going to pack my shit and go home,” Lucas shouted.

Gage sat on the couch looking up at the slight blond man who was in the middle of having yet another tantrum brought on by Gage having to leave on a business trip. “I thought this was your home,” Gage replied blithely.

It wasn’t the first time Lucas threatened to leave, and it probably wouldn’t be the last since they’d had this same argument each time Gage left on a business trip. Still, he knew he’d get on the plane, and when he got back in a month, Lucas would be there—apologetic and looking to make up. That’s the way it had gone for the last two years—ever since Gage took over the emerging markets accounts at his dad’s company.

“You know that I only came here to be with you. There’s no other reason anyone would come to this Podunk town.” Lucas gave Gage his best scowl. “But you’re never here. This isn’t what I signed up for.”

“I told you I’d be gone quite a bit. I never lied to you. You were the one who decided to move here. I was fine with driving down to see you on the weekends.”

Okay, so he knew Lucas wasn’t exactly happy in a smaller city, but it was Lucas’s decision—after a year and a half of only seeing each other on weekends—to move. Lucas had been happy in Minneapolis, when they both had their own places and could see each other whenever they’d wanted but had grown weary of the weekend-only visits that were primarily spent in bed. Gage had been just as happy with seeing Lucas only on the weekends when he’d moved back north to his hometown, and with all of Lucas’s drama of late, he’d been thinking he’d be happy to go back to that arrangement. He’d thought his feelings for Lucas would deepen over time but, though he cared for Lucas, he’d never fallen in love with him—or at least he didn’t think this was what love felt like.

“Sure you were fine with that, but I want more. I’m not just some booty call here for your pleasure when you need to get off,” Lucas spat out. And there it was. It was like there was a script for their lives, and this scene was repeated often.

Lucas wanted more, and at the age of thirty-seven Gage probably should too, but he’d come to realize more wasn’t always better, and even though he tried, it was impossible to convince Lucas what they had was good enough. He’d only let Lucas move in with him because he’d been lonely, although now he was thinking he should have gotten a dog.

Pushing himself up off the couch, he went to Lucas. This was the part where he always took Lucas in his arms and let him cry it out until he decided to stay. Then Gage would take him to the bedroom, fuck him through the mattress, and Lucas would fall into a contented sleep in Gage’s arms. In the morning, Lucas would wake up just enough to tell Gage to have a safe trip and that he loved him when Gage kissed him before he left for the airport. Of course, Gage would reply with a “Me too” because he’d never said the actual words to anyone before, and he wasn’t about to start with Lucas—Gage had never lied to Lucas.

“Don’t even, Gage,” Lucas said holding up his hand to ward Gage off. “I’m not going to let you sweet-talk me into bed this time.” Oops, Lucas had gone off script. He looked up at Gage with his big blue eyes on the brink of tears. “I’m really going this time. You know I love you more than anything, but I can’t do this. I’m sick of being alone so much, and there’s nothing here for me. All of my friends and family are back home. You’re all I have here, and you’re never here.” His voice cracked with emotion, and he ended his speech with a sniffle Gage knew always preceded the tears that were inevitably going to come.

“Babe, come on; we do this every time. You know how this is going to play out. Can’t we just skip this?” Gage grabbed his hand, giving it a tug, and Lucas let himself be pulled to Gage’s chest, even wrapping his arms around Gage’s waist like he wanted to be there. Lucas’s chest hitched, and Gage knew he was crying before the wetness seeped through his shirt. Gage stood there holding him for a couple of minutes, hoping Lucas would come to his senses like he normally did.

“I have to leave, Gage. Maybe you were right. Maybe we’re just in different places in our lives—our timing is off. I just can’t do this anymore. I’m going to be gone when you come home. I hope you understand. I don’t want you to hate me because I still love you. Maybe someday you’ll be ready, but I can’t take the chance that you may never be,” Lucas said into Gage’s chest after he’d calmed enough to talk.

Gage couldn’t help thinking how sad it was that Lucas was the one saying it to him instead of the other way around. He should be the one ready to settle down and start a family, not Lucas, who was only twenty-six—just a cute little twink. Someone like Lucas should be out clubbing and fucking everything that moved and not tied down to a guy like Gage.

It wasn’t that Gage didn’t want to be with just one guy for the rest of his life and maybe adopt a couple of dogs or kids or whatever. It was hard for him to explain it to Lucas because he didn’t really understand it himself. He could tell Lucas that his shrink diagnosed him with “commitment issues” that stemmed from his not “fully accepting his homosexuality,” but Gage was sure Lucas wouldn’t buy it for a minute—hell, Gage didn’t buy it for more than the time it took him to walk from the guy’s office to his truck.

“You have to do what’s best for you, Luke. I just wish you wouldn’t have waited until the night before I leave to tell me.” Gage was more than a little annoyed at the timing.

“If I would have told you sooner, you’d have had time to talk me out of leaving. I thought about just letting you leave, thinking I was happy, and moving while you were gone, but I couldn’t do this over the phone. I’ve loved you too long to end it that way,” Lucas said softly. He tilted his head up to look at Gage, who leaned down for a kiss, which Lucas accepted, letting Gage kiss him tenderly but pulling away before it could become anything more. “I can’t do one last goodbye fuck with you, Gage, I know how it will end. I’m going to go stay at Jen’s tonight. I’ll move my stuff out before you get back.”

“You don’t have to go. You can stay here. We’ll just sleep. Just let me hold you while we sleep one more time.” It was finally sinking in—Lucas was serious this time and was going to leave. That fact hit Gage harder than he figured it would. He wasn’t sure he wanted Lucas to stay, but he was almost certain he didn’t want him to go either. Yeah, I can’t even figure things out in my own head, some great catch I am.

“No, you know that is not what will happen. I need to go now while I still have some control over my emotions.” Lucas put on his coat, grabbed his car keys off the hook by the front door, and then turned his tear-stained face to look at Gage. “I’m so sorry, Gage. Have a safe trip. I love you.” Opening the door, Lucas walked out on Gage without giving him the chance to say “Me too.” 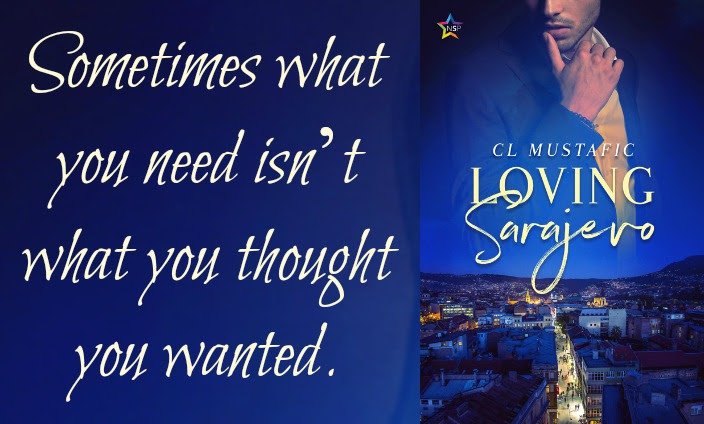 Is it true that anyone can be a writer?
I think it’s true that anyone can write but writing a story other people would want to read is another thing. I would never discourage anyone from trying to write anything they want. It’s hard work to write a full length novel and come out at the end with something that makes sense and is entertaining. I do think it takes some skill to do both those things but I also think it’s a skill that can be learned so maybe if you’re a struggling writer, just keep plugging away at it and maybe eventually it will work out.

How did it feel when your first book got published?
I was terrified and excited but mostly terrified. It felt a little surreal and I think, even after four months, I’m still processing.

What is your motivation for writing more?
I have too many stories left to tell. Seriously, I have ideas for days and I’m sure I’ll never get to most of them so that’s my motivation. I know I have limited time, as we all do, and I want to tell as many stories as I can while I still can.

Have you ever considered writing an autobiography?
Yes and no. Yes because I’ve got some interesting stories to tell but no because I’m quite sure the most colorful people in my life would take umbrage at their antics put down on paper.

Do you think you still have a story to tell to the readers?
Well I sure hope so! I’m currently working on a few things I think might interest some readers.

CL Mustafic is a born and bred American mid-westerner who mysteriously ended up living in one of those countries nobody can ever find on the map of Europe. Left with too much time on her hands—let’s be honest here: it was the lack of television channels in her native language–and too many voices in her head trying to fill the silence, she decided to give her life-long dream of writing a novel a shot. So now, between shuttling kids back and forth from various activities and risking her life on the insanely narrow, busy streets of her new hometown, she loses herself in her own made-up world where love always wins.