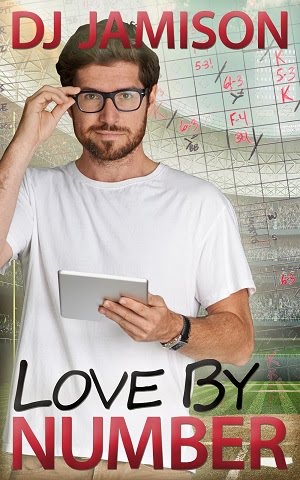 
Aidan doesn’t have the best record with relationships, but he’s had a lifelong love affair with baseball. Player stats and computer simulations make sense. People don’t. But when he needs a ride to the World Series, he must rely on another person: a sexy artist who is as spontaneous as Aidan is predictable.

Jesse doesn’t care about baseball. As an artist, he'd rather paint a player than watch him at bat. But his grandpa loves the Kansas City Royals, so he takes him to every home game. He has no idea a fender bender in the parking lot is about to deliver new inspiration in the shape of a man with a whole bag of quirks.

Despite their differences, Jesse and Aidan hit it off, and their sexual chemistry is fantastic. But when Aidan's numbers betray him, Jesse isn't prepared for the fall-out. If Aidan continues to put his passion for baseball stats above everything else, he could miss out on the most important numbers in life: the number of smiles, kisses and laughs they could share in a lifelong journey together.


Aidan clutched at his hair, heart hammering in his chest. The front driver’s side of his black Saab was crumpled. The wheel well took a direct hit, the force of the collision pressing it into the tire. He could tell from just looking that the axle must be bent, if not broken, by the way the tire tilted at the wrong angle.

It’s not drivable, he thought, and his heart hammered harder. He felt his hands trembling, and not as an aftershock of the accident. Well, not from experiencing the accident, at least. He was shaking because his plans had just been thrown in the blender.

He looked up, gazing blankly at the figure approaching him. A man, but his features were lost in the shadows. Not that Aidan could focus on something like facial features right now. That wasn’t easy on a good day, much less in a moment like this.

“It’s not that big a deal,” he muttered to himself, as he’d learned from his therapist years ago. “It’s not. It’s not. But ...” He groaned and clutched at his hair some more. “How am I going to get to the World Series now? I have to get there!”

He’d wrapped up so many hopes in getting to that series, in watching the Royals perform in high-stakes games. It was the perfect time to prove out his math. It might not be rocket science, but Aidan still wanted to watch his math come to life on the baseball field, in the most important series of the season. In person.

A hand touched his shoulder, and he flinched away.

“I’m sorry. Are you hurt?” a voice asked. A nice, mellow voice. He liked the raspy quality of it and the cadence of the man’s words. His tone calmed Aidan.

He faltered when he recognized the dark hair tinted with maroon highlights, dark eyes and sculpted lips — all coming together in a perfect symmetry. A perfect representation of geometry in nature, really. And the freckles splashed over his nose, highlighted now by the security lights overhead? They somehow added to his sex appeal instead of detracting from it.

Aidan had seen an open sketchbook on this man’s lap more than once when passing by on a bathroom break. He mostly drew portraits, from the look of it, but Aidan had only caught a glimpse. It made sense he was an artist since his entire appearance was like a work of art to Aidan’s eyes. He couldn’t imagine being so creative with his hair or his wardrobe or his skin, where Sexy Artist Guy had embraced both tattooing (his right bicep) and piercing (both ears and right eyebrow).

“I’m so sorry,” Sexy Artist Guy said again. “I saw an opening and went for it. I didn’t see you coming, but my grandfather was distracting me—”

“Blame it on the old man, why don’t ya?” a hoarse voice boomed loudly enough to make Aidan jump.

“Gramps, not now, huh? The guy is freaking out.”

“I’m not freaking out,” Aidan said sharply. The fascination with the stranger’s face faded as he remembered why he was in this situation. He gestured to the damage. “There’s no way I can drive that.”

“We can give you a lift,” the old man said, at the same time the handsome stranger said, “We’ll call you a tow truck.”

“But look at my car!” he said, not sure they understood the direness of the situation.

Artist Guy frowned, then glanced behind Aidan. Following his look, he realized they were blocking traffic. A line of cars snaked through the parking lot, headlights shining on Aidan’s personal disaster.

“I should move my car.” He glanced back at the bent wheel well, frowning. He hoped he could move the car.

They all took their positions, and with some work managed to push the car into an empty space next to the Lincoln Towncar that had so cruelly crunched the Saab. Aidan cringed at the scraping metal sound as his car rolled out of the lane of traffic.

Once off to the side, Jesse pulled out his wallet. He handed his license to Aidan, who stared at it. He took in all the details: 6-foot-1, 175 pounds, brown hair, brown eyes, born one year after Aidan, making him twenty-six.

Jesse cleared his throat, and Aidan glanced up.

“Aren’t you going to take a picture?”

He started to hand the license back, but Jesse looked at him as if he had a screw loose. Then it clicked. Take a picture. For insurance. Right.

He dug out his phone and clicked the pic of the license, and then of the insurance card that Jesse handed over. He was still rattled by the accident, thrumming with bottled-up anxiety.

“You okay? You’re pretty twitchy,” Jesse said. “I’m sure the insurance will cover the damage.”

Aidan waved to his car, unsure how to make Jesse understand.

“Um, won’t it still be reliable when it’s fixed?”

“The World Series is in two days.”

“Jesse, stop being thick,” the old man interrupted. “Obviously, he was going to drive up to St. Louis, and a Saab is a foreign car. He won’t be able to get the parts locally. Maybe not even the mechanic. They don’t make those cars anymore. He can’t get it fixed in time.”

“I have to go to that game. I go to all the away games within driving distance. I always do. And this is the World Series. I'm going to have to take a bus, and, oh God, I can’t stand to ride the bus—”

“Jesse will drive you.”

Aidan looked at the older man. He had a bushy head of white hair and enough wrinkles to give a Shar-Pei a run for its money, but his tone was confident, the kind of confident that brooked no nonsense. He’d heard that tone from his own mother too many times to count.

“That would be great!”

Normally, Aidan wouldn’t want to ride long distance with a stranger, but when contrasted with a bus full of strangers, he jumped at the opportunity. Besides, Jesse and his grandfather had been at every home game. If Jesse were some kind of predator or bully, he'd have shown it by now. Right?

He’d only had one other interaction with Jesse. He’d walked up to Aidan once, when he was trying to quickly record the stats from the latest play and compare them against what he’d predicted for that player’s performance. Aidan had been too distracted to make conversation, especially small talk with a stranger. But he couldn’t help noticing his great smile. Jesse was one of those people who smiled with his whole being, not just his mouth. His eyes brightened, his cheeks dimpled and his body even seemed to vibrate with happy energy.

Aidan liked that because it was easy to see Jesse’s happiness. It wasn’t subtle, which would be lost on him, or confusing — like when people’s mouths smiled but their eyes stayed cold. He didn’t understand that. Was he supposed to respond to their mouth or their eyes? And then there were some people who just smiled all the time, even when they said mean things. What did that mean? Smiles could be confusing, but Jesse’s wasn’t.

“I have tickets to the games,” Gramps was saying now. “I was going to ask you to go, as a favor to me.”

“Hush,” Gramps said, a gleam in his eye. “I’m not up for that kind of travel. I want you to go in my place, so you can tell me all about it. You take this nice young man. It’s the least we can do. Watch the games for me, and tell me all about it when you come home.”

Aidan pulled out his phone to call the tow truck, watching the two men in a staring stand-off. He made arrangements for the tow and disconnected in time to see Jesse sigh and nod.

“Good boy,” Gramps said, clapping him on the shoulder.

DJ Jamison grew up in the Midwest and worked in newsrooms for more than 10 years, which came in handy when she began writing stories centered on a series of love connections between small-town Kansas newspaper staffers, their sources and their readers. It was the perfect entrance into the world of fiction, and she has since branched out into ERs, health clinics and other settings to tell the stories of characters who are flawed but loveable. She writes a variety of queer characters, from gay to bisexual to asexual, with a focus on telling love stories that are more about common ground than lust at first sight. DJ is married with two sons and two glow-in-the-dark fish that are miraculously still alive.