Tender With A Twist by Annabeth Albert - Release Day Blitz with Review, Excerpt and Giveaway 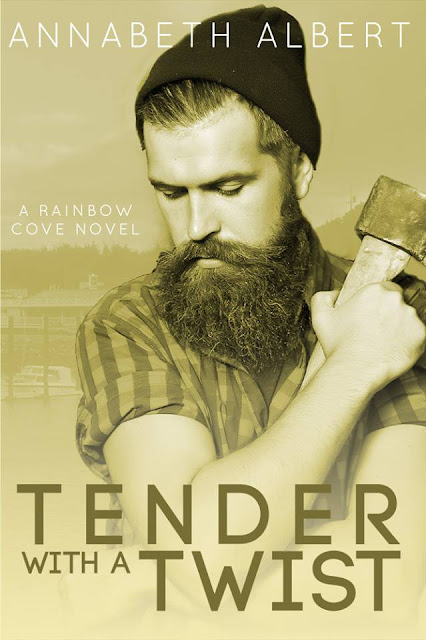 
One kinky wood carver. One younger chef looking to try new things. A series of lessons that bring both men more than they bargained for…

Curtis Hunt has made a name for himself as a chainsaw wood carver, winning national competitions and operating a small business in Rainbow Cove, Oregon. As winter whittles away his tourist traffic, his goal is just to survive the season and try to not get lost in grief for his dead lover. It’s been two years, but he’s sure he’ll never be over the love of a lifetime. However, his body has a certain restlessness that he doesn’t quite know how to calm.

Logan Rosner knows a thing or two about restlessness. It’s what drove him to Rainbow Cove to be a chef at a bar and grill run by his friends. And it’s what drives him to a single sizzling encounter with the local legendary lumberjack. Both men get far more than they expected and learn that first impressions aren’t always accurate…

But when Logan proposes a series of sexy lessons, Curtis must decide how much he’s willing to risk. He knows he can’t afford to get attached to Logan’s good cooking, his easy smiles, or his caretaking, but he keeps going back for more, even as deeper emotions become involved. Soon, Curtis must decide whether to risk his heart again or risk losing Logan for good.

The crazy woodcarver was shirtless. Again. It was a sleepy Thursday in January on the Oregon Coast which meant most sane people were in flannel and jackets and bundled for the sharp bite of the wind. I was wearing fleece-lined bike pants and a long-sleeved cycling jacket myself as I celebrated the first good ride of the year, and I was still chilly when I stopped my ride near the jewelry store on 101—the main highway running through Rainbow Cove. I told myself that I’d stopped for some water from my bottle, but I knew it was a weak excuse. Really, I’d been transfixed by the sight of Curtis Hunt carving up a giant tree trunk with his chainsaw.

For all that rumors flew about his eccentricity, the man was an unparalleled artist, and watching him do his thing was a true pleasure. Sweat dripped from his head and back despite the cool temperature, and he worked like a man possessed, moving this way and that around the piece, dancing almost as his chainsaw flitted about with the sort of grace I’d expect from the jeweler, not this buff lumberjack with heavy machinery.

He wore sawdust splattered jeans, heavy boots, safety goggles and ear protectors, but his red flannel shirt lay discarded on a nearby sculpture of a falcon, showing off his shimmering muscles and tats that even from a distance were impressive. For all that the guy had probably fifteen years on me, he was in amazing shape. Hell, if I had ink and muscles like that, I wouldn’t keep my shirt on, either. All the muscles made something warm unfurl in my gut, but I dismissed the low thrum of arousal as a never-happening-in-this-lifetime thing. Chances were very high that he’d laugh at any of my fantasies, especially the ones involving him, some rope, and his usual intense stare replaced with something closer to supplication.

But, a guy could still look. And want. So I took my time drinking my water, watching as the outline of a bird slowly emerged from the raw tree trunk.

In a town as tiny as Rainbow Cove, the rumor mill worked overtime, and I knew all the rumors about Curtis. Knew he’d lost his longtime lover a year or two ago and that the two of them had been mythic fixtures in the area. Curtis had apparently gotten more eccentric since the other guy had passed, moving into the old gas station he used as a gallery for his carvings, growing his own food, and going notoriously cranky about change.

And change was what had driven me to Rainbow Cove. Change was what my restaurant represented—hope that the area economy could find a new foothold in tourism. So it wasn’t surprising that Curtis didn’t seem to like my friends and me any. Probably wouldn’t appreciate me looking at him like he was a lumbersexual Tumblr all queued up for my viewing pleasure.  But damn, those muscles…

I gave myself last look before I pedaled away, heading away from the center of town, taking the turnoff that would lead me to the narrow residential road that skirted the beach to the south. I was alone on the road, glorious, vast gray skies and sprawling blue ocean my only companions. This was what I’d come to Rainbow Cove for, the space to be alone, the quietness that I’d only ever found before in a dojo. Portland was crowded, and not just with people. My parents’ expectations always loomed large, as did past mistakes and hurts, and the general hustle of the area made it hard to catch my breath, hard to think and breathe and simply be. The traffic. The noise. The demands. All of it had gotten to be too much for me, and when my friend Mason had proposed the idea of the bar and grille here on the coast, I’d leapt at the chance to start fresh, especially since I’d loved the coast from some of my earliest memories of family weekends away.

Eventually, my ride returned me to the tavern where Mason was signing off on a meat delivery from a local farm.

“Chef!” The driver greeted me with a wave as I locked up the bike. “We’ve got some new fillets in. Think you might want some for a special this week?”

My mind immediately flitted away the shirtless woodcarver and back to my real passion—cooking. I loved being the chef here, the guy who made the decisions and the specials. I’d had years of sous chef positions in Portland, growing ever more eager for my own menu, one where I could play with sauces and presentation and choose my own local ingredients.

“I’m picturing a peppercorn crusted fillet with red wine reduction.” I inspected packages Mason was loading into the freezer and fridge. We’d do most of our business with the endless stacks of burger patties, but I loved changing things up with my daily specials, too.

“Don’t know if anyone will pay fillet prices.” Mason shook his head. The slow winter season was starting to wear on my friend, who also served as our business manager. “You can try it as a special, but let’s not over-order.”

I reluctantly took a small order of fillets, ceding to Mason’s wishes, and rounded out my weekly specials plan with cheaper options like shepherd’s pie.

“How was your ride?” Mason asked after the delivery guy was on his way.

“Fine.” I didn’t feel the need to report on my perving of the woodcarver. It had been a little personal indulgence. Not to mention the fact that Mason’s police chief boyfriend, Nash Flint, was close friends with Curtis, which meant I’d be in for double the teasing if I let on that I’d let my eyes wander in that direction.

“You’re not too lonely, are you?” Mason pressed. “It’s your first winter on the coast, and I know that can be hard.”

“Not lonely,” I said, truthfully. I was so happy to be free of all the voices of Portland—my well-meaning parents, my ex, my aikido master, my many opinionated friends, the executive chefs and restaurant managers who hadn’t seen fit to promote me. The silence of the off season meant that for the first time in my life I was finally free to figure out my own direction, and I intended to seize that. I wasn’t telling Mason, but that was my New Year’s resolution—be the person I’d been reluctant to embrace in Portland. It was high time I took a chance on myself.

4.5 out of 5 stars
Tender With a Twist is the second book in the Rainbow Cove series. It can be read as a standalone story but for a deeper reading experience I recommend reading the books in this series in order.

We previously met both Curtis, the grumpy woodcarver, and Logan, the sexy chef in the previous book, Trust With A Chaser. Curtis continues to be his super grumpy self in this book, and for this reader that aspect of his character is kind of endearing. He's lived a tough life with his parents and then losing his partner, Troy, that would maybe have damaged others that aren't as strong-willed. The grumpiness puts a wall between him and others that he believes protects him from expecting things or wanting too much for himself.  Logan moved to Rainbow Cove, with his friends, to be the lean, artistic master chef at their bar and grill. He grew up very different from Curtis, but he faced serious bullying all through his child and teen years, which has shaped him into the person he is now. This sexy chef with a black belt in a aikido happens to hide his desire to be Dom to this big, sexy lumberjack carver.

I have to say I LOVED Tender With A Twist even more than I did Trust With A Chaser. Logan and Curtis were two characters that intrigued me from the first book. Their book, is filled with sexy, HOT and kinky moments that lead to breaking down all those self imposed walls both Logan and Curtis have created. I truly cheered these two men on from the first grumpy interaction at the bar and grill all the way through to their HEA.

So yes, this book has one of my favorite types of kink along with all the developing intimacy that comes with it. As Logan and Curtis become closer, yes it scares the hell out of Curtis because of his past. So yes there are some bumps in their road but in the end it all works out. This book was one of those couldn't put it down even though I needed sleep/had to work/drive, etc. The story is fulfilling, the book itself is true to this author's style with great characters, a good backstory, and a relationship that makes both characters better together.

Tender With A Twist is easily one of my top 15 books of 2017 with these two characters. I highly recommend this book just make sure you have time to devour it in one sitting. I can't wait for the next book in the series to see what the author does next.

Annabeth Albert grew up sneaking romance novels under the bed covers. Now, she devours all subgenres of romance out in the open—no flashlights required! When she’s not adding to her keeper shelf, she’s a multi-published Pacific Northwest romance writer.

Emotionally complex, sexy, and funny stories are her favorites both to read and to write. Annabeth loves finding happy endings for a variety of pairings and is a passionate gay rights supporter. In between searching out dark heroes to redeem, she works a rewarding day job and wrangles two children.