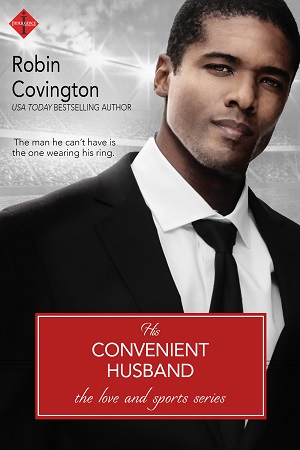 NFL football player Isaiah Blackwell lost his husband three years ago and is raising their teen son alone. He lives his life as quietly as his job allows, playing ball to support his family but trying not to draw unwanted attention. His quiet life is shaken up when a mutual friend introduces him to Victor, a visiting principal ballet dancer who is everything Isaiah is not.

Brash and loud, Victor Aleksandrov has applied for political asylum to avoid returning to Russia, where gay men are targeted and persecuted. He’s been outspoken about gay rights in his home country, and if he doesn’t get asylum, going back to Russia is a death sentence.

Their one-night stand turns into a tentative friendship, a relationship they both agree is temporary…until Victor’s denied asylum. Isaiah can’t offer Victor a happily ever after, but he can propose something that’ll keep Victor in the US and safe. . .marriage He just doesn’t expect his new husband to dance away with his heart.

Victor didn’t even think. If he had thought about it, he would have talked himself out of it, but his body took over, and before he knew it he’d pulled Isaiah into his arms. Nothing sexual, nothing calculated, just an embrace for a man who’d lost something precious and who’d carried the weight of his grief, and the grief of his son, on his shoulders.

Isaiah didn’t fight him, just melted against him, his large arms wrapping around Victor’s body as he allowed the moment to spool out naturally. Victor slowly released the breath he was holding, afraid that any sudden movement would spook Isaiah back into his previous arm’s length regimentation.

The house was quiet, soft music drifting out from the docking station, Evan’s muffled footfalls overhead as he undoubtedly chattered away with his best friend. He curbed his desire to make this more than it was, ignoring the voice in his head that whispered that this was what he always thought having a family would be like. A warm, safe home, children, and a man who loved him, and building a life together.

This wasn’t it, but it was as close to perfect as he was likely to get, so he’d take it. For as long as he could have it. They’d never discussed an end, but the natural end date was when he gained his citizenship. So, three years. Not long, but he’d take it, because Isaiah was quickly getting to him, taking up residence in the part of his heart he’d never thought would be filled.

Pathetic? He didn’t care. Victor was a romantic, something he had in common with Stephen. And look how Stephen had fallen. Victor didn’t have a chance.

The music switched, shifting down into a slower rhythm, not a Latin beat by any measure, but sultry. They began to move together. Victor didn’t make a conscious decision to dance, but it was the language that came most easily to him, and he responded to the natural sway of the embrace.

Isaiah followed his lead, the shuffle of their feet falling easily into a modified variation of the bachata. Limbs pressed against each other, muscles flexing as they moved slowly, finding their own pace. Victor sucked in a breath when Isaiah’s hands ran across the bare skin of his back, callouses dragging and igniting sparks of arousal in their wake. He made a sound, low but audible, and somewhere between a gasp and a moan, prompting his husband to pull back, eyes locked on his own.

Victor was relieved when he didn’t end the exquisite torture, but instead continued to maintain eye contact as they swayed together in the honey-glazed light of the kitchen. He was hard, sure that Isaiah could feel it through the thin material of his sweatpants, because he felt Isaiah’s erection through his dress pants. They shifted against each other, cocks aligning in a way that made the most of the lazy friction, sending ripples of pleasure over his skin and up his spine.

And then Isaiah pulled him closer, and Victor buried his face in the sweet dip of his shoulder, inhaling the scent of laundry detergent, cologne, and the intoxicating smell of his man. Isaiah’s hands dipped lower on his back, fingertips skimming the waistband, the occasional slip below the edge ratcheting his heartbeat up to the point where he knew it could be felt by the man holding him.

“So beautiful.” The words coasted across Victor’s skin, barely above a whisper. “Such a temptation.”

“I’m here for the taking,” Victor replied, his fingers coasting over the nape of Isaiah’s neck just to satisfy the urge to feel skin.

The moment was cloaked in madness, which was the only explanation for his mistake, and he knew it was the last thing he should have said when Isaiah went still, his fingers unconsciously digging into Victor’s hips.

They both pulled back, slowly, stubbled cheek against stubbled cheek, until their mouths were touching. Victor licked against his husband’s soft lips, begging for entrance and diving in when he was granted admission. Spice and sweet lemon and heat were everything in this kiss, more exploration than demand as they held on to each other and gave in.

The remains of dinner were around them, but this was another kind of hunger, and he’d waited too long to have it satisfied. Victor knew how good they could be together, and while he knew they would walk the razor’s edge between emotion and pure physical indulgence, he was willing to risk it. If he fell, then he’d embrace it.

But he knew he’d be falling alone. 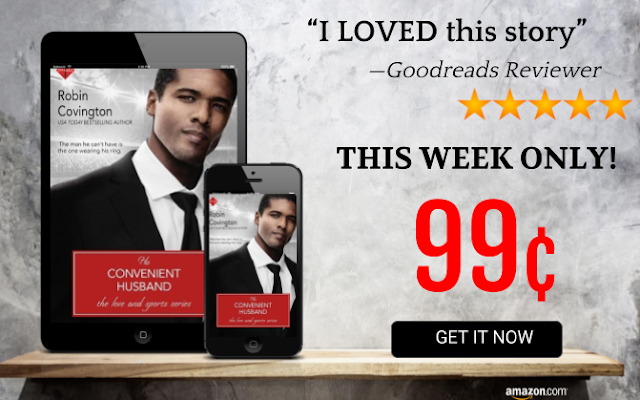 Thanks for reading! If you love my guys as much as I do, drop me a line at robin@robincovingtonromance.com

A USAToday bestseller, Robin Covington loves to explore the theme of fooling around and falling in love in her books. Her stories burn up the sheets. . .one page at a time. When she’s not writing she’s collecting tasty man candy, indulging in a little comic book geek love, hoarding red nail polish and stalking Chris Evans.

A 2016 RITA® Award finalist, Robin’s books have won the National Reader’s Choice and Golden Leaf Awards and finaled in the Romantic Times Reviewer’s Choice, and the Book Seller’s Best.