Sometimes only the wrong guy can bring the
right happy ever after. 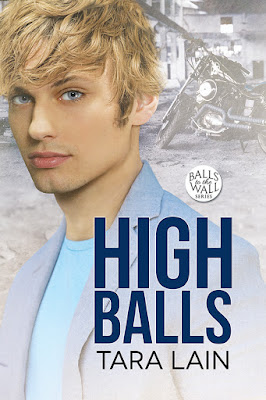 High Balls
(Balls To The Wall Series #6 )
by Tara Lain

Though only twenty-six, single father Theodore Walters lives with his head in the clouds and his feet firmly planted in reality. At the center of his life is Andy, his seven-year-old son, with whom he shares no DNA, though nobody—including his religious-fanatic in-laws—knows that, and Theodore will do anything to keep them from finding out. Theodore works hard to get his PhD and the tenure and salary that might follow to make a better life for Andy—but the head of his department thinks his dissertation on Jane Austen and romance novels is frivolous.

Theodore’s carefully planned life goes off the rails when he walks into a popular Laguna Beach bar and meets the bartender, “Snake” Erasmo, a pierced and tattooed biker who sends Theodore’s imagination—and libido—soaring. Snake has even more secrets than Theodore and couldn’t be a less “appropriate” match, but he might be the only guy with the skills to show Theodore that happily-ever-after is for real.

Teddy looked up and rose.

Andy rubbed his eyes and his nose. “How come you guys are on the floor?”

Teddy smiled and picked up Andy. “I was just surprised and unhappy when Snake told me what your grandparents did.”

“Yeah.” He snuffled and snuggled into his dad’s shoulder.

Teddy sat on the couch and settled Andy on his lap. Snake started to sit in the chair across from them, but Andy looked up. “Snake? Will you sit by me?”

“Sure, buddy.” He glanced at Teddy, who looked up quickly and then away. Snake sat beside Teddy, who held Andy in his arms. Snake took Andy’s feet.

Teddy started to rock him. “So you know about babies coming from mommies, right?”

“Moms might have different possible dads around before their baby is born, but after the baby is born, the mom might choose a dad.” He looked at Snake, pleading in his eyes.

Snake picked up the thread. “It could be that the dad the mom chooses isn’t the same dad that actually caused the baby in the first place. But that doesn’t matter.”

“Right.” Teddy kissed Andy’s hair. “You mom chose me, and we got married right away, and I was there the whole time you were in her tummy, and I saw you get born and loved you when you were barely an idea.”

Snake blinked hard. “That guy who came to talk to you might have caused the baby, but then he was gone, and he never married your mom or helped her or saw you born or raised you—or loved you. So guess who your dad is?”

Andy tightened his grip on Teddy. “Daddy is my dad.”

Andy was quiet for a minute. “But that guy caused me?”

Teddy’s chest rose and fell. “He might have, sweetheart.”

Andy sat back and stared at Teddy with his brows scrunched over his nose. “You didn’t cause me ’cause you don’t like girls, right?”

Snake bit the inside of his cheek.

Teddy smiled. “Kind of. I actually loved your mom a lot. She was my best friend. And when she told me she was going to have a baby, I said maybe I could be the dad. She loved that idea, and we had such a good time raising you.”

“Wish I remembered her better.”

Snake had to look away or Andy might see the tears pushing out of his eyes.

“She loved you so much. Just like I do.” Teddy hugged him tight.

Hi. I’m Tara Lain and I’m delighted to be here celebrating my brand new book in the Balls to the Wall series, High Balls. You may have heard me say in the past that titles are really important to me and I usually create them before I write the book – sometimes before I even know what the story is.

For example, back in 2011, I knew I wanted to write a book that involved a black cat. That’s all I knew. Black cats are often associated with witches so I decided to write a witch paranormal. I know a fair amount about the witch trials so I thought it would be fun to embed some of that information in the book. What if the hero witch is – a teacher? Like a college professor who teaches a class on witchcraft? Hmmm. Teacher, witch, cat. Yes! The title Spell Cat was born, before a word had landed on the page.

The first book in the Balls to the Wall series was originally going to be called David, Gareth and Goliath. I decided that title wasn’t beachy enough and played with the fact that two of the heroes are volleyball players. Hmm. Fun to separate the words and make it a little provocative. Volley Balls. That became the title of a book that started a Balls cascade. As soon as book 2, Fire Balls, became a bestseller, people started sending me ideas for Balls titles. I literally received many dozens of them. I sure am glad I changed that name!

When I decided to write a new story in the series I played with all the many Balls titles I could think of.  High Balls kept coming up for me (pardon the pun). What if, I thought, my hero meets his love in a bar and what if the guy is the – bartender? Okay, so my hero has to be somebody unexpected to match up with this bartender. So I created a nervous, serious, young PhD candidate whose life is focused on his seven year old son and defending his dissertation, who falls head over balls for a tattooed bartender named – Snake!

Writing High Balls was literally a ball since I got to create two brand new heroes but still include all the guys from the past books. I hope you love the story the title suggested! 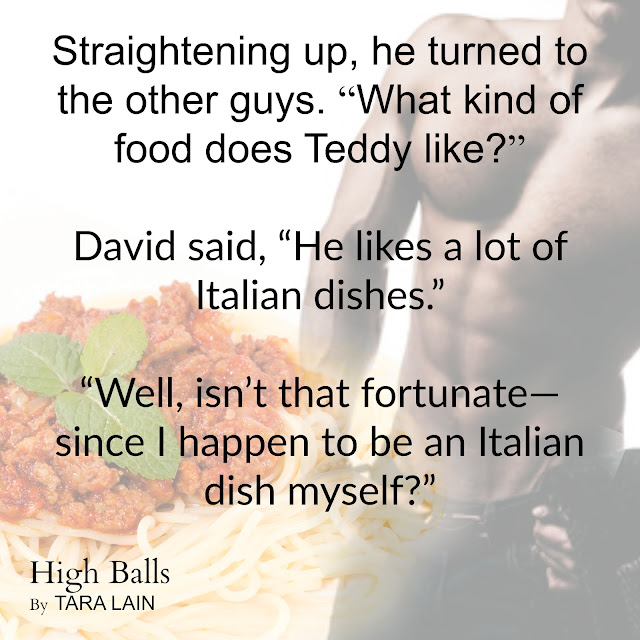 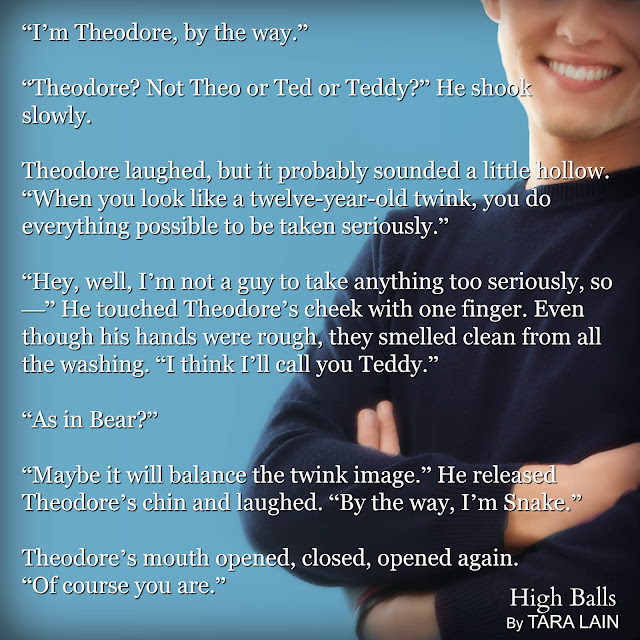