Joker by J.M Dabney - Blog Tour with Review and Giveaway 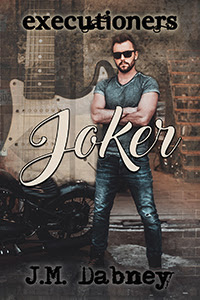 Joker, what a misnomer, but Jackson Webb’s friends were idiots. He’d joined Executioners almost three years earlier after the lead singer King caught him playing his guitar behind his garage. It broke up the monotony of his life, but once he got bored, he’d move on to another distraction. He wasn’t nice. He sure as hell wasn’t friendly. He was what he was, his friends handled his attitude and standoffish nature just fine. At thirty-eight he was pretty sure he was too stuck in his ways to change shit now.

Demetri “Dem” Urban was settling into a new life in the middle of nowhere. Okay, he was hiding from everyone in a kitchen as far removed from his five-star kitchen back in New York as he could get. Gideon invited him to stay with him and his wife for a while just until he could get everything back on track. He didn’t see it happening, but he had to admit the scenery wasn’t bad even if the man had the personality of a rabid, man-eating bear. Dem did like a challenge and that fit Joker Webb perfectly.

Author's Note: This story contains scenes of a violent nature, mentions of rape and torture (All off page from characters pasts) and severe abuse. If you, as a reader, find this objectionable or triggering in any way, you can skip this story without losing the transition to the next book.

Joker is the second book in the Executioners series. This book is part of a larger story arc that started with Twirled World Ink and continued on in Brawlers and now the Executioners. While you could read them as a standalone, I recommend reading all of them from the first Twirled World Ink book through to this one. Many of the characters make repeat appearances in the other books.

Joker is a total product of his childhood and all the damage it did to him to shape him into the man he is now.  We've seen a lot of that in the previous books with his aversion to touch, and no one coming up behind him, no aggressive moves, and so on. Well that is until Demitri starts hammering away at Joker's rock hard shell to get to the person hiding underneath. At first these two are like the proverbial oil and water... if water could growl and get pissy every time you spoke to it.  Eventually Demitri's attempts start to break through Joker's closed off self and more and more comes to light about who he is and why. Of course this also leads to some sexy, growly bear times between them and then into more than just sex.

I've got to say I totally fell in adoring love with Dem, between his conquer everything personality to his indomitable strength while dealing with his own physical limitations and of course Joker's oh so pleasant self. Dem holds absolutely NOTHING back in breaking down Joker's walls, and also in his own wants and needs.  Joker grew on me throughout the story and by the end I wanted him and Dem happy together.

This story is very different from Ghost, the first book in this series, but just as good of a story. It focused on two characters who had their own issues that needed to be overcome, and then finally leading to their HEA. I really did end up enjoying the story overall even if there were times I wanted to thump Joker. He and Dem really work together as a couple and were ultimately perfect for each other.

I think this is going to be a story that you're going to feel one of two ways about Joker, but I'll tell you to hang in there and enjoy the story because it's worth making it to the ending. And of course it sets us up for the next book in the series. I recommend this for any of this author's fans and fans of this series, but also anyone that loves a growly, grumpy ass of a man who in the end allows himself to love and be loved in the best way possible.

I look forward to reading many more books by this author, they have quickly become one of my autobuy favorites.