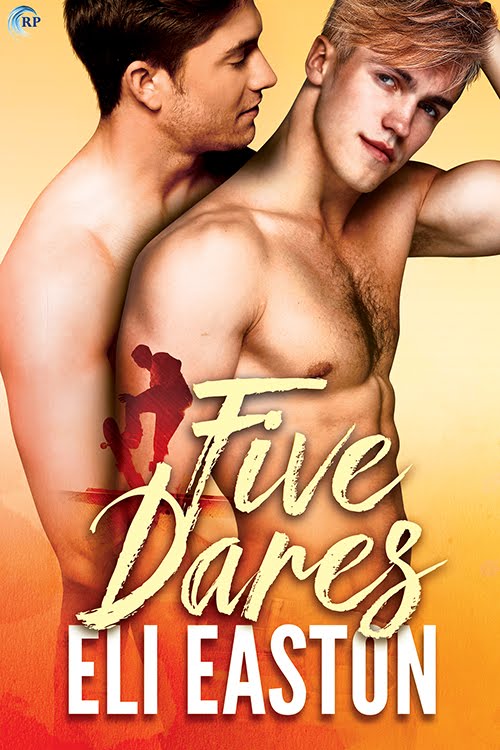 Andy Tyler has been the class daredevil since middle school. Over the years, he’s convinced his best friend, Jake Masterson, to perform some dangerous-looking stunts with him. But the dare they attempt on the night of their college graduation goes sideways. The firecrackers explode too soon and both of them end up with badly burned palms.

But hey, nothing gets the “terrible two-o” down for long, and they recuperate in style at Andy’s family cottage in Cape Cod. As the weeks go by, both Andy and Jake grow frustrated over the inability to use their hands for all sorts of daily activities—including getting off. So Andy begins a new series of dares that don’t just cross the friendship line, they obliterate it.

But what might be mere sexual relief to Andy is serious business to Jake, who only recently got over years of secret pining for his straight best friend. Inevitably, the burns heal, summer ends, and hearts are broken. To fix things, Andy will have to face the greatest dare of all.

My Inspiration for Five Dares
By Eli Easton

On October 2nd my book “Five Dares” comes out from Riptide Publishing. It’s a college age romance with a simple premise. Two lifelong best friends are stuck in a cottage over the summer with burnt hands after a dare-turned-wrong with firecrackers.  With no use of their hands, the two begin to experiment sexually with each other. This is purely a practical matter of course! At least, it starts out that way.

Random people always ask me how I come up with the ideas for my books. Often times, it’s a mix of elements and glimmers that end up getting mixed up and resulting in a book. And then, of course, once you are actually writing it, the story and characters develop and take on a life of their own beyond those original inspirations. But the following items were the early glimmers that created “Five Dares”.

This book is one that has been on my “idea list” for ages. I’d say at least 4 years. The original idea was for a book about two friends who have injured hands and so they help each other get off. That was the entire idea as written on my list.

In romance, we all know there are dozens of reused tropes. Their popularity comes and goes. The Billionare, the step-brother, the boss and secretary, the father and the many, the best friends to lovers, the prince in disguise, the ‘kiss or die’, etc. The “injured hands” (or otherwise somehow unable to get oneself off) trope is one of the most underused, in my opinion. Like omegaverse, I first ran across this trope in fan fiction, and I really think it’s fun and compelling. I love the idea of two characters sort of forced into a sexual scenario who then realize maybe they are made for each other. And/or it provides the excuse for experimentation that they both wanted all along. So that’s the first inspiration for “Five Dares”– fan fiction “injured hands” stories.

My all-time favorite in this genre is in the Sherlock universe. The story is “Curious Case” by Cleo2010. You can read it here on Archive of our own:
http://archiveofourown.org/works/333574/chapters/538814

The cover for this fic, below, was created by me when I was a member of the fandom as XistentialAngst. 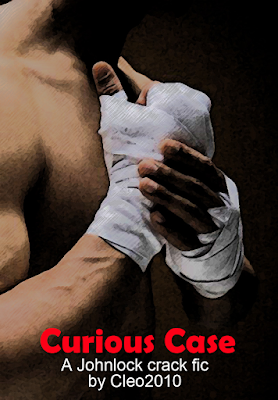 In “Curious Case”, Sherlock’s hands are injured on a case and he asks John (Watson) to help him out while his hands heal. In the story, Sherlock gets exceedingly testy if he can’t relieve himself often. It’s a fun story if you enjoy johnlock fan fiction.

To complicate matters though, I decided I wanted both of my main characters to have injured hands, not just one.  Tricksy!

When I finally sat down this past winter to work on my “injured hands” fic, I had to come up with believable characters and a believable scenario. How could both of my “best friend” characters end up with injured hands at the same time?

Clearly, their injuries had to happen at the same moment, and for the same reason, or it would be a huge coincidence.  I could have gone with a car accident, but that seemed unlikely to injure just their hands, plus it’s boring. I decided I needed a stunt of some sort, like a dare. Something that would burn their hands. Firecrackers?

Necessity is the mother of invention, and once I realized my boys were daredevils, it influenced so much of the plot and the characterization in the book. Andy and Jake are adrenaline junkies, hoodie and skateboarding sorts of boys. But I wanted to avoid making them just stupidly reckless.  With a set-up like them both holding lit firecrackers, they could easily have come off as Darwin Award recipients, empty-headed macho men, the sort you read about in the weird news sections like the Australian guy who cut off his own head with a chainsaw. Just. No.

In order to avoid having their dares seem merely dumb, I needed them to be smart and more artsy about it. My inspiration was edgy magicians like Criss Angel and David Blane. One of my guys, Andy, is a huge fan of this kind of avant garde illusionist. And that gives his dares more of a mentalist tone, more substance. He prepares these stunts in advance. He knows what he’s doing. Usually! Check out the cool promo for Criss Angel below.  This is the sort of thing that rev’s Andy’s engine. 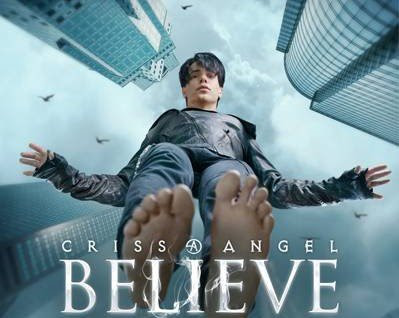 Inspiration #3:  Him by Sarina Bowen and Elle Kennedy

I’m going to list this book as an inspiration because when I read it at the end of last year, I adored it! It reminded me of how much I love the self-discovery and sexual exploration of college-age romances. I myself have written them in the past (“Blame it on the Mistletoe”, “Unwrapping Hank”, and more), but in the past few years I’ve been focused on older characters and a few May-December romances.

I’d promised a book to Riptide, and I knew I wanted it to be something contemporary and very “mainstream”.  Reading “Him” inspired me to think, “Okay, yeah, it’s gotta be a college age romance, friends-to-lovers, with at least one of them previously thinking he was straight and turning out bi.” That’s when I looked over my idea list and thought my “injured hands” fic could be set in the collage years. Voila.

If you haven’t read “Him” yet, I recommend it! 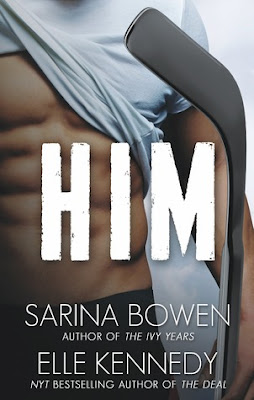 I fell in love with this TV series this past winter, about the time I was working on “Five Dares”. This show is a thriller/mystery series with a teen gay romance as a subplot. In the show, one boy is a foster kid who moves to a remote community and the other boy is a popular jock at his new school. They’re attracted to each other, but the local jock character is deeply closeted and hates the idea he might be gay. They’re together when they witness a murder and they can’t tell anyone because they don’t want people to know they were together.  It’s a great TV series. I love thrillers, but the romance was the highlight of the show for me.

Philip (played by Tyler Young) and Lukas (played by James Paxton) stole my heart and their passion added some oomph to my writing of Andy and Jake. I began to see Andy (blond, like Lukas) and Jake (dark-haired, like Philip) as the actors in my mind’s eye.  The pairs have different backgrounds and are very different people, but Eyewitness definitely had some emotional influence on “Five Dares”. 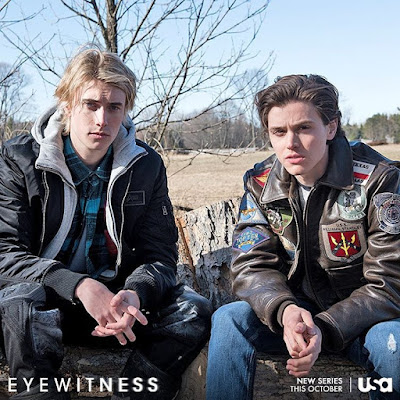 Thanks for sticking with me for this walk down inspiration lane. I hope you enjoy “Five Dares”  soon. I love writing for this genre, and I’m honored to have readers who appreciate my books.

Having been, at various times and under different names, a minister’s daughter, a computer programmer, a game designer, an author of paranormal thrillers, a fan-fiction writer, an organic farmer, and a profound sleeper, Eli Easton is happy these days writing love stories.

As an avid reader of such, she is tinkled pink when an author manages to combine literary merit, vast stores of humor, melting hotness, and eye-dabbing sweetness into one story. She promises to strive to achieve most of that most of the time. She currently lives on a farm in Lancaster County, Pennsylvania, with her husband, three bulldogs, two cows, a cat, and a potbellied pig. She enjoys reading in all genres and, when she can be pried away from her iPad, hiking and biking.

Eli Easton has published 24 books in m/m romance since 2013. She won the Rainbow Award for Best Contemporary Romance in 2014 (The Mating of Michael) and in 2016 (A Second Harvest). Her Howl at the Moon series of humorous dog shifter romances have become fan favorites and placed in the Rainbow Awards and the Goodreads M/M Group Reader’s Choice awards. She is best known for romances with humor and a lot of heart.

To celebrate the release of Five Dares, one lucky winner will receive a $20 Riptide gift card! Leave a comment with your contact info to enter the contest. Entries close at midnight, Eastern time, on October 7, 2017. Contest is NOT restricted to U.S. entries. Thanks for following the tour, and don’t forget to leave your contact info!