The Watcher by Louise James - Release Day Blitz with Excerpt

A classic struggle between good vs. evil! 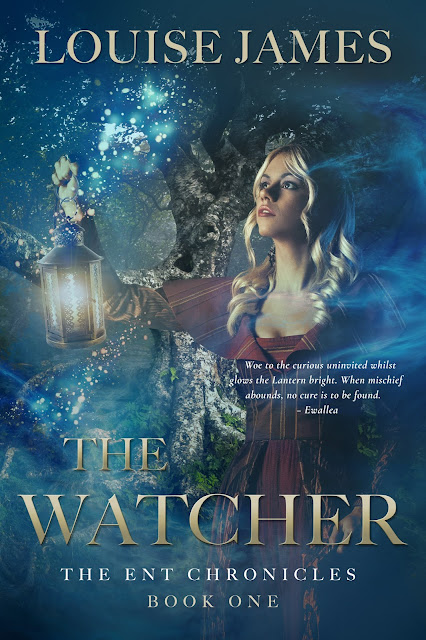 The Watcher
(The Ent Chronicles Series, Bk 1)
by Louise James

Long ago a powerful coalition of wizards and witches—The Seven—began a quest to recover hallowed grounds in the Earthling Realm. The day had arrived to claim Hailstone Hamlet! A Dark Wizard, Lord Haydron expects no one to survive the destruction, but he was wrong.

An apprentice Healer miraculously survives with no memory of what occurred but, why was she spared?

Unexpectedly, her locket opens as if by magik, and a cheery old woman speaking in a funny accent appears.

“Come for ye have I. Away from here ye must stay.
Troubles come with darkness of night; The Watcher protects and The Lantern lights.”

Ewallea assures her that she will remain by her side as they seek answers. Overwhelmed and injured, Amellea passes out only to wake in the arms of a handsome young man, riding upon the most beautiful creature she had ever seen. The Hunter believes she was spared for a purpose and their destinies are entwined. He pledges to help her locate friends and family.

The feisty beauty and her new companions find themselves on a journey of unexpected adventures to reach an enchanted forest, filled with mischievous fantastical creatures.

Join the Halloween Release Day Party!!
Click here to celebrate the release and have lots fun!

Suddenly, Amellea was all alone in a dream…or she was hallucinating again, she guessed. No one was with her in the forest. The night was bright below a starlit sky. The cool, crisp air was filled with a heady, hypnotic smell from flowers she could not identify.
Startled, Amellea saw three lights she thought must be fireflies zoom past her. The lights glowed and circled around her until they appeared to be a single, large, glowing light. Were those wings she saw? No, it can’t be. She’d heard legends about fairies, but she had never seen one.
“Legends, humph!” Then, right out of thin air, materialized three beautiful creatures who were no doubt Fairies, glowing as though a light followed them while casting glitter about with each step they took. Amellea was face-to-face with real Fairies—three, to be precise! “Amazing…”
“Hootie-whooo, look at you! Sisters, I think she is a beauty, even to rival our Ewa. Well, do you have anything to say for yourself?” The surly Nymph pranced around Amellea, inspecting her. Amellea just watched, completely dumbfounded, as the glowing Fairy addressed her.
“Lylahbelle, honestly! Do not taunt the fair maiden. Can’t you see she has been hurt? She’s had a terrible shock!” Annabelle, the dark-haired Nymph and clearly the oldest of the three sisters, chided.
“Merabelle is not jealous. No, you would not even look at a Halfling sideways, even if he is Chief Hunter and leader of the RealmWalkers.
Are you Annabelle? This one certainly does enjoy the comforts of Maleek’s strong arms. He seems to enjoy looking at her, too. Her hair is the color of sunset and soft as corn silk.”
Lylahbelle continued her inspection of Amellea, touching her hair. “But…it is very tangled.”
Merabelle sensed explosive energy radiating off Amellea. The two Nymphs looked at each other, and with a nod, they grabbed Amellea’s arms, preventing her swing from contacting with Lylahbelle’s face.
Amellea struggled and could not free her arms from the delicate but very strong Nymphs. Electric sparks snapped and crackled around them.
“Why did you try to hurt me…you, you, you dirty Earthling?” Lylahbelle thought.  You will pay dearly for this indiscretion; if not today, very soon.
“Uh-oh…we are being summoned.” Annabelle and Merabelle released her arms and stepped closer to Lylahbelle.
“I don’t think I like Fairies at all; you are rude!” Amellea stomped her foot. Annabelle and Merabelle looked at each other, moving between the adversaries and stepping closer to Lylahbelle.
“Uh-oh, this can’t be good!” Merabelle exclaimed, reaching for her sister. She could see the volcanic tongue-lashing Lylah had planned to explode on Amellea.
“We. Are. Not. Peedie. Folk. Thank. You. Very. Much!” Lylahbelle screamed. “Nymphs are who we are. I could sing you straight to your death! You silly Earthlings know nothing of the power we wield.”
Amellea straightened her shoulders, rising to her full height, albeit shorter than the Nymph. “No. I just decided. I don’t like ‘Nymphs,’ if they are as rude as you are, Lylahbelle! Now you three get out of my ‘dream’ or ‘head’ before I punch ‘you,’ Lylah, in the face. You just go wherever you came from before I use some of this electricity pouring out of my hands and zap you with it!”
Amellea wiggled her fingers, reaching out toward the Nymph as sparks crackled from the tips. “I hope I have this Magik gift when I am awake. It might come in handy.”
“The Earthlings do not know much about Magik folk. I am sure she meant no harm, Lylah. Do not continue to provoke her now, because we have work to do. The Watcher calls, sisters. We must not delay,” Annabelle spoke with authority and smiled kindly at Amellea.
“We three will receive Ewa’s ire when she finds out we visited the Earthling’s dreams. She warned us to be on our best behavior, sisters.” Annabelle reached for her sisters’ hands, moving a safe distance away from Amellea. The Nymphs rotated in a circle as the clock hands moved once, then rotated in the opposite direction twice, repeating the motion faster and faster. With each rotation, the three became smaller and smaller until they were just tiny glowing dots. Fireflies, just like the first time Amellea saw the Nymphs.
“Quick! Hit her with the dust so she will go back to sleep, thinking this was all a bad dream. Don’t use too little dust or she will remember us when she wakes!” cautioned Annabelle, but Lylahbelle smirked and shook her wings vigorously as the three retreated to see the Watcher.
“I know just what to dust her with, sisters! I have the perfect remedy!”
Lylahbelle had no qualms about using the strongest sleep remedy she knew to take care of Amellea. She could be the next Sleeping Beauty. Her sisters could not blame her for taking care of an Earthling slandering her race and attempting to harm her. No matter if she deserved it. Ewallea would never know, unless her palsy-walsy sister, Merabelle, spilled the beans.
“My goose is cooked. Merabelle will spill. I better lay low for a while until this all blows over.” Lylah had a plan. 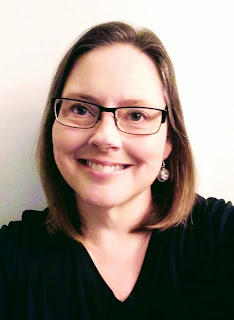 I am a creative, loquacious Southern artist who has always liked to tell a good story. After I retired as a public and collegiate art educator, I needed to reinvent myself.  Thanks to the encouragement of professionals, friends and family, and God’s amazing grace, I have found a new passion—writing fantasy and paranormal stories.
I have always been a mental traveler, reading books and physically traveling across much of the USA and Canada. I have been actively writing for three years, publishing late in 2017. It is my hope that my novels reach across generations, entertaining multiple audiences. I want my readers to escape through fantasy to mentally travel to other worlds and to find a smile, friend or foe written between the pages of the stories I write. It is my sincere hope you enjoy reading as much as I enjoy writing! –lj

You can connect with Louise James at