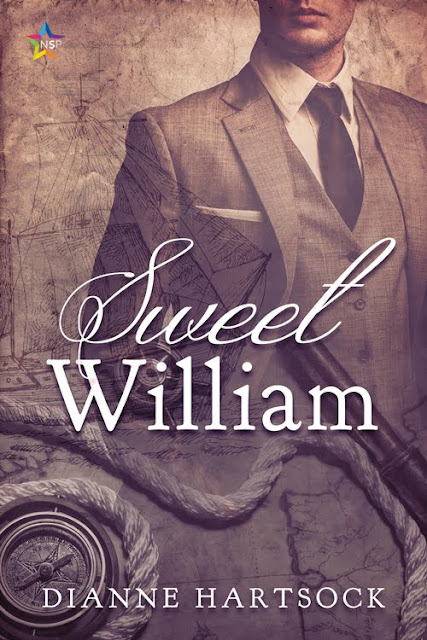 William Wilkerson leads the life of the privileged rich. Head of his father’s shipping business, he indulges to his heart’s content in the pleasures of the flesh with Boston’s finest young men.

That is, until he reunites with Fredrick: his former tutor and the one man who captured his heart. But William’s father has declared Fredrick off limits. And Fredrick, himself, believes he’s beneath the attention of the Wilkerson heir.

After having lost his current pupil to graduation, and with no prospects of a replacement, Frederick is homeless, hungry, and easy pickings for the men on the docks. When Frederick is shanghaied into service on William’s own merchant ship, will William discover his plight in time to rescue him?

Fredrick held up his glass and stared at the candle’s flame through the amber liquid. He took a sip and savored the rich, biting taste on his tongue, welcoming the burn down his throat. This was the very last drink he could afford, and he had to enjoy it.

A giggle erupted from someone out of sight on the back staircase, and a smile tugged his lips, despite the dire state of his wallet. The laugh had been carefree, joyous, naughty.
Fredrick shifted on the cushioned bench. The lunch hour had passed, and he was the only customer in the dining room. He wondered if the innkeeper up front would notice if he adjusted his cramped cock as it throbbed in sympathy with the bright laughter that reminded him of his own ardent affair.

Rather than risk it, he watched the fruit vender outside the window beguile a customer. Another giggle and stifled moan floated down to him and he grinned, even though the laughter emphasized his own loneliness. It had been far too long since he’d had someone in his bed.

Fredrick looked up at the clatter of footsteps, distracted from his memory of lush lips, white skin, and wide hazel eyes. He caught a glimpse of red hair and an embarrassed cheek before the gentleman crammed a hat on his head.

“Damned Wilkerson,” the man muttered as he passed him, face averted.

With conscious effort, Fredrick loosened his hold on his glass, but he had no way to stop the wild hammering of his heart. Wilkerson? Could it really be…? Perhaps not, but the Wilkerson family he knew had strong ties to Boston. At least, the father often traveled there. But did William come now? He had to know. Before he lost his courage, he stood and swallowed the last of the brandy and then crossed the room to the staircase.

He shook his head at his eagerness. It had been three years, after all, and they’d parted in anger. Would William acknowledge him? A man stepped onto the landing and Fredrick allowed his gaze to travel up the white spats and checkered trousers. Blood heated his face when he found the silk vest and shirt open at the throat to expose soft white skin.

A sigh brought his gaze up to the attractive face that stirred his dreams. Rich brown curls surrounded lovely hazel eyes and full, pouting lips. Panic swept the pretty face, and then a delighted smile revealed the even white teeth that had nipped his collarbone on more than one glorious occasion.

He hasn’t forgotten! Fredrick stored away the joy to visit later. God knew his pleasures were few and far between these days. “How are you, William? I had no idea you came to Boston.”
“On occasion.” William stepped off the landing, only a slight sway in his lean body betraying his inebriation. Fredrick’s heart skipped. The top of William’s head barely reached his shoulders—perfect for Fredrick to rest his chin on if he gathered him close. To his surprise, William didn’t hesitate, clasping Fredrick in his arms and stretching for a light kiss.
Fredrick’s hold tightened instinctively, but William didn’t seem to mind, winding his arms around Fredrick’s neck. He licked Fredrick’s lips, his sweet tongue seeking entrance.

Fredrick laughed, breathless with the need that swept him, but moved his head back, denying the kisses sure to topple the defenses he’d built against this man.

He chuckled wryly at William’s delicious pout. “You promised not to tease me.”

“That was years ago. I made no promises today.” William nibbled at Fredrick’s lips, but eased away when he resisted.

Fredrick glanced over his shoulder at the innkeeper watching them. “William, what are you about? Anyone could have seen you. This is dangerous—”

“It was only a few kisses, but perhaps you’re right.” A scowl darkened William’s face. “The proprietor is paid handsomely for his discretion, but it’s possible I’m growing careless.”

Distracted by William’s open shirt, Fredrick closed his hands into fists to resist the urge to embrace him again. Memories stirred of the slide of fabric under his fingers: images of cool sheets and creamy skin. He longed to run his tongue down the exposed flesh of William’s neck and revisit the delights he’d enjoyed, once upon a time.
“How is Lord Wilkerson these days?” he asked instead, throwing that barrier between them. A shutter seemed to close on William’s eyes, his gaze becoming less warm. In sudden panic, Fredrick touched his arm, afraid William would walk away. “Forgive me. This is hard for me.”

He trembled when William put a hand over his. “For me, as well, darling. I had no idea you lived in Boston.”

“Or you would have stayed away?” Fredrick regretted the jealous words the instant they left his lips and looked aside to hide the blush he knew reddened his face. He always played the fool with William.

“My father’s been ill for some time. I’ve taken control of the shipping portion of the estate and come to Boston from time to time to check the wares from the Orient. We managed without incident these past ten years, since eighteen seventy-four, but recently we’ve had an increase in damaged goods. My presence at the docks seems to deter clumsiness.”

“Of course.” Fredrick chewed his lips as he searched for something to say, his heart heavy.

“And what is my former teacher doing in this wild town?” William asked, his voice kind.
Fredrick shrugged, not about to tell him he’d run as far from William as he could when Lord Wilkerson had humiliated and dismissed him. “I’ve been tutoring Lord Anadaile’s daughter.”

“For truth? That must be hell on earth. A more spoiled child I’ve yet to meet.”

“She has a good heart, but this position is soon over, anyway. Miss Cynthia comes of age next month, with her debutant party in June. No need for me after that.”

A cough from the innkeeper at the far end of the room caught their attention. As if recalling his state of undress, William buttoned his shirt and did up his vest. Fredrick groaned inwardly as he remembered doing similar service for William after an afternoon spent undressing him.

William gave a brilliant smile as if sharing the memory and took Fredrick’s hand. “Will you have a drink with me at the club?”

Longing almost overcame discretion, but the barrier of their positions couldn’t be ignored, by either side. “Forgive me. I’m not dressed appropriately for your friends.”

William’s beautiful eyes widened as if seeing the frayed brown suit for the first time. Fredrick’s heart warmed. William had the fine trait of seeing a man behind his outward trappings. Rank held little interest for him. For an instant, the ugly thought that William could well afford the fine principle pricked him, but he knew it was his own poverty that prompted the emotion. William had a true heart.

He watched in fascination as a blush tinted William’s porcelain cheeks. William kept his gaze on their clasped hands, and his words started an ache in Fredrick’s chest. “Damn convention and society can go to hell. I’ve missed you, Freddie. I want to see you. Not at the club, and not here.” A flirtatious glance. “I wouldn’t want to bring scandal to my favorite tutor.”

William leaned up and kissed Fredrick full on the mouth. A sweet tongue slid passed his lips to tangle with his, tasting and teasing. Caught unawares, Fredrick opened to him, drowned in memories of sultry afternoons, bodies entwined. William’s scent surrounded him, spiced with tobacco and whiskey and expensive cologne. Underneath, there was the heady fragrance of heated skin.

Fredrick groaned as lust swamped his defenses. His cock swelled to life for its lover, ached for the touch it had missed for far too many lonely nights. He returned William’s kiss with fervor, forgetting where they were, his position, everything but the need to taste again this man he loved with all his being.

William broke off their kiss and leaned against the wall, his chest heaving. They stared at one another and Fredrick bit hard on his lip. Dearest Lord! William stood before him, everything he desired in life, intelligent and beautiful. Mine! Fredrick’s heart broke, while agony twisted in his gut. He had nothing to offer the eldest son of one of New England’s finest families. He’d known that three years ago. Nothing had changed his circumstances.
William had always been able to read him, and he set his pretty lips in a firm line. “I’m in Boston through the week. I want to see you, Freddie. Please don’t be cruel. Meet me at the pier in two hours.”

His protest went unheard. With a flash of anger in his eyes, William strode past him without another word. 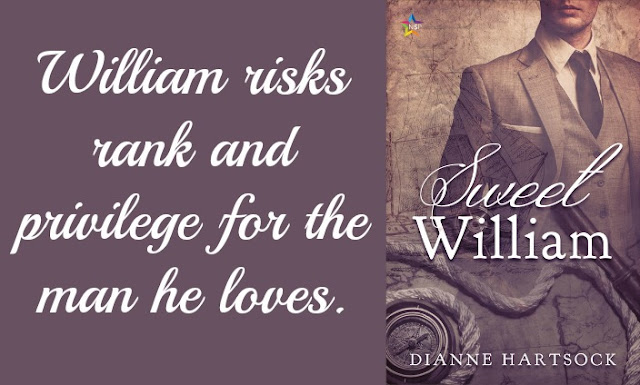 Dianne is the author of paranormal/suspense, fantasy adventure, m/m romance, the occasional thriller, and anything else that comes to mind. She lives in the beautiful Willamette Valley of Oregon with her incredibly patient husband, who puts up with the endless hours she spends hunched over the keyboard letting her characters play. She says Oregon’s raindrops are the perfect setting in which to write. There’s something about being cooped up in the house with a fire crackling on the hearth and a cup of hot coffee warming her hands, which kindles her imagination.