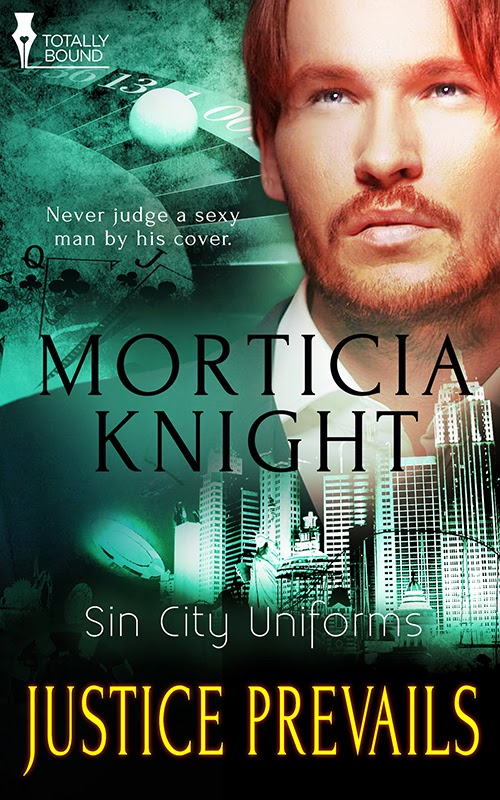 Never judge a sexy man by his cover.

Detective Beau Williams is hard-working, dedicated, and professional. He enjoys the finer things in life, but with his heavy caseload that includes what Beau suspects is a new serial killer, he has no time to enjoy much of anything. What the tall redhead needs is someone to shake him up a little.

Investigative Technician Austin Kent never met a snarky joke he didn’t like - or a set of stairs that couldn’t trip him up. One night after a devastating episode at work, Austin sees something else he likes - the handsome detective he’s seen around the station whom he’s always wondered about. But after he makes a drunken fool of himself in front of Detective Williams, he’s sure there’s no hope.

Beau and Austin’s worlds collide right away when Austin is sent to pick up some evidence at the station. Amidst a myriad of twists and turns in the troubling serial killer style murders of Vegas conventioneers, Austin and Beau discover that there’s more to the other than they’d originally thought. There might even be more they’d like to give – unless the killer has the final say.

Yeah. That’s it.
He raised his glass in the direction of the bartender who was at the far end of the polished wood counter. The server jerked his chin at Austin in acknowledgement. Soon enough, another double filled his glass and Austin realized just how horny he really was. Hadn’t he heard or read somewhere that it was common for people to fuck after attending a funeral? Something about it being life affirming or some such shit.
Whatever.
It wasn’t likely he’d find anyone at El Lagarto. It was mostly crowds of friends or het couples. The few lone guys at the bar not only didn’t do much for him, but even if they were gay, they’d be more likely to inspire the desire in him to never have sex again.
Jesus. Do I look like that to other men?
He took a surreptitious glance at himself in the mirror at the back of the bar. He needed a haircut for sure. He wasn’t the most handsome guy on the planet, but he was okay. He frowned. He was mid-thirties, not a hundred and seven. He worked out and didn’t have a paunch, despite the amount of crappy food and alcohol he ingested. The worry lines between his brow and decorating his forehead didn’t do him any favors, but he didn’t think he was hideous.
Who gives a fuck.
His original goal for the night had simply involved getting plastered while surrounded by some of his rowdy friends. They were supposed to be there to shield him from pesky thoughts poking at the edges of his sanity that involved dead friends. Nowhere in his mind had he planned on getting laid—which explained his casual button-up and 501s. If he’d wanted to pursue some quality tail, he would’ve opted for something classier and headed to the Pink Palace. That place had never failed him.
His arm was jostled slightly and he turned to see who’d brushed up against him—wondering if one of his buddies had relented and joined him after all. He glanced up at a very tall and striking red-haired guy with a beard and moustache. The man regarded him.
“Sorry, I didn’t mean to bump into you.” He chuckled. “Bit crowded tonight.”
The sound of his voice went right to the end of Austin’s dick. He wouldn’t mind some of that. Reminding himself that he wasn’t at the Pink Palace, he reined in his dirty thoughts as much as the booze coursing through his system would allow.
“It’s cool.”
Um. Now what.
“Soooo…” When there was no immediate indicator that a guy was swinging his way, it always left Austin in a quandary. He needed to be subtle, not act like it was a come-on in case the dude was as straight as an arrow. “Here with some friends or by yourself?”
Shit. Like that wasn’t blatant.
His quarry peered down at him, the redhead’s eyebrows arching. “Uh, yeah. With friends.”
Wait a minute. I know this guy.
“Hey. You’re Detective…um…shit…” He tried to get his soaked brain cells to squeeze out Red’s name.
The guy snorted. “No, you must have me confused with another Detective Shit.”

When not indulging in her passion for books, she loves the outdoors, film and music. Once upon a time she was the singer in an indie rock band that toured the West Coast and charted on U.S. college radio. She is currently working on more installments of Sin City Uniforms and The Hampton Road Club, as well as the follow-up to Bryan and Aubrey's story from Rockin' the Alternative. 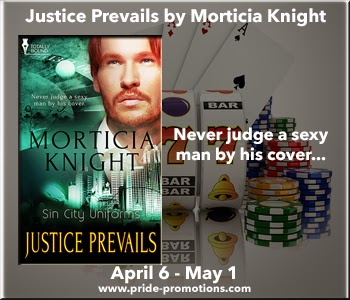 1-May
Iyana Jenna
Elisa - My Reviews and Ramblings