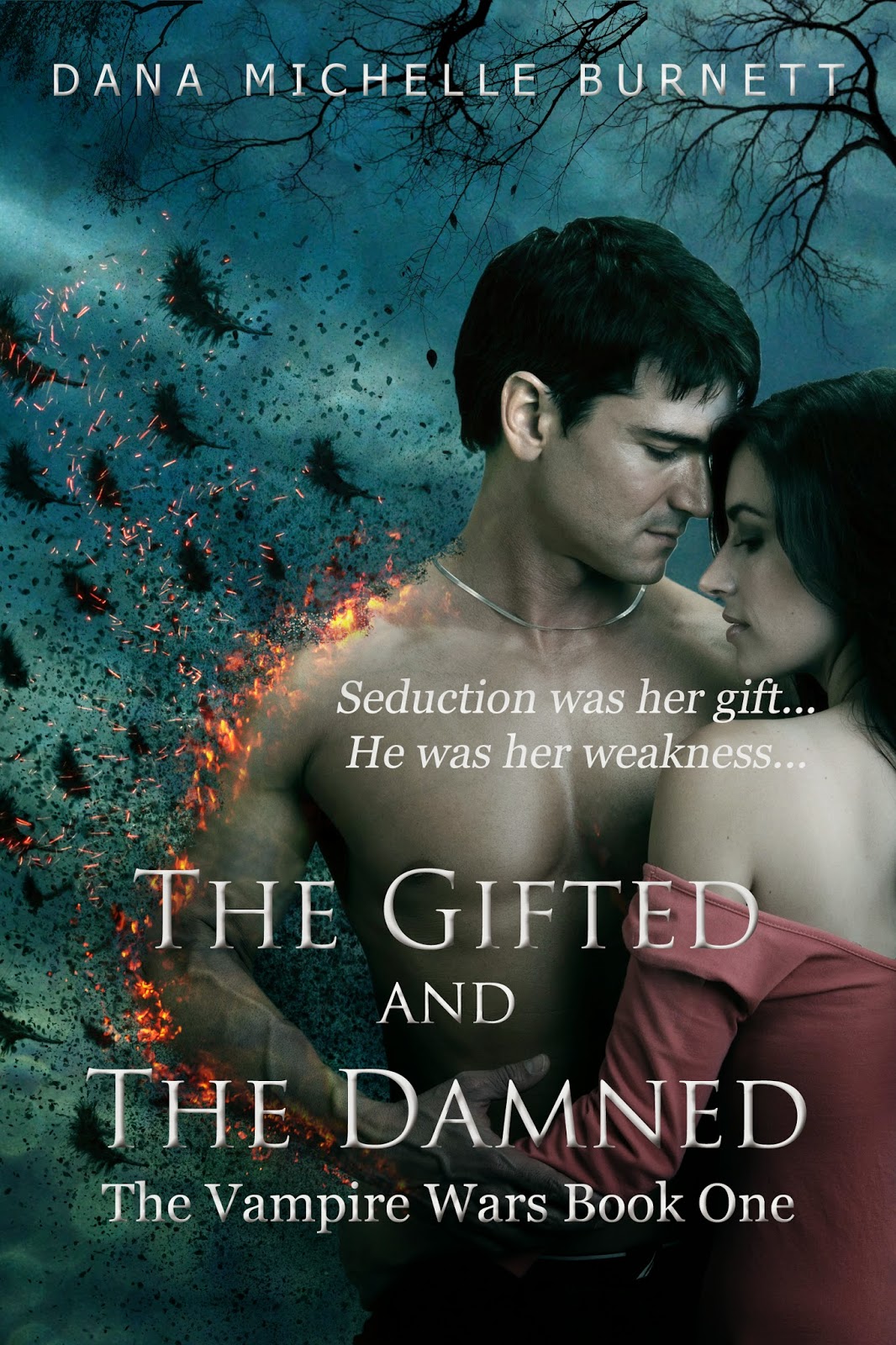 The Gifted and The Damned
(The Vampire Wars Series, Book #1)
by Dana Michelle Burnett

Blurb:
Seduction was her gift...He was her weakness...
In the small town of Corydon Indiana, witches, seers, and shape shifters live hidden from the everyday world in plain sight. They live under the constant memory of the trials of Salem and live by a code of secrecy.

Ruby Malone, the only siren ever born to her family of witches, held the hearts of many men in the palm of her hand, making her the talk of the supernatural community, but there was only one man that she wanted. Making seer Archer Wallace hers was the only thing Ruby cared about until a war between the gifted and the vampires turned her world upside down.

Suddenly, the world that Ruby knows is gone. Archer is off fighting in the war and Poe Corvus, a rebellious shape shifter with a past, tempts her to be the siren she was born to be.

All throughout the morning, I did what I could for the wounded using all of our meager first aid supplies and then finally just tearing the bed sheets into long strips and using those for bandages. I asked every person that was cognitive enough for news.

“Where are the vampires? Are they going to take the city?”

“Losing?” I tried to let the implications of that word sink in. We were losing... The vampires were going to win...

I looked at all the wounded and dying, seeing what the vampires were capable of and felt sick. “What am I supposed to do?”

“What can any of us do? Just wait them out.”

Wait them out? We’re losing the war... And tonight the vampires will come and they will smell all of this blood...

I wiped the sweat from my brow and shook my head, “You all can’t stay here. It’s just... There’s so much blood...”

“I understand,” the leader said. “Let us rest for an hour or so, and those of us that can walk will start leaving.”

He looked around at the people sleeping or unable to sleep because they were writhing in agony, “I've put a call out. Cars will be coming shortly to get the ones that can’t leave on their own.”

The morning dragged on into the afternoon, the groans of the wounded and the whimpers of the dying created a constant hum that filled the air and pushed everything else out. I carried glasses of water back and forth, stepping over those lying in the floor as I moved from room to room.

I didn't even know were Melina was anymore and I didn't care. All I did was wrap clumsy bandages and dish out what food we had. The sun sank lower and lower as the number of people dwindled, but they move so slowly! I wished they would hurry so I could clean the blood soaked floor before sunset.

As I moved from the living room to the hall with another armful of blood soaked rags, one of the grimy creatures squirming on the floor reached out and grabbed at the hem of my jeans. I felt myself cringe, I wanted to pull away from his dirty hand, but when I looked down, I saw a familiar pair black eyes looking up at me.
Poe...

I dropped down beside him. His shoulder and neck were bleeding. “My God Poe, what happened?”

I brushed his hair out of his eyes, “What were you doing fighting anyway? I thought you were a scout.”

He fainted into a twitching sort of sleep. I got up, went into the kitchen for a pan of water, and clean towels. I returned and knelt down beside him, cleaning his wounds and applying pressure to stop the bleeding.

Slowly he opened his eyes and focused on my face as I hovered over him. He looked up at me with vacant eyes, “It’s bad, isn't it?”

“Liar,” he said with a weak smile. “You always were such a bad liar.”

I looked down at him and suddenly felt like crying. I looked away and added another towel to the soppy mess on his shoulder.

Poe lifted his uninjured arm so that his hand could brush my cheek.

“How can you still be so beautiful in the middle of all this mess?” Poe mumbled, “Archer Wallace is a fool...”

I looked around nervously, hoping wherever Melina was that she wasn't close enough to hear him.

I couldn't speak. His hand gripped my hair and pulled me down to him. He strained to lift his head enough for our lips to meet.

It was a soft kiss, but suddenly I felt as though I was falling. My breath caught and my heart pounded in my chest as if trying to break free from my ribs.

I willed my body not to respond. This was Poe...And it was Archer that I loved...Archer...

Poe released my hair as he fell back, slipping into unconsciousness. I looked in his handsome face, looking so much younger than his years, smeared with his own blood.

I sat with him for the next two hours, holding towels over his injuries until two men lifted him to take him to a waiting car.

I watched as his head fell back and flopped from side to side, as they moved him.
“Will he be okay?” I asked as I followed them to the door.

I reached up and touched my lips as they took him out to the waiting car.

Dana Michelle Burnett spent most of her life writing short stories and sharing them with family and friends. Over the years, her work was published in numerous commercial and literary magazines including Just Labs, Mindprints: A Literary Journal, Foliate Oak, and many more. Her short story John Lennon and the Chicken Holocaust was include in The Best of Foliate Oak 2006.

Dana Michelle's Spiritus Series introduced the idea of a ghostly romance and became a Kindle bestselling series. Her Gypsy Fairy Tale Series combined the magic of the Tuatha De Danann and the Irish Travellers and the first book in the series,Once, was included in the Faery Realms Multi-Author Box Set. With this new series, Dana Michelle dives into the trials and tribulations surrounded the paranormal gifted during a war with vampires.

She's an avid reader of anything dark and romantic. Dana Michelle lives in Southern Indiana with her dancing diva daughter and an assortment of pets.
Dana Michelle loves connecting with her readers.

You can find Dana at