To Touch The Sky by M.A. Church - Blog Tour with Author Q&A and Giveaway 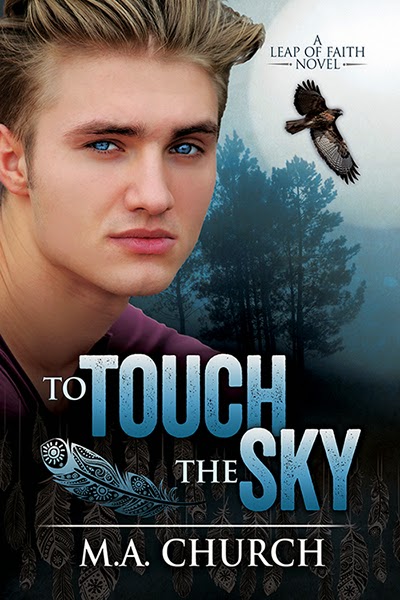 He can run, but he can’t hide…

Centuries ago, Hawk made a terrible mistake which has haunted him since. Fear of responsibility and feelings of unworthiness leads him to denying the mate Wha-tay showed him in a vision. So now Hawk runs his bar, has casual sex, and never, ever dates men with blond hair and brown eyes. But then Simon walks into his bar, and the future he’s feared is about to end up in a brawl if Hawk doesn’t do something—fast.

Simon Carter has a smart mouth and a bulldog temperament. So when Hawk runs, Simon pursues the sexy man, only to be rejected. Just as Simon decides to give up, someone—or something—visits him to change his mind… and scares him to death. Now Simon is backpedaling, and Hawk is in pursuit.

Desperate to reassure Simon, and keep him safe, Hawk is forced to reveal his secrets before he’s ready. Can Simon learn to accept things aren’t always as they seem? Is the connection between them strong enough to help Hawk overcome centuries of pain? The only way the two men will move beyond Hawk’s past is for both of them to take a leap of faith.

Two hours later he was back up, pacing the floor, beyond annoyed. Why was he doing this now? He knew who his mate was supposed to be, and he wanted no part of it. He was responsible for himself only, and he liked it that way. Too bad the spirit that shared his body didn’t agree.

Really? What about all those people at the bar who depend on you?

“It’s not the same thing, and you know it.” A quick glance out his bedroom window confirmed dawn was about to break.

Freaking A, arguing with you is like arguing with a signpost. Why don’t you go stretch your wings, old man? We’ll chill on the breeze. Shift and we’ll find a nice juicy pigeon or rabbit for breakfast. That sounds dee-lish.

Hawk rolled his neck. His totem spirit’s mentality was that of a fifteen-year-old hopped up on sugar and running on three hours of sleep. The spirit was very old, but damned if it acted its age.

Whatever, dude. Just do something, will ya?

M.A. Church is a true Southern belle who spent many years in the elementary education sector. Now she spends her days lost in fantasy worlds, arguing with hardheaded aliens on far-off planets, herding her numerous shifters, or trying to tempt her country boys away from their fishing poles. It’s a full time job, but hey, someone’s gotta do it!
When not writing, she’s exploring the latest M/M novel to hit the market, watching her beloved Steelers, or sitting glued to HGTV. That’s if she’s not on the back porch tending to the demanding wildlife around the pond in the backyard. The ducks are very outspoken. She’s married to her high school sweetheart, and they have two children.
She was a finalist in the Rainbow awards for 2013.


Q - Do you listen to music while writing?
A - *Laugh* It’s funny, but if you’d asked me that three months ago the answer would’ve been no. But I had to make a playlist for another release… and what do you know, lol? I found music! I always said before that music would distract me from writing. Knowing me, I’d end up writing the lyrics, lol. Oddly enough, I haven’t… yet. *Snort*
I have found I like stuff with a beat. Of course, I was a teen in the late 80s, so what I play is, ah, old school. It’s a combo of 80s rap, light rock, and hardcore metal. Yeah, I know, lol.

Q- Tell us something that people would be surprised to know about you.
A - I actually have a bad temper. Not too many folks know because I’m not one to rant and rave publicly. I spent too many years in a job where your every action is watched and evaluated. I tend to be very private. So when I’m pushed far enough that I lose my temper, it comes as a surprise more often than not.

Q - What is your favorite part about writing a paranormal romance?
A - Bawahahahahah! The freedom to do whatever I want!
Within reason, of course, lol.  What I mean is you have to make sense. It’s my belief your character has to have an element of realism. In a series of mine, I have mpreg. To some folks, I just step out into left field. The thing is, with this concept, you have to have an idea how to make it work. It has to be explained in such a way it *could* be done if the science was advanced enough. And whoooo boy, the world building that goes with this! Man, that can be a blast.

That’s what I mean by freedom. I love taking an idea and making it real. 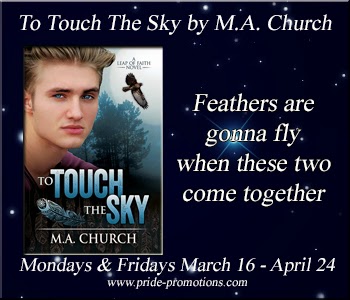 Rafflecopter Prize: E-book copy of Shadows in the Night (#1)  and To Touch the Sky (#2)