Micah Geller considers himself lucky: at 27, he has more money than he needs, a job he loves, a debut book coming out, and a brilliant career in information security before him. What he doesn’t have is a partner to share it with—a fact that’s never bothered him much.

But the romantic in him isn’t entirely dead. When a moment of weakness finds him with a contact to a high-class escort specializing in fulfilling fantasies, Micah asks for only one thing.

Angel’s shoulders were broad and strong; his hands kept a warm, steady pressure on Micah’s back, holding him so close that he could feel the movement of Angel’s chest with every breath he took. They stayed near the edge of the impromptu dance floor, swaying with the music. Micah felt safely surrounded, contained—in the familiar song, in the arms that felt as if they were made to hold him, in the magic of this evening. He turned his head, just to glance at Angel’s face, and couldn’t turn away, mesmerized by the look in his eyes. They held the world within—the world of affection, of caring. Of desire. It made something stir in Micah’s belly, a long-banished want.

Angel’s eyes flickered down to Micah’s mouth, and then back up. He bit his plump lower lip.

Around them, people were dancing, music was enveloping them in its sweet enchantment, and night air cooled Micah’s cheeks. Inside, he had suddenly only one desire. And he could have it. He’d been told to take what he wanted tonight.

Kate Fierro spent ten years translating, editing, and reviewing other people’s words before making an impulse decision to write down some of her own. She hasn’t been able to stop ever since. Kate lives in Europe and is bilingual, with more love for her adopted language than her native one.

With nearly a million words under her belt, Love Starved is Kate’s debut novel.

Q & A With Author Kate Fierro

Wicked Faerie's - What are your favorite snacks or munchies when you’re writing?

Kate Fierro - I love all kinds of nuts and dried fruit. Or grapes. Or popcorn. Basically, anything small that I can munch on between sentences. But most of the time, I try not to have snacks on hand when I write. I do, however, always have a drink with me – usually tea or water, sometimes wine.

KF - If I were to name the places I’d love to see, the list would be much too long, so let’s stick to my favorites among those I’ve visited: the fjords of Norway, Stockholm, Cappadocia, Corfu, and Egypt.

WF - Who’s your all time favorite character from either your own books or another author’s?

KF - I don’t really have an all time favorite; they tend to change with time, moods, and the books I read, but I seem to have a pattern. Most of the time, my favorites are strong, smart, independent female characters, women who are confident in who they are and what they want, free spirits who don’t conform to the norms and expectations. One example that comes to mind is Armande Voizin from Chocolat by Joanne Harris.

WF - Do you listen to music when you write? Or do you prefer TV or no noise at all?

KF - I can’t have TV in the background when I write; hearing other people talk distracts me too much from the voices of my characters. Half the time, I can’t have music on, either, if only because it is so often a source of inspiration for me. I’d be focused on a story, and then a song would come on and oops, hello new plot bunny. When I’m home alone, I write in silence. When I need to drown the sounds of TV or family, music it is.

WF - What’s up next for you regarding your books and writing?

KF - A lot, hopefully! I’m working on my next novel, which is set in Paris, and I have several more stories planned and outlined, just waiting to be put on paper. Not all of those are the same genre as Love Starved – I want to play with fantasy and young adult stories, and a few of my ideas call for short stories, a genre I find as challenging as it is rewarding. But no matter what I write, there are always LGBTQ characters in my stories. 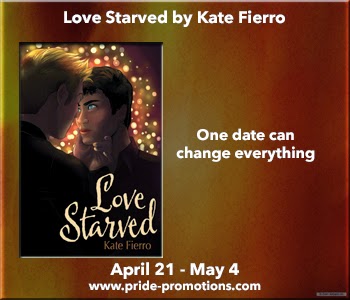