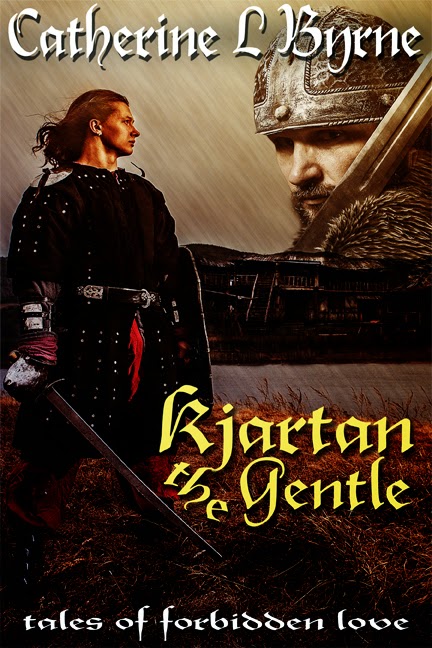 Author Name: Catherine L. Byrne
Book Name: Kjartan the Gentle
Series: Tales of Forbidden Love From the Danelaw, book 3. This is the only M/M book of the trilogy and can be read as a standalone.
Goodreads Link: https://www.goodreads.com/book/show/24796002-kjartan-the-gentle?from_search=true
Publisher: eXtasy Books
Cover Artist: Carmen Waters

In Dark Age Britain, you knew your place and if you didn’t keep to it, you faced the consequences…

Hot-blooded Kjartan, accidental hero, has settled down into married life, with a baby on the way. But when he meets handsome glass maker Lini, their unlawful relationship provokes angry and passionate reactions from their kinfolk.

They have to fight back against the prejudice of Norse culture, and find out who their real friends—and enemies—are. And this conflict leads to murder.

But who is the victim, and who the killer?

Lini then went to the kiln and put the glass blowing rod into it, collecting a blob of molten green glass. He wore gloves, but there were old burns on his arms above the glove cuff. He blew into the cloth mouthpiece of the iron rod carefully, and Kjartan gasped as the bubble expanded. Lini spun it round and held a tool to it, shaping it into a symmetrical bowl shape. When finished, he put it into the low-heated oven so it would cool down slowly and not crack. He then repeated the process a few more times.

By this time, Kjartan had completely forgotten what he was talking about and stood just gazing, mesmerised.

“It’s wholly different to fighting in a battle, yes?” Lini smiled and wiped the sweat from his brow with his arm. “Quite calming.”

Kjartan just nodded, staring at the sweat running down Lini’s tanned back.

“So, the fighting school? You got as far as saying what you were going to teach them.”

“Oh. Yes. I’ll think of something.” It was far too hot in the forge and stopped his mind from working properly.

Catherine L Byrne amused herself writing as a hobby for some years until she had her daughter, but becoming a mum made her realise she now had a purpose and time was limited, so she must get on with writing seriously.

The winter of 2009 was severe and as she and her family live in a small village, they were house bound by unusually deep snow for southern England. So she settled down in her office (i.e. the corner of her bedroom) and began her first book, which was published in 2010.

One Quick Q&A with Catherine Byrne


Wicked Faeries  – Have you ever had a character take off and go their own direction? If so, who was the worst?

Catherine Byrne - All the time. The worst is probably Kjartan from Kjartan the Gentle. I never had any idea what he was going to do. After the first two books in the series, he suddenly decided he was gay and I had to give him a boyfriend and write a story about them. And Bjarni from Bjarni the Hero was so disgusted at the shame Kjartan’s behaviour brought upon the village that he didn’t want to be in the book so I had to send him off on an assignment for the whole story. He only came back at the end to say ‘what’s been happening while I’ve been away?’ 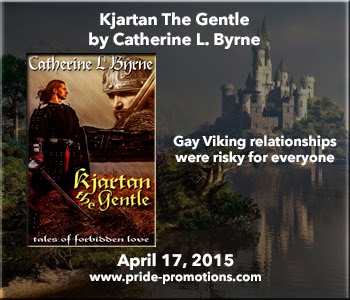