Powerful CEO, Garrett Emerson’s, life and corporation are built on a foundation of risk taking and top secret priorities. He works hard, but plays even harder. When tragedy strikes, the charismatic and sexy billionaire takes the gamble of his life by bringing a beautiful consultant into his inner sanctum, exposing her to his exclusive society of extreme athletes who are adventurous both in business and pleasure. Inexplicably drawn to the intriguing woman, Garrett teaches her to face her fears, bringing them both to new levels of ecstasy.

Selby Reynolds, a high profile technology specialist, reluctantly accepts an engagement at Emerson Industries. Discovering secrets and uncovering clues to a murder, she’s swept into Garrett's dangerous but seductive life of luxury. Captivated by the world renowned capitalist and adventurer, she’s convinced he could crush her heart. As he pushes her sexual limits and their erotic play intensifies, Selby finds it impossible to resist the one man who turns her darkest fantasies into a reality. When Selby’s life is threatened by a killer, carnal lessons of trust are put to the test, forcing them to choose who is friend and who is foe. Can Selby give her heart to a man who revels in the excitement of flirting with death? Will they prevail against an enemy who threatens to tear apart Garrett’s world, including the fragile connection with the woman he seeks to claim as his own? 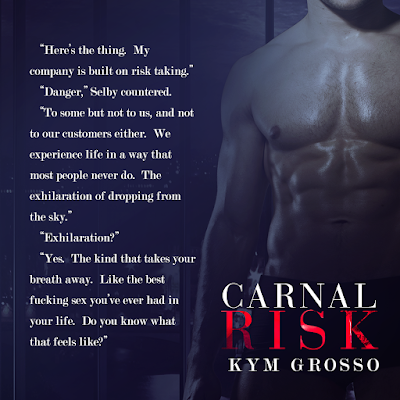 Selby stared at Garrett, considering her next move.  She was incredibly turned on by him, but fear held her back.

“Answer me,” he told her. His eyes smiled but his intense stare warned her to obey.

Selby could hardly believe that after all these years of avoiding heights, she was agreeing to what he asked.  It terrified her that he used his words to push her, to arouse her.  She wanted to deny him, to deny herself the fantasies she’d never allowed herself to have with another man.  But even as she grew wet from his suggestion, she couldn’t bring herself to admit to him that she wanted it.

“Very well.  Don’t worry. I’ll never let anything happen to you,” he promised. He reached for her hand, and slowly walked with her toward the railing.

It wasn’t lost on Selby that Garrett shielded her view.  She came up behind him, clutching his shirt with her free hand and trembled in fear as he placed her palm onto the iron bar.

“Take a deep breath.  You’re doing fine, sweetheart.”  He turned to face her, and she forced her fingers to open, releasing the fabric.  “That’s it.  Put your other hand here.”

As he settled her grip around the cold metal, Selby closed her eyes.  She felt the warmth of his body behind her, the hardness of the rail brushing against her stomach.  Blinking her eyes open, she continued to shake as the pool came into view.

A memory of being rushed to hospital flashed in her mind.  It wasn’t the first time, it wouldn’t be the last.  It had been a gorgeous day. She’d gone on a hike, traveled several hundred feet upward before she’d realized heights were a trigger. The sight of Los Angeles had been spectacular until she’d gone to walk back down.  I’ll fall.  I’m up so high. I can’t move.  Paralyzed, she’d cowered to the ground.  The pain in her chest wouldn’t cease.  She knew it was another panic attack, but was at a loss as to how to control it.  Garrett’s soothing voice brought her back into the moment.

“I see you.  Maybe better than you see yourself.  You’re beautiful.” His hands never left her body as they grazed over her arms onto her shoulders, then trailed down her back until they rested on the sides of her thighs.

“But you wanted to do this for me, didn’t you?”

“Are you trying to distract me?”

“Maybe, but the thing is, I want to get to know you.  I want more than just working with you.”

“But you hardly talked to me in the office this week.  Ever since the beach…” He hadn’t looked at her with the slightest interest.

“He’s so mad at me.”  Selby tried to turn her head to face him, but his hands held her thighs still.

“Never.” His lips brushed her hair.  “But I will push your limits of what you think you’re capable of doing.  You’re brilliant.  Even though you hold onto these fears so tightly, I know you can embrace what we do.”

“I don’t know if I can.  Lars says I don’t belong here.  That I’ll never be right for you.  But when I’m around you…” she whispered, “you make me feel…alive.”

“I want to fuck you right here.  Will you let me do that?”

“What?  Garrett…” Selby laughed.  Jesus almighty. She couldn’t believe that she was three stories up, overlooking the pool and that her first instinct was to say ‘yes’ to public sex.  Before she had a chance to answer further, his hands slipped underneath her dress.  She gasped as his palms glided up her belly and cupped her bare breasts.

“Have you fantasized about my hands on you?”

“You have, haven’t you?  Tell me.” His hand trailed down her abdomen, slipping into her panties.

“Please…I can’t…” Selby moaned as Garrett’s fingers pressed through her wet lips.  As he plunged a thick digit into her core, she cried out.  She’d yearned to have him touch her, had imagined it a million different ways, but never had she thought he’d take her at the party.

“I was right…look at how wet you are, my brave girl.  You know what I think, Selby?” His lips moved to her neck.

“Oh God,” she cried as he pumped another finger inside her.

“I think you crave this…like a seedling waiting for the sun, you’re going to bloom.”

Selby clutched the rail.  His warm breath teased her ear and she shook her head, wishing she could deny his words.  But as his thumb flicked at her clit, any ability to lie failed her.

“I want you so much,” she breathed.

“We shouldn’t,” she panted.

“Someone could see us.”

“I…ah…” Selby’s orgasm built and her eyes darted to the deserted deck.  Although they were concealed in the shadows, music blared in the distance.

“Or would you like someone to watch?  Do you want them to see you come?”

“No, I just want…”  Selby attempted to stop her pussy from clamping down on his fingers at the mention of exhibitionism, but her effort was thwarted as he rocked his erection against her ass.

“Fuck, you surprise me…it excites you.  Don’t worry, sweetheart.” He kissed her ear. “We’ve got plenty of time for that.  But right now, I just want to make you feel good…any fear you felt is gone right now, isn’t it?”

Selby’s head lolled over as he pinched at her clitoris.  He added a third finger, and she cried his name out loud.  She was helpless to stop it; her climax consumed her.  Her hands gripped at the bar as the violent spasms racked her body. Without warning, he withdrew his fingers and she whined.  The crinkling sound of a condom was all she heard before he spread her legs with his knee.

“Open for me,” he whispered into her ear.

“Garrett,” was all she could manage as he entered her from behind.

Selby’s arousal spiked as he filled her to the hilt. The sweet pain of her channel stretching brought her into focus.  She wanted him more than the air she breathed. Selby had never done anything like this before, but the more he tested her, the more she embraced the rush he gave. 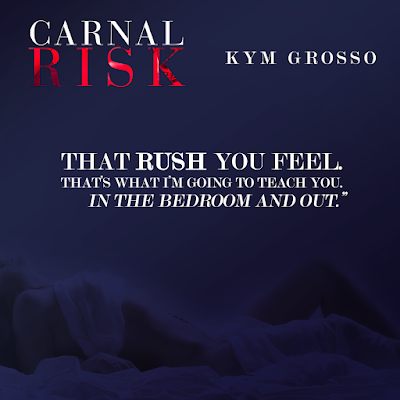 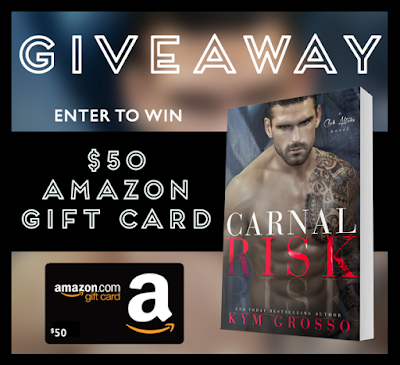