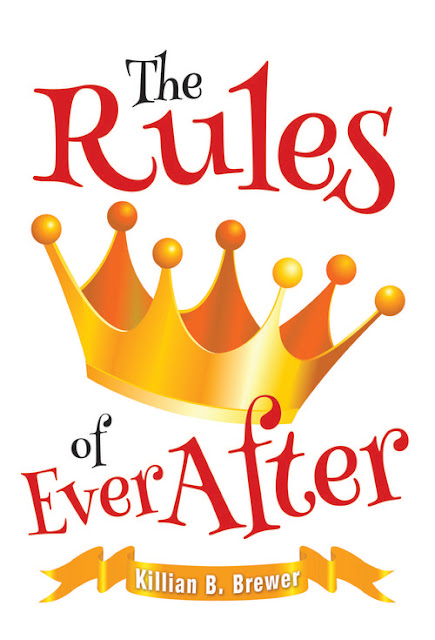 The rules of royal life have governed the kingdoms of Clarameer for thousands of years, but Prince Phillip and Prince Daniel know that these rules don't provide for the happily ever after they seek.

A fateful, sleepless night brings the two young men together and sends them on a quest out into the kingdoms. On their travels, they encounter meddlesome fairies, an ambitious stepmother, disgruntled princesses and vengeful kings as they learn about life, love, friendship and family.  Most of all, the two young men must learn how to write their own rules of ever after.

“Phillip, don’t believe all those stories your scribe told you. Magic is not defeated by waiting for someone to come rescue you from it. You have to fight it.” Daniel paused and took a breath before reaching out to take Phillip’s hand again. “I sat around for two years waiting for someone to come along and fix my problems. No one came, and nothing changed. Then I realized that maybe the person I was waiting for was me. So I went out to find my own answers.”

“I’m not you. I don’t even know where to begin.” Phillip sat back on the edge of the bed.

“You begin the way everyone does,” Daniel explained, “one foot in front of the other.”

“I’ve barely been out of this castle. I don’t know what’s out there.”

“Well, you’re in luck. You know someone who does.”

“What? Who?” Phillip cocked his head and stared at Daniel in confusion.

“Me!” Daniel winked and pointed to his chest. “I know what’s out there. I’ve been wandering all over the kingdoms for months now. I’ve studied the maps and the histories. I know how to fight and how to survive.” Daniel stood up. “I’ll come with you,” he continued. “I’ll help you find her, and we’ll bring her down together. We will fix this.”

Daniel could almost see the wheels turn in Phillip’s head as he considered Daniel’s offer. He looked over at his father, then back down at his feet before glancing up to Daniel with a look of tentative hope. “Why would you do that?”

Daniel pondered the question for a moment, unsure of the answer himself. The pain in Phillip’s face touched Daniel’s heart and made him want to bring back the mischievous, laughing man he had met just two nights before. This was not his problem, and he had his own concerns to deal with, but looking at Phillip’s terrified face, he knew he wanted to help. He knew he had to.

“I’m not being completely selfless. I’m still going to be looking for my own answers. But I can help you look, too.” Daniel held his hand out to Phillip. “Come with me. Let’s go get you some food and make a plan.”

“You’re just saying this to get me to eat.”

“No. As I said, I feel responsible. If I hadn’t gotten in that bed—”

“But you did.” Phillip mumbled before turning to look at Daniel with his eyes wide. “And you passed the test. I thought for sure you were the answer—”

“The test? I still don’t understand about this test.”

“Yes. You were the first to spend the night in the bed and be kept awake by the pea under the mattresses. Okay, maybe some of the others could have passed if I hadn’t—”

“Phillip? You think a pea kept me awake?” Daniel stepped back and knitted his brows; he had clearly missed some element of that awful night’s events. Though he was glad to see some sign of activity from Phillip, Daniel was thoroughly confused. “Why was there a pea under—”

“Yes. You passed the test. Maybe it is a sign!” Phillip stood and turned to Daniel; excitement spread across his face. “Maybe you are here to help me.”

Killian B. Brewer grew up in a family where the best way to be heard was to tell a good story, therefore he developed an early love of storytelling, puns and wordplay.  He began writing poetry and short fiction at 15 and continued in college where he earned a BA in English. He does not use this degree in his job in the banking industry.

He currently lives in Georgia with his partner of ten years and their dog. Growing up in the South gave him a funny accent and a love of grits. The Rules of Ever After is his first novel.

Q & A with author Killian B. Brewer

Today I’m very lucky to be interviewing Killian B. Brewer author of The Rules of Ever After.
Hi Killian, thank you for agreeing to this interview. Tell us a little about yourself, your background, and your current book.

Thanks for inviting me! I’m Killian Brewer, though most people just call me “Brew.” I grew up in a tiny town in Georgia in a house where we were encouraged to tell stories to entertain each other. I began writing seriously in college and I first started the short story that is now The Rules of Ever After in a writing workshop I joined there.
The Rules is a twist on a fairy tale where Prince Charming breaks the rules and falls for another Prince Charming. The book follows the two men on their adventures as they attempt to find a way to have a happily ever after of their own that may not follow the normal rules of fairy tales or royal life. The Rules also looks at what happens to the princesses they were expected to marry when they begin exploring their options outside of the rules too.

Wicked Faerie's  - When did you write your first story/book? How old were you?

Killian B Brewer - I wrote a lot of (terrible) poetry as a young teen, but I really started taking writing seriously in college. I wrote some poetry then but mostly I wrote short stories. When I discovered I enjoyed creating worlds and people to live in them, I took as many writing classes as I could. I won a couple of prizes for some of my poetry. The Rules is my first novel length work.

WF -   Are you a plotter or pantser?
KBB - I am definitely a plotter. I keep my mind open for any unexpected plot elements that may present themselves while I am writing, but I find it works best for me to know where I am starting and where I want to end. The outline for this book was almost 5ooo words alone. When you are creating a fantasy world for characters to live in, it definitely helps to have the “rules” of your world established at the beginning so you don’t write yourself into a corner where you have to break your own rules or start over.

WF -    What do you think makes your book stand out from the crowd?

KBB - I really wanted this book to provide LGBTQ readers a chance to see themselves in the kind of fairy tales we grew up reading but never being a part of.  I am a firm believer that everyone deserves a happy ending and I wanted the book to make the reader take a step away and look at what they can do to find their own happy ending and what “unfair rules” might be standing in their way.

KBB - Saturdays are my writing day. I am a part time writer, so the weekdays are pretty much used up by the day job. I do like to use weeknights to edit things I write on Saturday. I leave Sunday open because it is the only day my partner and I are both off work. That is our day to enjoy our world together, but Saturday is the day I live in whatever world I am writing. I like to get up early in the morning and write. Then I will use the afternoon for real life tasks  followed by more writing.

WF -   What do you like to read in your free time?

KBB - My reading tastes are really eclectic. I love to read memoir and essays, like David Sedaris, Sarah Vowell or Carrie Fisher. I also enjoy southern authors like Carson McCullers, Flannery O’Connor and William Faulkner. Lately, I have been trying to read more LGBTQ authors David Leavitt, David Leavithan, Stephen Fry. Also, I’ve been discovering gay authors from the past like Christopher Ishwerwood, Edmund White, Noel Coward, and even Oscar Wilde. I think it is important to have an understanding of where we have been as LGBTQ people and by knowing our history,we can appreciate our present and strive for a better future. 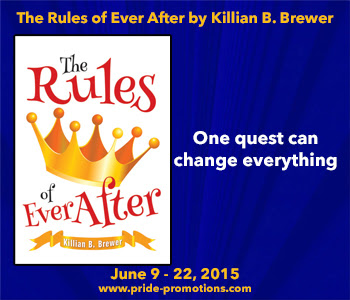 Rafflecopter Prize: $25 Interlude Press Gift Card. 5 e-copies of ‘The Rules of Ever After’ by Killian B. Brewer