My Cowboy Promises by Z.A. Maxfield - Blog Tour with Review and Giveaway 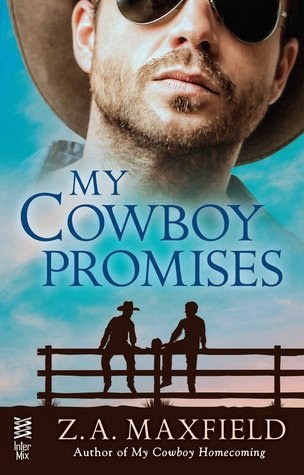 My Cowboy Promises
(The Cowboys Series, Book #4)
By Z.A. Maxfield

To become the man he’s meant to be, one cowboy will have to be the man he never wanted anyone to know he was…

Ryder Dent is a true-blue cowboy. A devoted son, husband and father, but one who is living a costly lie. When they were both young, Ryder and his closest female friend Andy thought they’d found the perfect solution to both their problems—she was single and pregnant, and he was secretly gay—so they got married and raised Jonas together.

When Ryder gets hurt at a party, his son’s new pediatrician comes to the rescue. The connection between Ryder and Dr. Declan Winters is sudden, powerful, and undeniable. Ryder loves Andy and the family they’ve created together—but they both need more. Can they pursue their hearts’ desire without destroying the life they’ve built and losing the son they love?


The hottest guy I ever saw was playing “Pop Goes the Weasel” on the piano while fifteen cagey preschoolers circled fourteen chairs. My father-in-law’s annual Fourth of July shindig—the biggest event of the year—was a family picnic. We’d set aside a play area for the littlest kids and I’d volunteered to supervise, but the piano man blindsided me and I nearly missed an outrageous hair- pulling incident.
Like a too bright pair of headlights on a moonless night, he was all I could see.
Mayor Calder Hamilton—a cartoon bear of a man with a white handlebar mustache—snuck up on me with one of those painful backslapping man hugs.
“Ryder Dent, you son of a bitch. Which one is your boy?”
“That’s Jonas.” I pointed out my son. “Blue plaid shirt, cowboy hat. Crass determination to win?”
“I know that look, I see it every day when I look in the mirror. But how can that be him? Last time I saw him he was half that size.”
Why do people always say that? Is it some rite of passage? Am I going to be surprised kids grow someday too? “We had to buy him a new pair of cowboy boots just last week.”
“He’s a fine-looking boy. Where’s Andrea?”
“She doesn’t come to these things to hang around with me.” I glanced toward the windows. “You’ll find her wherever there’s dancing.”
“She leaves you in charge of Jonas?”
“Gosh, yeah. Andi’s the social one. She likes to kick up her heels and I don’t mind if she wants to have some fun.”
“So have you met our new doctor yet? Isn’t he something? I have never seen anyone play piano like that.”
“That’s Doctor Winters?” The doc had started playing “Pop Goes the Weasel” like a Russian folk dance, all the while yelling Hai! Hai,! Hai! Hai! The music stopped and the chaos started. Jonas ended up on another chair.
“Go, Team Jonas!” I pumped my fist like a goofball.
“Yeah. Go, boy, go!” Hamilton was already tipsy enough to be unaware he was shouting right in my ear. It didn’t matter; I was going deaf from all the kids squealing anyway. “I’d like to ask your help with something.”
“Sure thing, Mayor. Shoot.”
“I need you and your family in a campaign ad”
“My family?” Good grief. Bitterroot’s founding fathers would shit in their graves at such an idea. “I don’t think we’d make a very good ad.”
“C’mon.” He punched my arm. “You and Andrea are both attractive. Jonas is a cute kid. You had to make some tough choices in the beginning, but look where you are now.”
“Uh . . . I don’t think—”
“I need a family exactly like yours to represent my campaign to the twenty-somethings. I need them to believe they’re important to me.”
Me and Andi? My stomach did a full 360, front to back, as if I was on a Six Flags ride. Mayor Hamilton wanted some picture-frame perfect family, and we were not it. Plus, we hadn’t exactly voted for him. “I’ll ask Andi about it, but—”
“Andrea’s dad just told me he’s backing me all the way again this next election.”
“Is he?” That figures. Her dad likes politicians to owe him.
“So you just tell her you’re doing it, okay?”
“Sure, I’ll mention it, but—”
Hamilton’s wife, Sally, came up to collect him. “C’mon Cowboy. There’s someone I want you to meet.”
She grabbed his hand and, after a good-natured tug-of-war, they left together. I breathed again. Andi’s dad ran one of the most successful ranches in the area. If he wanted to see my family on a billboard, I’d have to figure a way to get out of it or learn to say “cheese.”
It was pretty hard to say no to Sterling Chandler. I’m not sure he understood the word.
Shit.
The new doc managed to make “Pop Goes the Weasel” sound like a funeral dirge and the children all lurched around like little zombies. Then he turned it into a raucous honkytonk song.
Who was this guy?
Jonas got eliminated fourth from last but he wasn’t crushed by the loss. His attention shifted right away to the buffet, where the cater-waiters had installed several trays of Texas-sized cookies, all colored with red, white, and blue sugar crystals in honor of the holiday.
Musical Chairs, the Survivor edition, came down to two particularly crafty-looking femme fatales. One wore a jeans skirt, cowboy boots, and a pretty white blouse, and the other had on a daisy-printed sundress with lacy socks and jelly shoes. Lacy socks girl won by body-checking white blouse girl out of the way and pouncing on the last chair. She gripped the seat so tight with both hands no one could get her off it.
The new doc consoled the runner-up with a box of big-block Legos and gave the winner a play set with pink and purple Ponies but it seemed she thought she was getting the chair as her prize. Eventually her mom pried her up and they all wandered off to join the party outside.
Doc Winters was left to tidy up. I figured I ought to help, being family and all. Plus, it might get me out of small talk outside.
But the doc was the best looking man I had ever seen up close. I was bound to mess up and say something super stupid, and Andi was going to hear about it, and then she was going to tease me for the rest of my life, because she was just waiting for me to lose my shit over some guy.
And Doc Winters, M.D., The Yankee Doodler?
He could be the guy.

3.75 out of 5 stars
My Cowboy Promises is the 4th book in The Cowboy series. This is the first book that I've read from this author and while it was part of the series I didn't seem to lose anything in regards to storyline. It reads as a standalone romance.

I'll admit I was a bit hesitant over the storyline for this book as I'm generally not a fan of gay characters playing it straight and denying who they are to everyone. This was more than that because it was a story of creating the family we want and need to have around us. In Ryder and Andy's case both came from families that weren't able to show affection and love and as friends they gravitated to each other to fill that need.


Ryder's taken on so much at a young age that he's not really had a chance to live his life. His friends have all mostly moved on to their own thing while he'd rearranged his life to provide for Jonas and Andy. I loved Ryder interacting with Jonas, it was so sweet and adorable that I almost resented when Andy would show up on scene. Then Ryder meets the new doc in town, Declan and so many things seem to change for him. In some ways Ryder panics over how he feels because he's shoved that part of himself into the furthest available spot so he won't want those feelings. He can't help it though with Declan, because he's just that perfect person for him.


For me, I enjoyed the storyline but I did have some issues with how things played out and that the ending wasn't really an HEA or even an HFN. And this kind of storyline lends itself to the possibility of not providing a reader with an HEA or HFN at the end of the book. I'm not sure if the author has plans to write an additional story for Declan and Ryder or if we'll see more of them over the other books in the series. So in that it left me feeling that the story was incomplete enough to get a little frustrated at the end.


Now that being said, I encourage each reader to make their own decision, create their own opinion on if the story works for them or not. As readers we are all very different and what works for one reader may or may not work for the next. This was a good story, with good pacing and character development. It is a very worthwhile read just to meet these adorable, lovable characters that the author has created.


I will definitely give this author another try, and will even search out some backlist titles to check out as well.

Z. A. Maxfield started writing in 2007 on a dare from her children and never looked back.  Pathologically disorganized, and perennially optimistic, she writes as much as she can, reads as much as she dares, and enjoys her time with family and friends. Three things reverberate throughout all her stories: Unconditional love, redemption, and the belief that miracles happen when we least expect them.

If anyone asks her how a wife and mother of four can find time for a writing career, she’ll answer, “It’s amazing what you can accomplish if you give up housework.”

You can find ZA Maxfield at