Devil's Food At Dusk by M.J. O'Shea and Anna Martin - Book Tour with Review and Giveaway 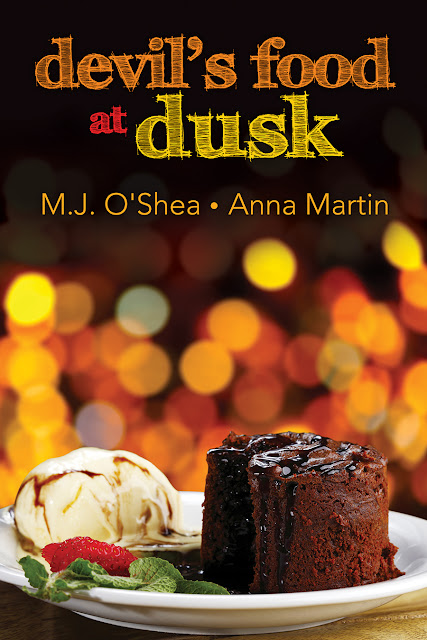 
BLURB: Joe Fitzgerald hates New Orleans, but he’s stuck there until he convinces one stubborn local family to sell Lumière, the crumbling French Quarter restaurant they’ve owned for generations. The place is a wreck, and it’s hemorrhaging money. Joe figures he's their best chance for survival.

Remy Babineaux despises Pineapple Joe’s and everything the chain stands for. He refuses to let Lumière become some tacky corporate tourist trap. Theme drinks and plastic beads in his restaurant? Yeah, right. Over his dead, rotting corpse. The last thing Remy wants is a meeting with the restaurant chain’s representative, but his father agreed to at least listen to the proposal. There’s nothing Remy can do about it.

Remy figures an anonymous hookup is exactly what he needs to decompress. When he ends up across the table from his fling the next morning, real sparks fly. Joe refuses to give up his prime location; Remy refuses to give up his legacy. It’s war, and they’re both determined to win at any cost. Neither of them counted on falling in love.

Dawn always seemed to come a little later in the French Quarter, molasses-sweet and slow, still soft but with hints of the sticky heat to come. It spread, languorous, over the weathered painted walls and wrought-iron railings, crooked cobbly streets, and leaded glass windows that had seen hundreds of years of people passing by. Morning was quiet. Peaceful. Mellow.
Remy Babineaux had lived in the city all his life, in the same house on the same street covered by the same winding, purple-flowered bougainvillea vines and creeping ivy, but still, sometimes, in the pink blush of an unhurried morning, he was struck with just how much he loved it. How much he never wanted to live anywhere else.

He pulled his tired body out of bed in the barely there brush of light and stretched. He hadn’t slept much the night before—five hours at most—and he felt every one of his very busy, thirty years in his creaky muscles and sore back. It had been easier to get up with the morning sun when he was nineteen. To a point. Truthfully, Remy hadn’t ever been a morning person. He’d always preferred sleeping in to experiencing the unusual stillness that came in the Babineaux household hours before brothers and sisters, mother and father, and one rather eccentric grandmother started shouting and laughing and singing—and usually all at once. But he had to admit the morning was beautiful. And even if it wasn’t, he had fish to buy.

Next time I’m making Andre go so I can sleep in.

Remy knew that wasn’t true. He trusted his little brother with his life, but with the fish selection? Never. Nobody but him had had the coveted job of fish selection since he was a teenager. He pulled on a threadbare white henley and a pair of khakis that he didn’t mind getting fish juice on. Then Remy tugged his wavy hair into a thick, high bun, slipped into a pair of shoes, and was out the door. Time to greet the day with rack after rack of amazing, delicious, smelly fish.

Thursdays were usually the best day at the fish market. It was one of those things that had no logical explanation but a long history of somehow working out that way. The market was open three days a week, and he usually liked to make it to two of them, but Thursdays were for some unknown reason when the magic seemed to happen. He liked to get there early for the pick of the catfish, local trout, and sweet, tender gulf shrimp. Wandering through the fragrant stalls, which should be unpleasant but somehow smelled of home and happiness, was something of a Zen experience for him. One of the highlights of his week.

The market was crowded and loud, even in the bare light of early morning. Chefs and restaurant owners haggled with fishermen who’d become their friends over the years, laughed at well-worn jokes, argued the same arguments like a dance that had been practiced over time and perfected. The fish market was a tradition, and his city was nothing if not steeped in traditions.

Remy spent a few minutes soaking it all in, checking out what was new and interesting and delicious before he got down to business. It was important, he thought, to experience things, and not just go through his day completing tasks. His food was better if his feelings for the moment seeped into the dish. Made life better too if you asked him. His little sister, Grace, gave him shit for his “stop to smell the roses” way of looking at things. She was only fourteen, in a race to grow up and become something. Someday she’d understand that the becoming part was just as important as the getting there.

He stopped at a stand and stared down at piles of glossy pearly gray shrimp, barely touched with hints of blush pink. He’d steam them perhaps, on a base of pasta with clams and roasted vegetables, a little garlic, some cumin, cayenne, local butter, and a ton of French thyme. Remy could nearly taste the sauce exploding in his mouth—butter broth and seasonings and sweet, firm shrimp. Yes.

“Hmm? Oh yes. Sure thing, Renee.” His favorite shrimp dealer knew him well. He could easily go through that much on a weeknight. Four times that on a busy weekend. Remy signed off on the purchase order. The shrimp would be delivered to his cafe, Lumiere, in a few hours with the rest of his purchases, just in time for him to start cooking.

Remy worked his way through the crawfish and catfish, the mussels and clams, smelling and sampling, weighing and ordering. It was his ritual. He never rushed it.

When Remy was nearly ready to call it a morning and head back home, his phone buzzed with a text from Andre, his little brother and one very pushy sous chef.


Remy made a face. The halibut at the fish market was good, but it was shipped all the way from the north Pacific on ice. He’d far rather use local catches to make his spin on traditional dishes, but sometimes Andre got his way. The halibut and chips was one of those times. Andre had tried it, fallen in love, and decided it should be a regular menu item at Lumiere, after a lot of protesting from Remy. It had become popular with the customers, much to Remy’s annoyance. He was even more annoyed by the fact that he liked it himself—especially with Andre’s signature tangy tartar sauce. Most of the time he pretended he didn’t, but Andre knew better and liked to flip him all sorts of shit for it.


I’m getting your damn halibut. Go back to bed.


All he got in return was a winky face and a string of fish emojis. Remy chuckled. Child.

4.5 out of 5 stars
Devil's Food at Dusk is the third book in the Just Desserts series but can be read as a standalone. I have to say I think this is my favorite book out of the series. The setting is New Orleans after all and the way the authors wrote the book you feel like you're walking through the Quarter and the Markets with Remy in the morning. You're feeling that heavy humid heat in the summer, the smell of the fish markets, and the lovely but strong scent of the local flora blooming. Remy is a force to be reckoned with both in the kitchen and out. He's the eldest son in a loud, boisterous, and very close-knit Cajun family. Their restaurant Lumiere is Remy's baby since he took over from their father after he retired. While he's made strides in bringing people back to enjoy the food, the building and interior is in need of TLC and a large influx of money. Joe comes off as a bit of an uptight asshole to start because all he's worried about is acquiring the Babineaux's family restaurant. He's all about getting their newest Pineapple Joe's location up before Mardi Gras comes around instead of seeing how much Lumiere means to this family. Once he and Remy meet by accident and have a one night stand all bets are off because these two together are HOT!!I can't say I liked Joe to start but the way the authors progressed the story his edges softened and you could see the person he was meant to be. Being around Remy and the Babineauxs and discovering the wonder that is New Orleans causes a huge shift in his perspective. Joe and Remy may start off at a casual fling but as they go they end up falling for each other. The first time that Remy realizes he just wants to sleep curled up with Joe is one of those sweet, fuzzy, I love this story moments. That doesn't mean they don't have a lot to overcome, because in the end they do but by then you're cheering them on to the end. I thoroughly enjoyed this story, after all it's set in one of my favorite cities. Of course Remy with his sexy man bun, his smooshiness with little Stella, and his passion for cooking just sucked me into the story. And as much as this is a romance, it's also a story about family and the bonds that allow us to be who we are, and to take our dreams and fly with them. So I really can't say enough that you need to read this book.. but You NEED to read this book!! 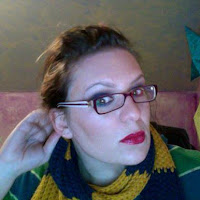 I’m Mj O’Shea :) I grew up, and still live, in sunny Washington state and while I love to visit other places, I can’t imagine calling anywhere else home.


I spent my childhood writing stories. Sometime in my early teens, the stories turned to romance. Most of those were about me, my friends, and our favorite movie and pop stars. Hopefully, I’ve come a long way since then.


When I’m not writing, I love to play the piano, dance, cook, paint pictures, and of course read! I like sparkly girly girl things, own at least twenty different colored headbands, and I have two little dogs who sit with me when I write. Sometimes they comes up with ideas for me too…when they’re not busy napping.


Sign up for MJ O'Shea's newsletter for updates, exclusive contests, excerpts and more...

Anna Martin is from a picturesque seaside village in the south west of England. After spending most of her childhood making up stories, she studied English Literature at university before attempting to turn her hand as a professional writer.


Apart from being physically dependent on her laptop, she is enthusiastic about writing and producing local grassroots theatre (especially at the Edinburgh Fringe Festival, where she can be found every summer), travelling, learning to play the ukulele, and Ben & Jerry’s New York Super Fudge Chunk.


Although her most recent work is in the LGBT romance genre, in the past Anna has worked on a variety of different projects including short stories, drabbles, flash fiction, fan fiction, plays for both children and adults, and poetry. She has written novels in the Teen or Young Adult genre, Romance and Fantasy novels.


Anna is, by her own admission, almost unhealthily obsessed with books. The library she has amassed is both large and diverse; "My favourite books," she says, "are 'The Moonstone' by Wilkie Collins, 'To Kill a Mockingbird' by Harper Lee and 'Oryx and Crake' by Margaret Atwood." She also owns multiple copies of Michael Crichton's Jurassic Park books and re-reads the Harry Potter novels with almost startling regularity.

2 Runners up win: An e-copy from either MJ O’Shea’s or Anna Martin’s Backlist.

Fangirl Moments and My Two Cents
My Fiction Nook


June 26:
Because Two Men Are Better Than One