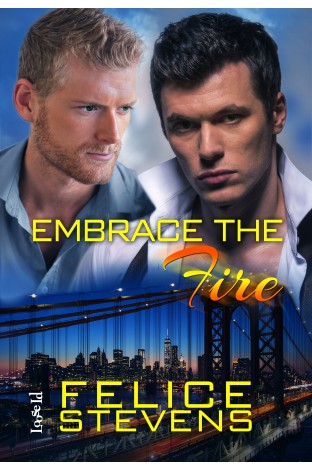 Embrace the Fire
Through Hell and Back # 3
By: Felice Stevens
Releasing May 26th, 2015
Loose ID

Brandon Gilbert has spent years in hiding, but finally he’s accomplished his dream of working as a public school teacher. When offered the chance to help bullied children, there was no way he could say no. Not to mention that meeting Dr. Tash Weber, the psychiatrist who helps them, a sad yet sexy older man, ignited a spark inside Brandon he’d never had before.

Though five years have passed since the death of his lover, Dr. Sebastian "Tash" Weber has no interest in relationships or love. But young, enigmatic Brandon awakens his heart and his desire. Despite Tash’s best efforts to push him away, Brandon unlocks the passion for life Tash thought he’d lost forever.

Falling in love wasn’t part of the plan for either Brandon or Tash, but neither family disapproval nor self-doubts can stop them from embracing the fire that burns between them. And when Brandon returns home to fight for a future he never imagined possible, he and Tash discover that the one thing worth fighting for has been with them all along.

“Maybe we should get started? I’m, ah, kind of interested in seeing what you want me to do.” Beneath lowered lashes he shot a glance at Tash, who, thank God, had turned his attention to talk to the other men in the room.

Though he couldn’t remember their names, Brandon recognized the husky blond-haired man, hovering protectively next to a dark-haired young woman, from the picture hanging outside on the wall.

“That’s Mike, Dr. Levin, the dentist. He and Drew’s sister, Rachel, are dating,” Gage murmured in between sips of coffee. “She’s got a PhD in child psychology and set up the suicide prevention hotline here at the clinic. They really thought of everything here.”

Once again, regret slammed into Brandon. What dreams could Ash, Luke, and he have accomplished if someone had cared about them? Ash might not have run away, and Luke might’ve had someone to talk to instead of becoming so sad and withdrawn.

Brandon blinked and found Gage’s sympathetic gaze trained on him. He swallowed hard and averted his eyes. “Nowhere.”

Gage shot him a sharp look but returned to sipping his coffee. As Drew approached, Brandon braced himself for the inevitable onslaught of getting-to-know-you questions. It didn’t matter as he had his whole pretend history well rehearsed.

“So, Randy, we’ve already heard from Gage before today. What do you think we need to do, to reach and help as many kids as possible?” Drew sat in the chair next to him.

Brandon instantly sensed Drew was a person who rarely passed judgment on people; he was the person you wanted to come home and tell all your problems to.

“I think you need to make sure the kids know first this is a place of trust and security. Also if they come here to talk, or we talk to them anywhere, we’re there to help them work out their own solutions safely.”

Rachel’s friendly smile encouraged Brandon and increased his confidence. “The most important thing to teach these kids is that they have a chance to break free and be what they want to be.”

Drew rubbed his chin, and his eyes clouded. “One thing from the beginning I have to make clear. If we hear of any abuse, we go straight to the police. If there’s any bullying, the school and the parents have to know.” The smile he wore so easily faded, replaced by an almost trembling frown. “We lost someone very dear to all of us because we held back, and I made the mistake of trying to handle the problem on my own.”

Rachel whispered in Mike’s ear, and he came over to place a hand on Drew’s shoulder. Drew smiled tremulously at him but continued. “The consequences are too enormous and dangerous if we don’t bring in the authorities when we know a person is at risk.”

The police? Shit. He couldn’t be a part of this. For years Brandon had evaded them, deliberately taking every precaution to keep as far away from them as possible. Now with this project, he’d be putting himself practically in their pockets. Though the mission sounded amazing, he knew he’d have to decline. He couldn’t afford the risk.

“Um, I’m not sure if I’m the right person for this.” Brandon’s fingers shook as he reached for his jacket. The room fell silent as he fumbled and stuttered over his words. “I mean, I’m so new; you really need a person who’s more experienced.”

He stood and grabbed his backpack. “Uh, I have to go, but I’ll let you know if I can do it. Thanks.”

“Wait, Randy, please.” Tash put himself in between Brandon and the door, but Brandon couldn’t let the disappointment and confusion in Tash’s handsome face dissuade him from leaving. He circled Tash and wrenched open the door.

“I’m sorry. I gotta go.” Cheeks burning, Brandon put his head down and raced through the hallway toward the front of the building. He’d just reached the door, when it burst open, and a tall, dark-haired man stood facing the street, shaking out his wet umbrella.

“Excuse me,” muttered Brandon, brushing by him, not waiting for a response. He plunged headlong into the foggy drizzle that had begun again, uncaring if he got wet. His long strides ate up the block as he pushed himself farther and farther away from the clinic. It hurt, walking out so abruptly, but once he got home, he’d call Gage and make up some excuse.

At the intersection he spotted a cab with its light on, and even though he could barely afford the fare for his monthly subway pass, he hailed it, asking it to drop him off at the nearest subway station in Carroll Gardens. He’d find a way to get home to Flatbush somehow.

The farther away he got from the clinic, the better, yet as he sat back in the cab, he couldn’t help recalling the disappointment in Tash’s face. But Brandon knew if he stayed he’d do more than disappoint everyone, and that wasn’t a chance he was willing or able to take.

So the book stuff first, Embrace The Fire is the third book in this series and they do need to be read in order. That being said we can move onto the important things...

Such as the fantastic awesomeness that was Tash and Brandon. I could so utterly fangirl over this book simply because of Tash. I fell in book love with Tash in After The Fire almost the moment he appeared on the page. The moment I finished After The Fire, I 'ran' over to the author's Facebook page and embarrassed the hell out of myself by all but begging to know if Tash was getting his own story. She confirmed that yes he was, but wouldn't say when it would be out and only that it was with a younger man. I should have known then it would be Brandon.


What can I say but Tash and Brandon are perfect for each other, but that's all I'll say because this book is pretty spoiler filled. I can say that this is a couple focused book with a extended focus on family and building trust. We all know how hard that trust thing can be even for a normal couple with no issues.


Embrace the Fire ended up being an excellent wrap up to this series. It brought everything full circle and even showed bits of the future at the end of the book. I don't know about you as a reader but I love when an author gives a glimpse past the HFN/HEA and shows the couple in the future. In this case we get bits for each of the couples in the series.


I'll say that I have a hard time being objective over this series because I've really fallen for all the characters and their journeys. Now of course Tash and Brandon tossed me over the edge of the cliff and kept me there through their entire story. It was a good place to be for this book and it left me completely satisfied when I hit that final page.


Every new book from Felice Stevens quickly becomes a favorite of mine because she combines a fantastic story with characters that grab you and don't let go. I encourage everyone to pick up this series and read it from the start and have tissues and comfort food/drink handy because you're going to need it.


Author Info
I have always been a romantic at heart. I believe that while life is tough, there is always a happy ending just around the corner. I started reading traditional historical romances when I was a teenager, then life and law school got in the way. It wasn’t until I picked up a copy of Bertrice Small and became swept away to Queen Elizabeth’s court that my interest in romance novels became renewed.
But somewhere along the way, my tastes shifted. While I still enjoys a juicy Historical romance, I began experimenting with newer, more cutting edge genres and discovered the world of Male/Male romance. Once I picked up her first, I became so enamored of the authors, the character-driven stories and the overwhelming emotion of the books, I knew I wanted to write my own.
I live in New York City with my husband and two children and hopefully soon a cat of my own. My day begins with a lot of caffeine and ends with a glass or two of red wine. I practice law but daydream of a time when I can sit by a beach somewhere and write beautiful stories of men falling in love. Although there is bound to be angst along the way, a Happily Ever After is always guaranteed.