Waiting for the Moon and You by L.J. LaBarthe - Book Blast with Giveaway 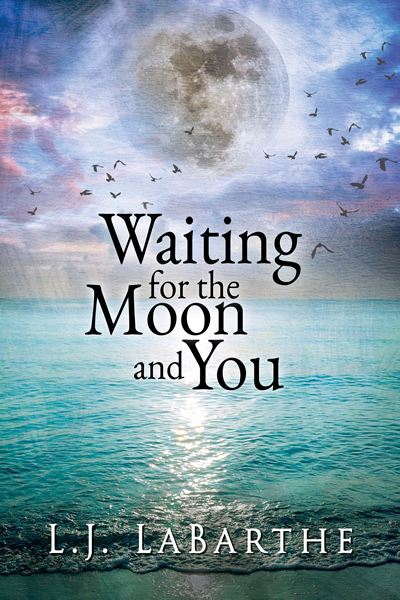 All his life, Leith has loved Aaron, and all his life, Leith has wondered if Aaron returns his feelings. Through high school, college, and beyond, Leith and Aaron are drawn together and pulled apart. Leith is finally convinced he and Aaron are not meant to be when a cowardly act of violence against Leith changes everything.
Aaron returns to Leith's side, but Leith struggles to accept that Aaron can love him now.
If Leith doesn’t overcome his doubts and fears, he will forever be waiting for the moon and Aaron… and true love.

“I miss those high school days, where the most pressing thing we had to worry about was whether we’d get a passing grade on a paper. I’m so pissed at myself that I missed the births of my niece and nephew. God, those kids are so adorable. And I missed the births of Aisha and Shahid’s twins! I’ve seen the photos on Facebook: they are such beautiful little girls. I’m real glad I’m home for her second pregnancy. I don’t want to be separate from my friends again. Or my family. God.” He shook his head. “I really am getting old.”
“Nostalgic isn’t old,” I said.
“Guess not. Anyway, what I most regret is something I’ve thought about off and on for years. Back in high school, since the prom, I kept thinking about one thing. I have to tell you this. I’ve had a crush on you forever. Since that night. I thought, why did I go to the prom with what’s-her-name, when I really wanted to go with you? And I know why, and it’s dumb, but I was scared that everyone would give me shit for being gay. Which I know I am now, not bi. I thought I was bi, but life and experience have taught me to be honest with myself, and I am completely gay. And I’m rambling. Shit. But. That was it. I’ve had a crush on you since high school, and I’m kicking myself for never doing anything about it.”
I had no idea what to say to him. His words filled me in ways I’d never imagined, and I had none of my own to respond with.
“Leith?”
“Wow,” I said.
“That a good wow or a bad wow?”
“It’s a wow wow. Just give me a minute.”
“Okay. But I want you to know that even though there’s this… thing I feel, I want us to be friends. We were friends first, and that’s the most important thing to me. Can we be friends still?” The question was asked in a plaintive tone.
I stopped walking, and turned to look at him. My knee gave a twinge, and I ignored it. Then was certainly not the time for a flare, I sternly told myself. No pain tonight!
“Aaron, I am completely floored. I have no idea what to tell you. Just one thing, of course we’re friends. Like you said, we were friends first, and that’s too damn important to me to throw away. The rest… god.” I ran a hand through my hair.
“Yeah, I didn’t think you’d like me back,” Aaron said.
“What?”
“It’s been too long, I know. Too much water under the bridge. So—”
“Shut up.” I reached for him before I knew what I was doing. I cupped his face between my hands, leaned in, and kissed him.
For a moment, a single heartbeat that felt as if it lasted forever, there was no reaction. And then Aaron leaned into me, his mouth opening to mine, his arms sliding around my waist, and he kissed me back. We stood together on the street, kissing each other as if our lives depended on it, as if the only way to survive was to draw oxygen from each other’s lungs. It felt so good, so natural, and so perfect that the only thing that went through my mind was Finally!

L.J. LaBarthe is a French-Australian woman, who was born during the Witching Hour, just after midnight. From this auspicious beginning, she went on to write a prize-winning short story about Humpty Dumpty wearing an Aussie hat complete with corks dangling from it when she was six years old. From there, she wrote for her high school yearbook, her university newspaper, and, from her early teens to her twenties, produced a fanzine about the local punk rock music scene.

She loves music of all kinds and was once a classical pianist; she loves languages and speaks French and English and a teeny-tiny smattering of Mandarin Chinese, which she hopes to relearn properly very soon. She enjoys TV, film, travel, cooking, eating out, abandoned places, urbex, history, and researching.

L.J. loves to read complicated plots and hopes to do complex plot lines justice in her own writing. She writes paranormal, historical, urban fantasy, and contemporary Australian stories, usually m/m romance and featuring m/m erotica. She has won a Rainbow Awards Honorable Mention and another award for Best Historical Gay Novel.
L.J. lives in the city of Adelaide, and is owned by her cat. 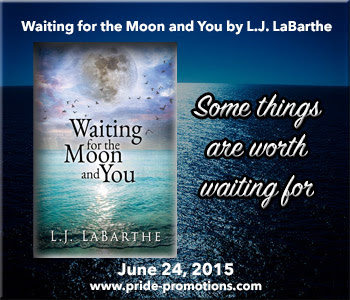 Rafflecopter Prize: E-copy of ‘Waiting for the Moon and You’ by L.J. LaBarthe