Dojo Boys: Dragon and Crow by Alex A. Akira - Blog Tour with Excerpt and Giveaway 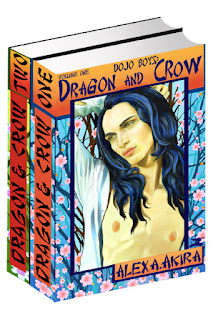 
Blurb: Twenty-three-year-old, Native American, Michael Black’s well-ordered life is disrupted one evening when he is ambushed at the dojo he frequents by a mysterious Japanese youth who goes by the name of Kiyoshi.


Soon circumstances have the gorgeous teen staying with Michael at his apartment. The gifted nineteen-year-old is an intriguing mix of angst, innocence and crafty intelligence, but Michael is honor bound by a promise to his sensei to keep his distance. Michael tries to keep his desire in check, but what can he do if the exquisite teen keeps kissing him?


Volume two finds Michael in deep water when, in trying to help Kiyoshi, he is persuaded by his sensei to participate in a joint government undercover operation to bring down a Yakuza lord.
Before long Michael is immersed in beautiful men, martial arts and espionage all to gain the trust and love of Kiyoshi. Secrets, lies, sex and action combine in this racy, romantic, adventure of two men, Michael Black and his sensei, Ichiro Kimura, navigating a dangerous path for true love. 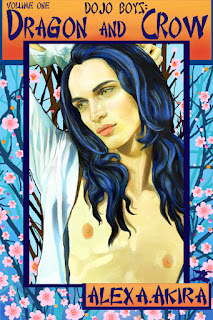 Michael groped for the light switch, a smile of triumph playing at his lips. Damn, I did it! I beat him! Flicking the switch, he turned, eager to view his skilled opponent and to bask in the accolades that he was sure to receive from Sensei Kimura.
His triumph descended to dismay in a flash. Who the hell is this?
A slight figure lay crumpled at the center of the practice room. Cautiously approaching the limp form, Michael’s heart sank even further. Lying unconscious on the gleaming bamboo floor was a Japanese boy. He looked to be about five-foot-seven, was very pale, and quite young.
“A kid? I beat up a kid?” Quickening his pace, Michael knelt beside the slim figure. Jesus, he’s like fourteen, fifteen? Beautiful. He looks like Ichiro. Better, actually, Michael admitted, surprised at his internal betrayal of his long-held crush on his sensei. He continued to stare down at the slight, fragile boy, eyeing the long blue-black hair that trailed sensuously around the figure’s unfamiliar gray karategi. 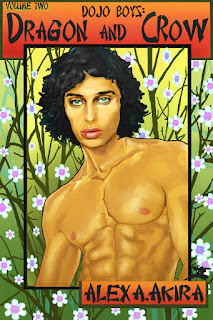 Who the hell is he? Why would they have me beat up a kid for my test? Puzzled, he glanced around the room, noting that he and the boy were alone. Ignoring his impending alarm, he gazed back to the unconscious figure.
The youth’s face was truly beautiful. Michael’s inner artist drank in the smooth, pearly skin, the long, sooty lashes, and the pale apricot color blushed across the boy’s delicate cheekbones. God… An aching hunger preceded the lurch of Michael’s cock, which nudged his lower abdomen telegraphing its interest. Get it together. He’s like … twelve! Suddenly realizing that the boy showed no sign of regaining consciousness, Michael snapped from his trance and shook his opponent’s shoulder.
“Hey!” He leaned over the placid body, hand stretching toward the longish neck for a pulse. The telltale thump throbbed beneath his fingers, but his proximity to the boy’s face had him pausing to stare at the youth’s sculpted lips. Christ, get away from him before you do something you’ll regret. Frowning, he started to shift upright when a relentless grip clutched his hair.
Caught off guard, Michael fumbled helplessly as his head was tugged abruptly toward the face beneath him. The beautiful mouth claimed his lips, stealing his breath and muffling his gasp as a hot tongue invaded his mouth. The agile member eagerly caressed its counterpart, igniting Michael’s senses. The tantalizing scent of ripe apricots surrounded him, dizzying him with sensual promises, and urging him to surrender.

Three Winners get $25 Amazon Gift Card each.
Seven Runners-up get a free e-copy of the prequel to this series – DOJO BOYS: The First Misunderstanding.
Enter the Rafflecopter NOW.
a Rafflecopter giveaway


June 3: A Celebration of Books


June 5: Elisa - My reviews and Ramblings