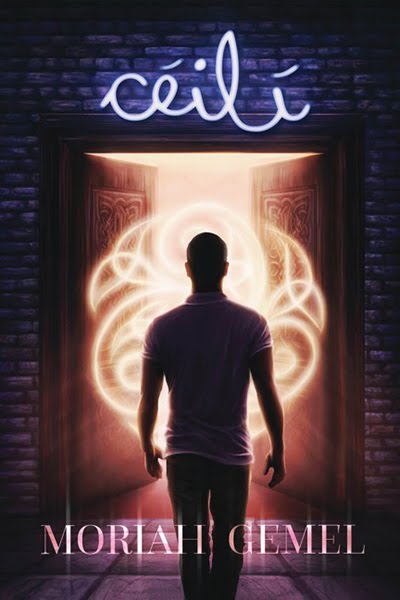 The Los Angeles music scene has not been kind to Devon Caelin. He struggles to fit in and has a streak of bad luck the length of the Sunset Strip. One rare rainy night, he drowns his sorrows from bar-to-bar, until he stumbles into an alley club called Céilí. He discovers that it’s home to a small community of mystical people making their way in the human world, and that he found it only because he is Fae himself. With mentoring from the pub’s proprietor, Eldan—a powerful Fae Lord protecting his kind in the city—Devon unearths his past and discovers his magical abilities. His life appears to be back on track—until a member of the Faerie Court is murdered and the secret of their world is threatened to be revealed.

Excerpt:
“This is where we’ll do the spell,” Eldan says. “I can open the channel easily enough, but I’d like you to assist in keeping it open. Stand behind me when I tell you to, and put your hands on my shoulders. If we’re compatible, I’ll be able to take some of your energy to bolster mine, just enough to maintain a stronger connection than I would on my own, all right? You might get a little dizzy, but I promise you’ll be okay.”
“I’m not afraid, Eldan.” Devon is excited to see this magic performed, to see the Queens. What will they be like, these women that Eldan is wary to speak of?
“No. You aren’t, are you?” Eldan smiles. “Well. Best get on with it then. Stand nearby, please?”
Devon settles himself just behind Eldan, and Eldan nods. Then, he pulls a little vial from his pocket and shakes it.
“Here we go.”
He uncorks the bottle, and Devon smells something almost metallic. Eldan walks to the first corner of the table, to the right, and pours a drop of whatever’s inside the vial over the little pile of dirt.
“Cré.” His hand hovers over the bowl, and the dirt spreads and forms a flat plane under his palm. Eldan smiles and walks on.
He walks to the back right of the table and pours a drop into the empty bowl. “Aer,” he says and his hand hovers. The bowl trembles, and the dust motes in the air within it coalesce and spin. He walks on.
The third bowl holds sticks, and Eldan pours the liquid on them before hovering his hand, causing them to burst into flames. “Tine.” Devon can’t help but push his breath out and shake his head. This is cool. All this magic, it’s really real. He thought it was a story for children, but magic is real, and he’s a part of it. He never thought much about fairytales but now he wishes he had, because it would make this moment so much better.
Finally, Eldan pours into the fourth bowl, filled with water, and his hand hovering creates little waves that splash on the sides of the bowl gently, as though upset. “Uisce,” he says and then he walks on.
He circles the table counter-clockwise three times and, when he reaches the head of the table once more, he nods to Devon. “Now.”
Devon steps up as Eldan turns away and puts his hands on Eldan’s slim, strong shoulders. Immediately, his palms tingle, as Eldan waves a hand. The mirror in the center of the table stands up, reflecting them. Eldan presses a palm to the center of it.
“Oscailt agus a léiriú,” Eldan says. Devon wishes he knew what the hell he was saying, but it’s pretty, in any case. Celtic? Gaelic? Something. “Na Ríona I Talún Samhraidh.”
The mirror clouds, and Devon licks his lips and stands on his tiptoes to see over Eldan’s shoulder. Nothing happens, though, for long moments, in which Eldan’s breathing comes quick and loud. Devon squeezes his shoulders, and Eldan whimpers faintly. But he slows down, and Devon keeps squeezing, staring at what he can see of Eldan’s face, staring at the delicate line of his jaw, his high cheekbone, the flutter of an eyelash, the jut of his nose, which is freckled and fair.
But then the clouds part, and there they are.

Today I’m very lucky to be interviewing Moriah Gemel author of Céilí
Hi Moriah, thank you for agreeing to this interview. Tell us a little about yourself, your background, and your current book.

Thank you for having me. I'm an author at night and a stay-at-home mom during the day, and I've been writing since the age of seven. My current book is called Céilí and it's about a man who finds where he belongs after a lifetime of searching, and how he comes to protect that life at all costs.

1) What is the most satisfying thing about being a writer?
Finishing a story. When it's been written and edited to the very end, and you close out of that document one last time, and send it out into the world, whether it's published or not—that's a magical moment. So is getting the first review.

2) Do your characters ever take over your writing and make the story go somewhere you hadn’t originally planned?
All the time. I mean, I outline, so I have a path they're on, but sometimes they stray and pull me away and I have to indulge them before getting them back in the right direction.

3) How did you celebrate the release of your book?
I don't! Not really. Maybe I'll make myself my favorite dinner that night or something, but I'm too busy to stop my life to have a celebration. And my husband is way too busy, between going to work AND going to school and sleeping only four to five hours a day, to do something for me. And my friends mostly celebrate for me by buying my book, so. I just have a quiet day and treat myself a little bit more nicely that day.

4) How did you come up with the idea for this book?
There was a picture of a certain celebrity in a fur vest, and he looked like the most interesting person I'd ever seen. He looked sexy and self possessed and downright magical. And his ears looked kind of pointed, too. S0 playing around with my friends on Tumblr, we came up with the story that he was an elf lord who ran a bar, and was a kind of less misogynistic Hugh Hefner sort who kept a harem around him. And we all dallied and nobody was writing the story, so I decided to. It was a very rough first draft, but it got a lot of attention in my circles, so when the time came to publish a new  novel after my first one, I pitched this idea and Céilí was born.

5)  Have you ever written naked?
Absolutely! When I get out of the shower, I like to air dry with some lotion or baby oil on my skin to keep it soft, and that requires being naked. So I lay out a towel wherever I decide to be, whether that's on the bed or on my couch, and I get out my laptop and I type away or do whatever else I'm doing at the time. I have no shame about that. 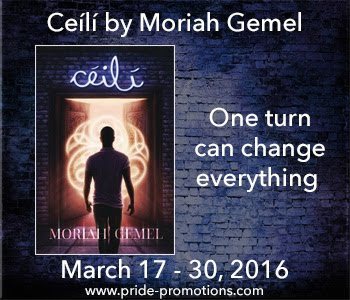