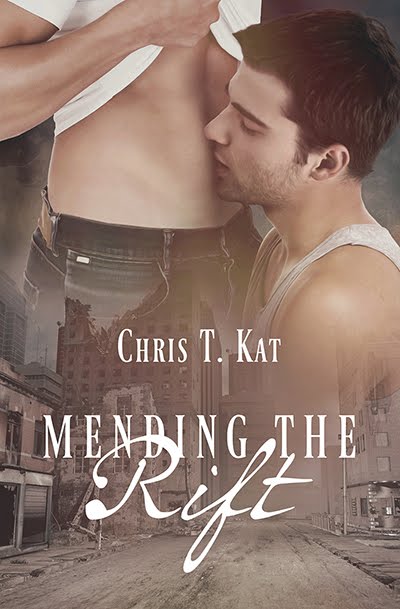 In a future where man’s ability to reproduce is severely compromised, humanity has adapted to survive. Breeders—male and female—have become precious commodities, and they are strictly guarded and subject to limitations.
Luca Walker is a breeder. Though he knows what’s expected of him as the youngest son of the Northern Confederacy’s Vice President, he’s held out against the pressures of an arranged marriage because he longs to marry for love, not duty. But he’s been promised to Colonel Liam Smith and there’s little he can do about it, no matter that Luca is secretly in love with his bodyguard, Marcus Gray.
When Luca finds himself pregnant with Marcus’s baby, Smith is furious and vows to take what is his—by force, if necessary. Now Luca must fight for his life and the life of his unborn child… as well as the love of Marcus and the happily ever after he’s always dreamed of.

Marcus rappelled off and stepped onto the ground with a crunch of his boots. Pointing at the opening with the askew ladder, he asked, “Don’t tell me you seriously considered climbing down this way.”
Luca shrugged. “I’d have preferred spontaneous levitation, but it didn’t happen.”

He yelped when Marcus put an arm around his torso and lifted him to his feet, as if he weighed nothing. “Hey!”

Marcus silenced him with a glare, and Luca gritted his teeth while Marcus thumped dust off his clothes. “Your father is livid.”

Luca swallowed. He’d expected worried, maybe a bit mad, but livid? His father never got furious at him. Not for long, anyway. Being the baby of the family had its perks. “Why?”

“Why? Seriously, Luca, you have to ask why?” Marcus patted Luca’s behind more firmly than was strictly necessary.

Luca shifted, trying to get away from Marcus’s arm. When that didn’t help, he slapped Marcus’s hands away and stepped aside. He couldn’t think when he was so close to Marcus—when the man touched him, he sent shivers up and down his spine. He ignored the glower Marcus directed at him. “Yes, seriously. He knows I don’t want to marry Smith. I don’t want anything to do with all that shit. I want to decide what I’m going to do with my life.”

Marcus shook his head. “Smith is a good man. My brother Kyle worked for him. He said he always treated his people well. If you want I could try to get Kyle on the phone so you can talk to him. That is, if I can get a hold on him. Trust me, you’ll be in good hands.”

“No?” Marcus raised an eyebrow.

Luca huffed, a small smile forming on his lips. “Well, yes, of course I want to be in good hands. But I want someone to love me, and not just for my ability to become pregnant. I want… you.”

Luca’s heart thundered in his rib cage. There, he’d said it. The ball was in Marcus’s court. Sure, it had only been one night, and Marcus’s reaction afterward hadn’t been promising, but maybe he’d just been scared? Maybe he feared to lose his job? Nonetheless, there was more going on between them, and they both knew it. That one night had just been the last logical step. Luca regretted nothing.

For a moment Marcus seemed startled, and there was a softness in his eyes that was solely reserved for Luca. The softness vanished too quickly for Luca’s liking.

Instead, Luca was greeted with Marcus’s usual, scrutinizing gaze. “You don’t want me, and you better never mention this again. It was a mistake. Now get it out of your head and be a good boy.”

Once I saw the cover for Mending the Rift and read the blurb, I wanted to read it. I'm usually not a huge mpreg fan, but I do occasionally read ones that catch my eye. This definitely caught my eye first as a dystopian set M/M romance and second with the mpreg storyline.

World War 3 has changed the landscape of the world. There are now two factions with very different ideas of how their society takes care of those that are still able to bear children. The Northern Confederacy makes sure that their 'breeders' are paired with the right mates and go through the strictest testing to ensure that the pairs are well matched.

Luca, is the son of the Vice President of the Northern Confederacy and comes from a long line of strong breeders. However, that's not what he envisions for his life. He wants a real love match instead of being paired with the perfect mate and hoping that they connect. He's met that someone but he's also been paired to marry another against his wishes. Luca decides to take matters into his own hands and run away to delay the marriage. His bodyguard Marcus ends up finding him, just in time, too.

I'll admit that this book may not be for everyone with the way the author describes the 'breeders' and what each society has done to either protect them or use them. They have become valuable commodities in the North to ensure the continuation of the human race. In the South they've become chattel, continually used to breed more and more children to have more breeders or soldiers. Love isn't the driving factor in building and creating families anymore, necessity has taken over nature in this case. That doesn't mean there isn't love, it's just not the reason couples marry and have children any longer.

I thoroughly enjoyed the storyline in this book, and the world building was on par with a non-romance science fiction story. I thought Luca, Marcus, and the secondary characters around them were well crafted and multi-dimensional. Where the story lost that half star for me was getting to see Luca and Marcus develop their relationship. I want to see that initial meeting, the first kiss, and that shy stage where they're not sure of the other person's feelings yet. Otherwise Mending the Rift was for this reader a very enjoyable story, one where I'd like to see more from this particular world setting even.

I highly recommend this book to readers who enjoy books by Victoria Sue or Shannon West.

Today I’m very lucky to be interviewing Chris T. Kat, author of Mending the Rift.
Hi Chris, thank you for agreeing to this interview. Tell us a little about yourself, your background, and your current book.

1)  Tell us something no one else knows about your characters.

I’ve thought about this question for a while, but nothing came to mind. Everything that’s to know about Luca and Marcus is in the story. Now, how the relationship between Nicholas and Greg, Luca’s parents, work—that’s a different matter. ;-)

2)  Have you ever had writer’s block? How did you overcome it?

No, I’ve never suffered from writer’s block. There has been the occasional book that I needed to set aside for a few weeks because something was amiss, or didn’t click into place, but I’ve never been stumped and didn’t know how to get a story back on track.

3)  What book you’ve written would you like to see made into a movie?

That would definitely be Breeding Stations. Not only do I love Berit, the spunky commander, but I also love Tom with his tail and frill, and also Fleur, Berit’s animal companion. Then there are Carson and Niyara too. There’s an overall character cast that I grew extremely fond of, and the book contains lots of actions scenes that I had a blast writing.

4)  Do you work on an outline or plot or just let the story takes you where it wants to go?

Usually I have a rough outline in my head before I start writing but I don’t know all the details. Sometimes characters insist on a change of pace, or they need a different character development, and I usually follow my characters’ lead. Most of the time they know best. 

Chris T. Kat lives in the middle of Europe, where she shares a house with her husband of many years and their two children. She stumbled upon the M/M genre by luck and was swiftly drawn into it. She divides her time between work, her family—which includes chasing after escaping horses and lugging around huge instruments such as a harp—and writing. She enjoys a variety of genres, such as mystery/suspense, paranormal, and romance. If there's any spare time, she happily reads for hours, listens to audiobooks or does cross stitch.
Where to find the author: 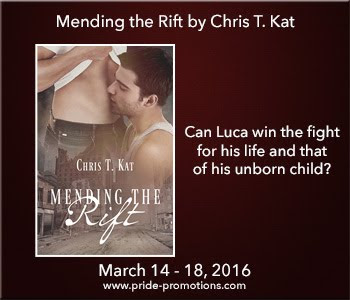