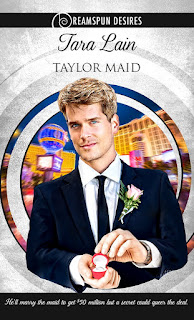 He'll marry the maid to get $50 million but a secret could queer the deal.

On the eve of his twenty-fifth birthday, the billionaire’s son discovers that despite being gay, he must marry a woman before midnight or lose a fifty-million-dollar inheritance. So he hightails it to Las Vegas… where he meets the beautiful maid Ally May.

There’s just one rather significant problem: Ally is actually Alessandro Macias, son of a tough Brazilian hotel magnate. But if Ally keeps pretending to be a girl for a little while longer, is there a chance they might discover this marriage is tailor-made?

Taylor held Ally’s arm tightly as they walked, the play of muscle under the jacket very noticeable—and appealing. Must be all that bathtub scrubbing.
The minister pointed to some documents on the table. “Please sign these.”
Ally clutched his wrist. He smiled. Sound calm. “Come on, easy does it.” He barely looked at the license as he signed, he was so busy focusing calming energy on Ally. “Okay, your turn.”
She swallowed hard, looked at him like she’d just run over the deer in the headlights, grabbed the pen, and signed Ally May in a scrawl.
The minister clapped his hands. “Lovely, lovely. Come now.”
He grabbed her hand, ignored the electricity that sparked up his arm at the feel of her warm skin, and pulled her to the head of the aisle.
A woman sat at an organ and started playing the wedding march.
Ally shook her red hair again. “No, I don’t want to march.”
“Okay, we’ll walk up together, how does that sound?”
“Okay.”
Taking her hand, he started to walk, and she took off like there was a prize for how fast you could get to the altar. The lady on the organ sped up the wedding march to a wedding run, and it almost made Taylor laugh—almost.
He kept hold of Ally’s hand. Her flowers shook like Disney had animated them. She set them on the front seat of the first row of chairs.
The minister walked around them since he’d gotten there last, looked at his watch, and picked up the Bible. Must have another couple coming in soon. “Dearly beloved, we are gathered here to join this man and this woman in holy matrimony.”
“Taylor?”
The minister stopped. “Is everything all right?”
She shook her head. “There’s something I need to tell you.”
Taylor nodded. Uh-oh. “Okay.”
With a bang that made them all jump an inch, the door to the chapel burst open. A big bald man stood there, frowning, staring around the room.
The minister cleared his throat. “If you don’t mind, there’s a wedding in progress.”
The man’s frown got deeper. “Yeah, okay. Sorry.”
“Did you wish to take a seat and attend the ceremony?”
“Uh, no. I’ll stand.” He sounded like he’d escaped from Guys and Dolls.
The minister looked at Ally. “Miss, I believe you were saying something?”
She’d turned white as her shirt. Her big eyes strayed toward the door and then back to Taylor’s face. “No, nothing. Just get on with it.”
Taylor whispered, “Shall I ask him to leave? Is he bothering you?”
“No, no. Don’t do that, please.”
God, he felt like he was torturing her. “Do you want to change your mind?”
The door to the chapel closed. The intruder was gone.
She glanced at the entrance, sighed, and stared at her shoes.
“Ally?”
For a full thirty seconds she said nothing, then finally shook her head. “No. Continue.”
The minister smiled. “Ah, good.” He started talking about the sacred union of marriage.
Okay, that made Taylor feel fully weird. But hell, people got married because they drank too much and wanted memories from Vegas. His union wasn’t the strangest—was it?
“Do you, Taylor Fitzgerald, take this woman to be your lawfully wedded wife?”
“What? Oh yes, I do.”
“And do you, Ally May, take this man to be your lawfully wedded husband?”
He squeezed her hand. He kind of expected another long wait, but she piped up, “Yes.”
“Do you have a ring?”
Taylor produced the beautiful diamond and sapphire circle. He had to reach down for her hand, and it shook so hard he could barely get the ring on, but it fit perfectly.
He handed her his ring, and she managed to get it on his left ring finger, but it was a near thing—twice she almost dropped it.
The minister clapped his hands. Probably out of relief. “You may kiss the bride.”
Well, hell, he’d forgotten that part. She looked up at him, and those brown eyes glittered. Oh, she wears contacts. Wonder why she needs glasses? Her breath smelled like the mint ice cream she’d eaten for dessert, and it made him shiver. He leaned forward and pressed his lips gently against hers. Her mouth was freezing like her hands—but sweet. So sweet.
He pulled back, and she instantly stared at the floor. God, his cock even danced a bit at that kiss. Maybe when he went to bed he’d have time to think about why he responded like this to a woman. He never had before. 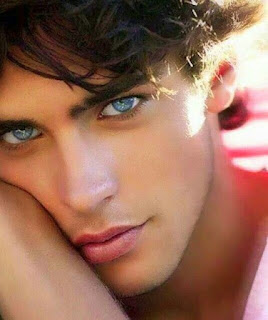 Ally May Aka Allesandro Macias – The Hotel Maid

Age: 22
Height: 5’10”
Build: Slender and willowy
Hair: Appears to be red, but is actually black and long
Eyes: Appear to be brown but are actually as blue as the sea
Sexuality: Gay
Family: Son of a Brazilian hotel magnate who is both controlling and loving
Profession: In college and worked for his father until he ran away to become a hotel maid; singer
Crisis: Must escape Las Vegas and his father before he’s sent back to Brazil to marry a woman of his father’s choosing
Loves: Music and Taylor Fitzgerald, the man he marries, although Taylor doesn’t know that Ally is a man.