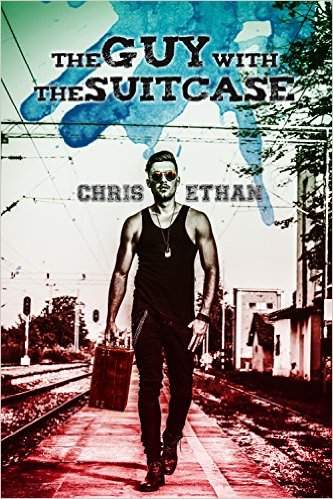 Pierce is homeless.
Young and strong-willed Pierce has been living in the streets of New York City for six months, since his parents kicked him out of their perfect, Christian, suburban house. Pierce is gay. And he is suffering the consequences for being true to himself.

Rafe is homeless.
He is also sick. Impressionable, but far from innocent, Rafe ran away from home almost a year ago. His sickness is slowly killing him. But Rafe is not a hopeless case. He has learned to get by. Nights of paid passion turn to sheltering warmth from the imminent New York winter.

And then there's a suitcase. Pierce's suitcase, which holds secrets from everyone including its owner.

When their worlds collide, their lives intertwine and when the world seems bent on bringing the two souls to their knees, fate has other plans for them.

He saw a phone booth and the longing to call home clawed in his heart just like his veganism had supposedly and he found himself dialing home in no time.

“Hello!” came the answer from who other than his mom.

There was a deafening pause for a few seconds.

“Why are you calling, Pierce? Did you decide to atone for your sins and claim the Heavenly Father as your Lord and Savior again?”

Pierce rolled his eyes. “No,” he told her, “I called to tell you that I found a job last month and soon I’ll be able to afford a room to live in”.

Another long pause. He was trying to determine whether the pause was a delay in the line, or his mother thinking what insult to throw next. “Pierce, you know you always have a home here, with your father and I. All you have to do is ask for forgiveness and stop…sinning,” she said with her shrill voice. A voice that actually had the ability to turn Pierce into the devil his mother was so afraid of.

“I can’t believe your  homeless  son is calling you after six months and that’s all you have to tell him,” he asked maintaining his calm. For now.

She exhaled with attitude. The attitude that said, “Oh, Pierce, you’re so young and, you know nothing”.

“I cannot give up my place in Heaven because my son has decided to,” she said in a calm manner, “I don’t know what kind of people you’ve met to have made you this way, but I can’t have you sinning under my roof.”

He could picture her in his head. The way she would smile gently. The way her eyes would squint and her cheeks would ball up, forming a fake tenderness that could send Pierce ballistic.

“Go fuck yourself,” he said, and slammed the phone back on the receiver. There were a million things he wanted to tell her. But that seemed to sum everything up. She was not a mother. She was a puppet. And he didn’t know if puppets had the ability to acquire knowledge or even listen.

Chris Ethan is a book whore. He enjoys selling his feelings for money and other pleasures and is blatantly unashamed to do so for as long as he breathes. Chris Ethan is also a persona for Rhys Christopher Ethan, author of fantasy and sci-fi. He uses Chris Ethan to share stories of adult queer romance with those who need it. Before you delve into his books however, be warned. He likes putting his characters through shitstorms and hates anything conventional. But then there's that darned happy-ever-after. Also, he likes swearing. Deal with it!