Promises Part 2 by A.E. Via - Blog Tour with Excerpt 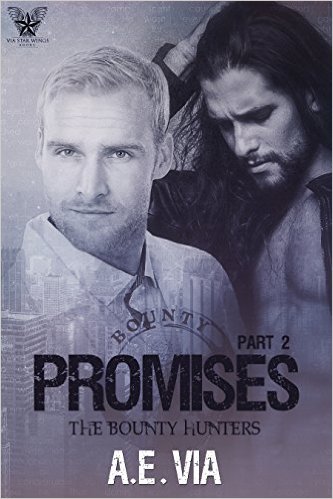 Blurb
Roman “Quick” Webb is one badass bounty hunter on the crime-filled streets of Atlanta. He’s fearless when it comes to carrying out his dangerous job alongside his longtime best friend and business partner, Duke. However, there is one thing that has begun to cause Quick concern and it’s the dreadful thought of living out the rest of his life alone. Seeing his best friend and his son fall in love and sharing the special connection that only true soulmates can, has made him all the more aware of what’s lacking in his life.
Love.
Dr. Cayson Chauncey has been wildly attracted to the big, tattooed hunter for almost a year, ever since he performed the surgery that saved Quick’s best friend’s life. Cayson must’ve mistaken Quick’s gratitude for something more, because the one time he tried to make his desires known, he was harshly rebuffed and left on the man’s doorstep feeling stupid for hitting on an obviously very straight man.
Cayson never dated a man who was willing to come out of hiding and be with him. Now at almost forty, Cayson is intent on no longer being anyone’s dirty secret. Having experienced countless disappointments, and having taken a stand not to fall for any more tricks, Cayson is more than a little skeptical when Quick comes around asking for a second chance to prove himself. The gorgeous man had already made it clear he was definitely uninterested in Cayson… or so he’d thought.
Dr. Chauncey stirred up Quick’s suppressed, most carnal desires from a place deep down inside of him. He’d reacted so badly the first time that now his sexy surgeon wanted nothing to do with him. It was going to take a fair amount of patience and a whole lot of wooing involved as Quick sets out to convince Cayson that he’s worth another chance and that he is the brave lover who Cayson has been looking for.
With a scorned ex and a very dangerous job thrown into the mix, Cayson’s happiness and all of Quick’s promises may not be as easy to keep as they’d hoped. PARTS ONE AND TWO IN THIS SERIES CAN BOTH BE READ AS STANDALONES. THERE ARE NO CLIFFHANGERS IN EITHER BOOKS. 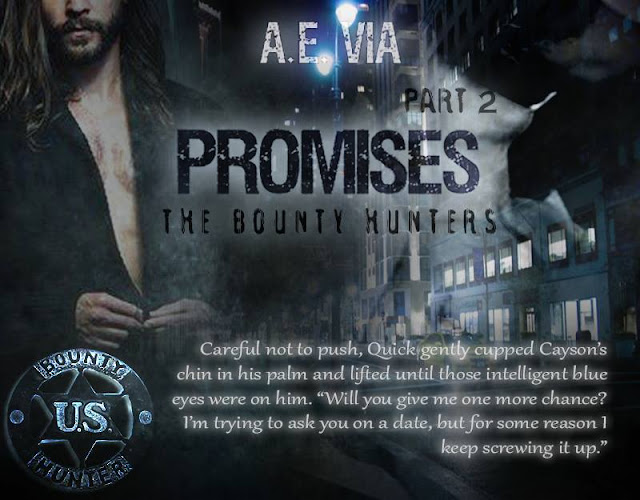 “Stop knocking on my damn door like that!” Quick shouted
from the second landing. He was trying to navigate the short
distance between him and the front door, but was moving slowly.
Using his leaf blower in the yard earlier today probably wasn’t a
great idea, but he’d never been one to sit around and wallow in
pain. He came from a long line of tough men. His father worked
their farm through every ailment he ever got, so did his
grandfather. Surely, Quick could do the same.

When he unlocked the bolt, he twisted the knob and was
almost knocked back off his feet when he saw Dr. Chauncey –
um, Cayson – standing there on his porch with his large medical
bag at his feet. He had on a puffy, mid-thigh, black North Face
parka with the large hood trimmed with tawny brown fur. He
looked adorable all bundled up and rosy cheeked from the brisk
temperature.

“I’m sorry. I didn’t mean to knock like I’m the police. I got a
little worried when it took a while. I came... um... Duke told
me... he said maybe I should come by. Totally his idea. I promise
I’m not just swinging by. As a matter of fact, I think it’s rather
rude to stop by unannounced, but Duke said—”

“Cayson, would you like to come in and get out of the cold
for a bit?” Quick smiled, pulling the door open wider. The man
was blabbering like a silly fool. But Quick new exactly why
Cayson was nervous about coming into his home again. He’d
make sure the man felt welcome this time.

He wasn’t typically an asshole, especially to nice doctors
who saved his best friend’s life, but damn if Cayson didn’t catch
him off guard that afternoon he’d come home to find the sexy
doctor in his personal space. He was supposed to be there to
check up on Duke and Vaughan’s recovery, but Cayson was
examining everything but his patients when Quick had come in
wearing his bounty hunting gear. Those focused, blue eyes
brazenly surveyed him like he was a piece of USDA prime rib in
a butcher’s window. He could see Cayson’s chest rise and fall
with his elevated, lustful breathing. But to do it right in front of
his son and Duke, that wasn’t cool. He was a private man. If the
doctor was interested in him, then he should’ve approached
Quick privately and asked him out like a real man, not used
trickery.

He’d been attracted to men in the past – very deep past – but
he’d married a woman and had dated a couple more after the
divorce. Now, this handsome, sexy, slightly nerdy in a charming
way surgeon was rapidly igniting embers that hadn’t burned in a
long time, and Quick had handled it badly, scaring Cayson off.
He’d promised Duke and Vaughan that he’d fix it. He’d call the
doctor and apologize, make things right, but he hadn’t. He’d
copped out. Nerves. Anxiety. Maybe even fear had gripped and
held him fast.

“Actually, I wouldn’t mind coming in. Thank you.” Cayson
took a breath between ramblings and hefted his large bag to step
across the threshold.

Quick immediately noticed Cayson scanning his chest as he
walked by, but he didn’t take offense this time. The man was a
doctor and Quick was riddled with bruises. It was clear Cayson
had been sent by his son or Duke to check him out. “I already
know why you’re here. Thank you for coming.” 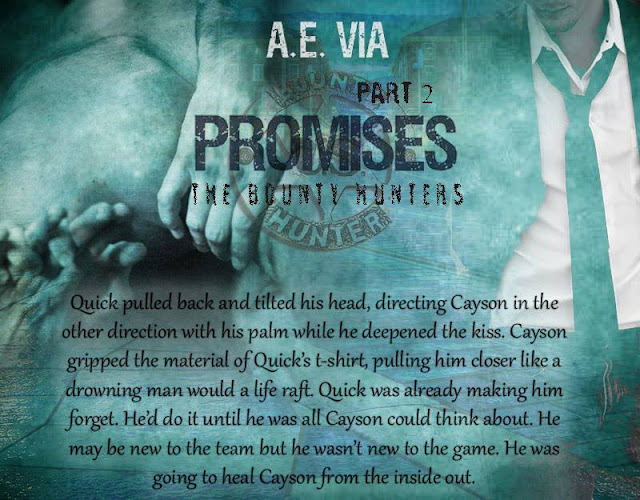 When she’s not clicking away at her laptop, she devotes herself to her family—a husband and four children, her two pets, a Maltese dog and her white Siamese cat, ELynn, named after the late, great gay romance author E. Lynn Harris.

While this is only her eighth novel, she has plenty more to come. So stalk her – she loves that - because the male on male action is just heating up!

Go to A.E. Via’s official website http://authoraevia.com for more detailed information on how to contact her, follow her, or a sneak peak on upcoming work, free reads, and where she’ll appear next.