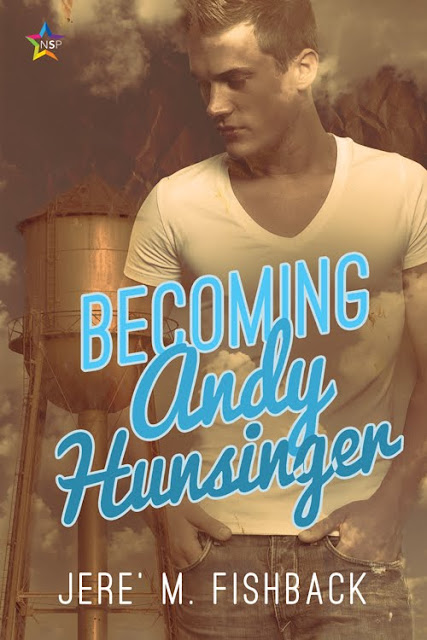 It’s 1976, and Anita Bryant’s homophobic “Save Our Children” crusade rages through Florida. When Andy Hunsinger, a closeted gay college student, joins in a demonstration protesting Bryant’s appearance in Tallahassee, his straight boy image is shattered when he is “outed” by a TV news reporter. In the months following, Andy discovers just what it means to be openly gay in a society that condemns love between two men and wonders if his friendship with Travis, a devout Christian who’s fighting his own sexual urges, can develop into something deeper.

On my seventh birthday, my parents gave me a Dr. Seuss book, The Cat in the Hat.

I still have the book; it rests on the shelf above my desk, along with other Seuss works I’ve collected. Inside The Cat in the Hat’s cover, my mother wrote an inscription, using her precise penmanship.

“Happy Birthday, Andy. As you grow older, you’ll realize many truths dwell within these pages. Much love, Mom and Dad.”

Mom was right, of course. She most always was. My favorite line is this one:

“Be who you are and say what you feel because those who mind don’t matter and those who matter don’t mind.”

Loretta McPhail was a notorious Tallahassee slumlord. On a steamy afternoon, in August 1976, she spoke to me in her North Florida drawl: part magnolia, part crosscut saw.

“The rent’s one twenty-five. I’ll need first, last, and a security deposit, no exceptions.”

McPhail wore a short-sleeved shirtwaist dress, spectator pumps, and a straw hat with a green plastic windowpane sewn into the brim. Her skin was as pale as cake flour. A gray moustache grew on her wrinkled upper lip, and age spots peppered the backs of her hands. Her eyeglasses had lenses so thick her gaze looked buggy.

I’d heard McPhail held title to more than fifty properties in town, all of them cited multiple times for violation of local building codes. She owned rooming houses, single-family homes, and small apartment buildings, mostly in neighborhoods surrounding Florida State University’s campus. Like me, her tenants sought cheap rent; they didn’t care if the roof leaked or the furnace didn’t work.

The Franklin Street apartment I viewed with McPhail wasn’t much: a living room and kitchen, divided by a three-quarter wall; a bedroom with windows looking into the rear and side yards; and a bathroom with a wall-mounted sink, a shower stall, and a toilet with a broken seat. In each room, the plaster ceilings bore water marks. The carpet was a leopard skin of suspicious-looking stains, and the whole place stank of mildew and cat pee.

McPhail’s building was a two-storied, red-brick four-plex with casement windows that opened like book covers, a Panhandle style of architecture popular in the 1950s. Shingles on the pitched roof curled at their edges. Live oaks and longleaf pines shaded the crabgrass lawn, and skeletal azaleas clung to the building’s exterior.

In the kitchen, I peeked inside a rust-pitted Frigidaire. The previous tenant had left gifts: a half-empty ketchup bottle, another of pickle relish. A carton of orange juice with an expiration date three months past sat beside a tub of margarine.

Out in the stairwell, piano music tinkled—a jazzy number I didn’t recognize.

McPhail clucked her tongue and shook her head. “I’ve told Fergal—and I mean several times—to close his door when he plays, but he never does. I’m not sure why I put up with that boy.”

McPhail pulled a pack of Marlboros from a pocket in the skirt of her dress. After tapping out two cigarettes, she jammed them between her lips. She lit both with a brushed-chrome Zippo, then gave me one.

I puffed and tapped a toe, letting my gaze travel about the kitchen. I studied the chipped porcelain sink, scratched Formica countertops, and drippy faucet. Blackened food caked the range’s burner pans. The linoleum floor’s confetti motif had long ago disappeared in high-traffic areas. Okay, the place was a dump. But the rent was cheap, and campus was less than a mile away. I could ride my bike to classes and to my part-time job as caddy at the Capital City Country Club.

The past two years, I’d lived in my fraternity house with forty brothers. I took my meals there, too. If I rented McPhail’s apartment, I’d have to cook for myself. What would I eat? Where would I shop for food?

Other questions flooded my brain. Where would I wash my clothes? And how did a guy open a utilities account? The apartment wasn’t furnished. Where would I purchase a bed? What about a dinette and living room furniture?

And how much did such things cost? It all seemed so complicated.

Lack of privacy at the fraternity house would pose a problem for me this year. Over summer break—back home in Pensacola—I’d experienced my first sexual encounter with another male, a lanky serviceman named Jeff Dellinger, age twenty-four. Jeff was a second lieutenant from Eglin Air Force Base. I met him at a sand volleyball game behind a Pensacola Beach hotel, and he seemed friendly. I liked his dark hair, slim physique, and ready smile, but wasn’t expecting anything personal to happen between us.

After all, I was a “straight boy,” right?

We bought each other beers at the tiki bar, and then Jeff invited me up to his hotel room. Once we reached the room, Jeff prepared two vodka tonics. My drink struck like snake venom, and then my brain fuzzed. Jeff opened a bureau drawer; he produced a lethal-looking pistol fashioned from black metal. The pistol had a matte finish and a checked grip.

“Ever seen one of these?” Jeff asked.

Jeff raised the gun to shoulder height. He closed one eye, focused his other on the pistol’s barrel sight. “Shooting’s almost…sensual.” Then he looked at me. “It’s like sex, if you know what I mean.”

I shrugged, not knowing what to say.

Jeff handed the pistol to me. It weighed more than I’d expected, between two and three pounds. I turned it this way and that, admiring its sleek contours. The grip felt cold against my palm and a shiver ran through me. I’d never fired a handgun, never thought to.

Jeff bobbed his chin. “One bullet’s in the firing chamber, seven more in the magazine; it’s a semiautomatic.”

After I handed Jeff the gun, he returned it to his bureau’s drawer while I sipped my drink, feeling woozier by the minute. Jeff sat next to me, on the room’s double bed. His knee nudged mine, our shoulders touched, and I smelled his coconut-scented sunscreen.

Jeff laid a hand on my thigh. Then he squeezed. “You don’t mind, do you?”

I looked down at his hand while my heart thumped. Go on, chickenshit. He wants you.

Moments later, my swim trunks lay in a corner and Jeff knelt in front of me, slurping away. Currents of pleasure crept through my limbs, and then I felt a buzzing between my legs. When I came, I thought I’d pass out. I closed my eyes and drew a deep breath. Then I watched fireworks explode inside my head.

Jesus, this feels good. Why haven’t I done this before?

Thereafter, we rendezvoused several times during summer, always at the same hotel.

“I get a military discount here,” Jeff explained.

The first few times, Jeff took a passive role. But then he asked me to surrender my cherry, and I acceded. Jeff’s initial penetration felt painful, but soon I relaxed, and I discovered a side of myself I hadn’t known existed. A fullness and warmth crept through my body as Jeff thrust inside me. The whole thing felt so…natural.

Whenever I lay in bed with Jeff, after sex, I always rested my head on his chest, and while I listened to his heartbeat I felt like a guy released from jail. I knew I was queer then—there was no doubt about it—and the realization made me feel a bit foolish, like I was the last guy at the party let in on the joke. I was a faggot, a fudge-packer, a butt pirate. My attempts at dating women had been a ruse—I’d only done it to fit in with my fraternity brothers—and what a waste of time it had been for all concerned.

Like most guys, I’d masturbated chronically since my early teens, and now I knew why visions of naked men crept into my thoughts whenever I did so. Now I knew why my friends’ girlie magazines had never held my interest. No wonder showering with my PE classmates in high school had thrilled me so.

It all seems stupid in retrospect. How could I not know I was gay? But in 1976, most guys weren’t in touch with their inner selves. I don’t know why, but we weren’t. Feelings weren’t a topic of male conversation. Emotional needs took a backseat to more “important” matters: achievement, sports, and politics—“normal” concerns, if you will.

My summer with Jeff changed all that, for me at least. In the sexual sense, I had found my mother lode. I belonged in the arms of a man—I would settle for nothing else—and I was fine with it. But now fall had arrived, and I would live in Tallahassee again. I couldn’t drive to Fort Walton Beach every weekend. That would mean a three-hour drive on monotonous Highway 90, passing by cow pastures and slash pine forests, just to meet up with Jeff. And how much sense did that make? I needed a boyfriend who lived nearby, and assuming I found one, I would face a few problems.

If I remained at the Lambda Chi house I’d share a room with a fraternity brother, so I’d have no privacy. Plus, the guys at Lambda Chi wouldn’t understand if I dated another male, no way.

Wasn’t it time I had my own place?

Now, in her run-down rental apartment, McPhail blew a stream of blue smoke. After the cloud rose to the kitchen’s cobwebbed ceiling, she looked at me with her insect eyes.

I studied my shoes and licked my lips. Go on: do it.

I swung my gaze to my future landlady.

Andy Hunsinger, age twenty-one, is a college student attending Florida State University in Tallahassee. For three years he's played the role of a straight fraternity boy, trying to please everyone but himself. But during the summer after his junior year he has an affair with a young Air Force lieutenant, and Andy first realizes he's gay. Andy's a very sensitive and bright young man. He also has a talent for singing and acting. He comes from a conservative Christian family in Pensacola, and coming to his parents and younger brother is a painful process.  He walks a crooked path as he seeks the love of another man in conservative Tallahassee.

Jere’ M. Fishback is a former journalist and trial lawyer who now writes fiction full time. He lives with his partner Greg on a barrier island on Florida’s Gulf Coast. When he’s not writing, Jere’ enjoys reading, playing his guitar, jogging, swimming laps, fishing, and watching sunsets from his deck overlooking the Intracoastal Waterway.