Into the Mystic Volume 1 - Anthology - Release Blitz with Giveaway 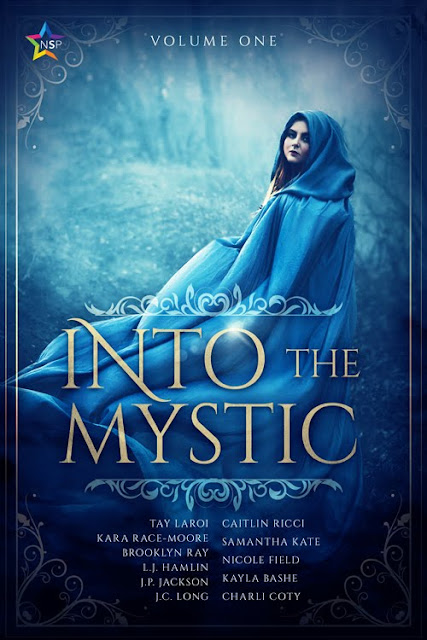 Dove in the Window by Kara Race-Moore – As if the Great Depression wasn’t bad enough, Cissy’s first love is back from the dead.

Bottom of the River by Samantha Kate – The demon isn’t always the monster.

If You Want to Walk by Nicole Field – Follow Chess into the Underneath and meet the strange creatures she finds there.

A Tended Garden by J.P. Jackson – Immortality or humanity—which one will win out in the end?

Romancing the Healer by Caitlin Ricci – In a deadly snowstorm a werewolf needs all the help she can get, and the werebear coming to her aid is more than she appears to be.

Midnight Kisses by L.J. Hamlin – A local witch, a new-to-town werewolf, and a mystery to be solved.

Like a Bell through the Night by Kayla Bashe – Guarding a faerie princess? All in a day’s work for a werewolf bodyguard. Avoiding falling in love with said princess? The hardest mission of Jaffa’s life.

The Imp in the Rock by Charli Coty – The cure for a bad breakup might be magic.

Smile Like You Mean It by Tay LaRoi – Ingrid meets a terrifying Japanese legend, but the stories are all wrong.

Thalia Darbonne left Port Lewis three years ago with no intention of returning. Despite being a powerful witch, she’s now known as a deserter – an outcast in the magical society. But after her mother’s untimely death, Thalia is called back to her hometown in order to fulfill her duty as matriarch, and take the place as head witch of the Darbonne Clan.

Being back home isn’t easy, especially when Thalia is confronted by a ghost from her past, the beautiful, dangerous necromancer, Jordan Wolfe.

As Thalia tries to cope with the loss of her mother, she’s also faced with her feelings for Jordan, the responsibility of becoming matriarch, and the strange, dark magic lingering between her and her first love. Thalia and Jordan fight through three years of confusion in the forest they grew up in, where trees whisper, the night sky bleeds, and sigils are carved into flesh.

After being bitten by her long-time girlfriend Robbin in werewolf form, Simone does the only thing she can think to do—she gets in her car and drives as far away as she can. As the first full moon since she was bitten approaches, Simone is faced with a difficult choice: does she trust Robbin, who wishes to guide her through her first transformation, after being hurt by her? And more importantly, with the full moon drawing near, does she really have a choice?

Dove in the Window by Kara Race-Moore

In 1930’s Appalachia, Cissy McGurk is still mourning the death of Pearl, her first love. However, Pearl shows up one night and crawls into bed with her, bemoaning that she can’t sleep. More and more people from the local cemetery are crawling from their graves because something won’t let them rest. Cissy has to find out how to fix it, even if that means asking Death himself for advice.

Bottom of the River by Samantha Kate

Anja Bauer is the daughter of rich but cruel parents who care little about her happiness. Despite her revulsion toward men, they plan to marry her off to a faraway suitor. But Anja’s discovers a contract they signed with the demon they’d warned her about, and she learns the true extent of their wickedness and the reality of the demon.

If You Want to Walk by Nicole Field

Chess runs into the world of the Fae to try to escape her depression, only to find it comes there with her. When she finds her way back, she knows she will have to leave many things behind. Is leaving worth that price?

A Tended Garden by J.P Jackson

Alyssa is a natural witch whose thoughts have a way of coming true. Her coven is the only one around—well, the only one she’ll practice her beliefs with – but her high priestess, Rachel, is particularly difficult to please.

Rachel has a secret she hasn’t told anyone in her coven—one that her ancestral witches before her kept from their covens too. If Rachel’s to hold on to her traditions and the immortality she’s been promised, she’ll have to keep the women in her coven returning to the sacred grove, and that includes Alyssa.

But secrets have a way of being revealed, and when Alyssa stumbles across Rachel’s violent and horrifying history with the trees of the grove, the pact between the sacred grove and Rachel’s family may have a price too steep to pay.

Romancing the Healer by Caitlin Ricci

When she takes too long to come back to her pack, Aria is caught up in a snowstorm. To make matters worse, she’s twisted her ankle while running. Hurt, freezing, and alone, her best chance for survival is to stay under an evergreen until the storm clears then try to limp back to her pack. Zoe has a better idea. She’s a healer without a pack to call her own, although she’s desperate for the kind of family Aria has with hers. Being trans, Zoe has never felt all that welcome with other shifters, but Aria promises to show her that there is at least one pack who would gladly have her. All they have to do is wait out the storm together.

A night out in a bar before a big council meeting to relax seems like a good idea, talking to the cute werewolf at the bar seems like a better idea. But when they meet again will sparks get in the way.

Like a Bell through the Night by Kayla Bashe

Rhiannon, faerie princess in exile, has been on the run for her entire life. Hunted by her most dangerous enemy yet, she turns to her childhood crush for help: immortal, smolderingly sexy werewolf Jaffa Volkovitch.

Jaffa’s scars and secrets haunt her, and she doesn’t let anyone get close. She remembers Rhiannon as an optimistic child… not an alluring, resilient young woman whose every touch awakens forgotten feelings. Keeping up her emotional barriers could mean breaking Rhiannon’s heart. What will Jaffa decide?

The Imp in the Rock by Charli Coty

Wendi Tamura turns to her favorite beach to calm her jangled nerves after she’s dumped by her cheating boyfriend. The water near her home on the Oregon Coast is never warm, and no place for a nude woman, so when one appears before her seemingly by magic, Wendi offers her help. It’s been years since she’s been with a woman, but when the beautiful Hanako reveals her true nature, Wendi doesn’t let either detail keep her from the most magical and steamy night she’s ever had.

Ingrid Smith, a young American living in Sendai, meets the cursed Slit-Mouthed Woman of Japanese folklore and does her best to rid herself of the woman. When a conflict reveals that Ayame isn’t as terrible as her legend says, she’s embarrassed by the truth and vows to haunt Ingrid until they can figure out how to lift the curse. For weeks Ingrid tries to lift Ayame’s curse, but with each passing day, she’s not sure she wants to.


If You Want to Walk by Nicole Field

Chess walked down streets far darker than she was used to. Outside, it looked like twilight, almost, except that where she was from, twilight had a finite end. This evening, she had been stuck in this half-lit world of the Fae as long as she’d been walking, and she’d been walking awhile.
This was the second time in two days she’d found and then walked these streets. They looked a little more familiar for that, but the lack of light was still disconcerting. It left her with an impression of eyes peeking out of dark corners, of sharp-clawed things creeping behind her. She didn’t know how. Some deep recess of her soul told her they would jump out to attack her if she ever gave in and turned to look around.
It was only her own force of will that had kept them from jumping out at her already.
On this excursion, only one thing was different from the last: the fact she instinctively knew she was being followed. Chess tried not to focus on that. If she did, she’d lose the last of her ability to navigate this landscape.
Coming to the end of the street, she wondered if there was actually more than one street in this place, or whether it was all just an illusion. Once she got to the end of it, did it just start up again?
Except, her feet would not take her another step forward. Chess tried, but the trying only did more to distress her. It was like in those dreams where she tried to take a step forward, but couldn’t, so she lifted her arms to fly instead. Chess wondered whether everyone had those dreams, or whether having those dreams had been a precursor to her coming here.
Her arms didn’t allow her to fly away now. As alien as this world was, it still remained too real to allow for that kind of fissure. A muted whimper passed her lips and, once again, she found herself regretting her decision to navigate this landscape on her own.
And then, one of them stepped out from their hiding place and strode over to her. Whatever held her in place did not hold them. For a moment, Chess could only stare in shock as they came within striking distance. Reaching out, they grabbed her by the upper arms so she had no choice but to look into their eyes. Their slanted, iridescent eyes that seemed made up of every colour found in an oil stain on earth.
Chess’s only other option was to look at their impossibly well-shaped chest, the only indication Chess had that this figure was a woman.
She’d never met anyone in her own world who was quite so androgynous in the face as Dancer. During their first meeting, they’d advised Chess they didn’t subscribe to humanity’s narrow view on gender. “We are both, and neither,” they’d told her simply, standing half a foot taller and staring down their blunt nose.
“You are all right,” they said to her now. “You are doing so much better than many would have expected.” Their voice was dual toned, but Chess had almost become used to that by now.
She didn’t feel she was doing better than expected. To tell the truth, she felt only weakness seeping into her. It was a side effect of the faerie’s touch on her skin, the silent promise that she didn’t need to worry now, that others would take care of her.
“Hey.” Those fingers came to rest under her chin. A caress Chess leaned into, despite all that had happened. “You don’t have to walk alone here.”
That she already knew, and it was what Chess was afraid of. 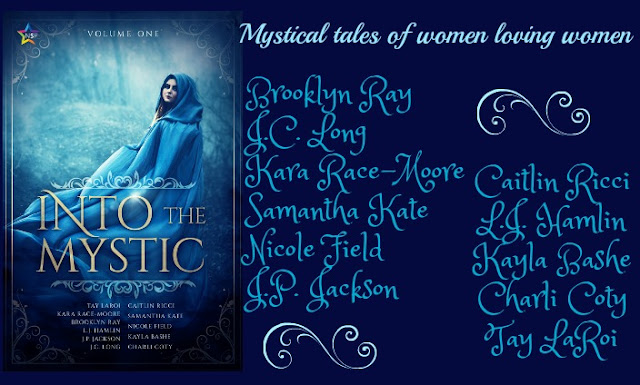