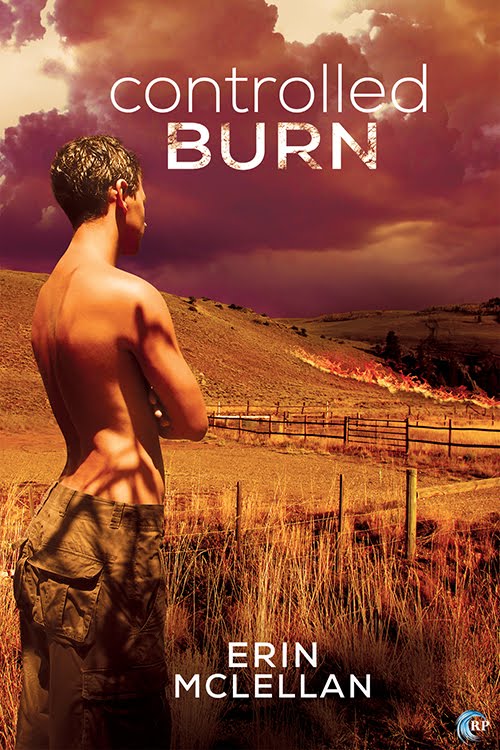 Hello! I’m Erin, and welcome to the blog tour for my m/m college romance, Controlled Burn! I can’t wait for you to meet Joel and Paulie, and hope you enjoy their romance as much as I enjoyed writing it.
Follow along as I stop off at several blogs throughout the week, and don’t forget to leave a comment for a chance to win a $25 Riptide Publishing gift card!

At eighteen, Joel Smith’s life fell to pieces. His boyfriend died in a car crash while reading a sext from him, the local newspaper outed them both in the aftermath, and his parents got a divorce. Joel did everything possible to outrun his past: he moved to Oklahoma for college, legally changed his name, and started over.

Since then, he hasn’t let anyone get close—not his classmates, not his roommate, and definitely not his hookups. The strategy has served him well for over three years. Why would he change it now?

But Joel doesn’t plan on the articles about his boyfriend’s death being used as a case study in one of his classes. And he doesn’t plan on Paulie McPherson, who is sweet and giving and fun. In Paulie, he finds a home for the first time in years.

But love isn’t simple, and lies have a tendency to get in the way. Joel must figure out if he’ll allow his grief to rule him, or if his connection with Paulie is worth letting all of his walls come tumbling down.

Erin McLellan writes contemporary romance, often set in the South or Midwest—particularly Oklahoma, Kansas, and Texas—with characters that are complex, good-hearted, and sometimes a little quirky. Erin likes her stories to have a sexy spark and a happily ever after.

Erin has a bachelor’s degree in creative writing from Oklahoma State University and a master’s degree in library and information studies from the University of Oklahoma. She has always enjoyed writing, but becoming a librarian and meeting enthusiastic romance readers helped her find her own writing passion. Now Erin cheerfully writes romance with characters across the LGBTQIA spectrum. A former public librarian, she still enjoys being surrounded by books and readers, but Erin hopes to find her stories on the shelves as well.

Originally from Oklahoma, she currently lives in Alaska with her husband, and spends her time dreaming up love stories set in the Great Plains. She is a lover of chocolate, college sports, antiquing, Dr Pepper, and binge-worthy TV shows.

To celebrate the release of Controlled Burn, one lucky winner will receive a $25 Riptide credit! Leave a comment with your contact info to enter the contest. Entries close at midnight, Eastern time, on August 19, 2017. Contest is NOT restricted to U.S. entries. Thanks for following the tour, and don’t forget to leave your contact info!