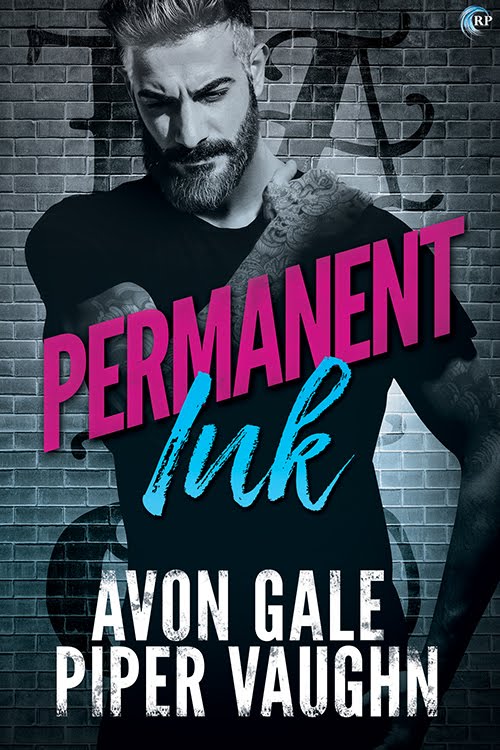 Hi! This is Piper Vaughn and Avon Gale and we're here today to talk about our sexy new contemporary romance, Permanent Ink, in which the worlds of street art and tattooing collide when a silver-fox tattoo artist falls for his much younger apprentice - who also happens to be his best friend's son.

At twenty-three, Poe Montgomery is going nowhere. He still lives in his father’s basement and spends most of his time tagging with his friends. When an arrest lands him in debt, Poe accepts the front desk job at Permanent Ink, the tattoo shop owned by his father’s best friend, Jericho McAslan. Jericho is nearly twice Poe’s age, but with his ink and prematurely graying hair, he quickly takes the starring role in Poe’s hottest fantasies.

Jericho is known for his ability to transform poorly designed tattoos into works of art, but he was once as aimless and misdirected as Poe. Wanting to pay it forward the way someone once did for him, Jericho makes Poe his apprentice and is determined to keep things strictly professional. Easier said than done when Poe makes his interest—and his daddy kink—abundantly clear.

Jericho can’t resist Poe or their intense chemistry for long. But between the age gap, tension with Poe’s father, and Poe’s best friend calling him a sellout, they’ll need to ensure they’re both on the same page before they can rewrite their rocky start into something permanent.

Permanent Ink is the first book in a new contemporary m/m series from authors Avon Gale and Piper Vaughn.

So the moment I heard that two of my favorite authors were writing a book with a sexy older tattoo artist and his best friend's rebellious son.. I wanted this book in my hands NOW!! Well it was seriously worth the wait starting with that sexy silver fox on the cover. Then, Poe and Jericho made the story engaging, because together these two lit the pages on fire!!

Poe is a stubborn, 23 year old who loves to push the boundaries with his graffiti art. He and his best friend, Blue, as Raven and Azure take way too many risks trying to one up other artists along with proving to themselves they can do bigger, better, and riskier pieces. Unfortunately Poe gets caught, and his dad reads him the riot act. Now let's face it though, Poe's Dad still loves his kid, and wants what's best for him. He mostly just wants Poe to grow up and face that graffiti art isn't going to pay the bills, and neither is working in a gas station. As Poe's dad is getting more ink done, his friend Jericho offers to let Poe attempt to work and learn their reception desk. Ultimately this may lead to an apprenticeship for Poe depending on his attitude and work ethic.

The one thing that Jericho doesn't share with Poe's dad is how attracted he is to Poe, hell he doesn't even share that with Poe. Not until Poe wears him down to the point that Jericho gives in to his attraction. I'll admit that I'm not usually a fan of Daddy Kink because it can sometimes walk a very fine line between seriously sexy and borderline gross.  This was on the completely sexy, hot, and needs a cold shower afterward side of that kink. I loved that Poe stuck to it and gradually wore Jericho down on his feelings. He was a persistent little shit, in more ways that one, too.  I also loved seeing Poe grow from a semi-petulant young adult to someone that values both other's opinions and his own showing how strong he is. I also loved that Poe's dad took his and Jericho's relationship well and didn't blow a gasket or end up hating on both of them. I kind of really hope that there is a story down the line for Poe's dad, too.

Permanent Ink was everything that I'd expected and wanted in a story from these two authors. Both have always excelled at characters who don't always fit the traditional mold in relationships. They crafted a well written story with fantastic characters who exhibited a lot of personal, interpersonal, and couple-style growth. I do know that they are working on a second book in the series and I can't wait to see who they have up next for our reading pleasure.

I highly recommend this book and both of these authors because they consistently bring fantastic stories to life.

Piper Vaughn wrote her first love story at eleven and never looked back. Since then, she’s known that writing in some form was exactly what she wanted to do. A reader at the core, Piper loves nothing more than getting lost in a great book—fantasy, young adult, romance, sci-fi, she loves them all (and has an over-two-thousand-book library to prove it!). She’s an avid tea drinker, a hockey fanatic, a vintage typewriter collector, and loves to travel so much she has “wanderlust” tattooed on her ankle and dozens of countries on her bucket list. Recently, she discovered the world of nail art and realized she’s pretty handy with a paintbrush—as long as it’s a miniature one.

As a bisexual and Latinx person, Piper takes great pride in her heritage. She grew up in an ethnically diverse neighborhood and strives to put faces and characters of every ethnicity in her stories, so her fictional worlds are as colorful as the real one. She currently resides in the suburbs of Chicago with her husband, son, and a cat that has Piper wrapped around her little paw. Above all, she believes that everyone needs a little true love in their life … even if it’s only in a book.

To celebrate the release of Permanent Ink, one lucky winner will receive a $20 Amazon gift card and a “Poe” coffee mug! Leave a comment with your contact info to enter the contest. Entries close at midnight, Eastern time, on August 12, 2017. Contest is NOT restricted to U.S. entries.

Thanks for following the tour, and don’t forget to leave your contact info!