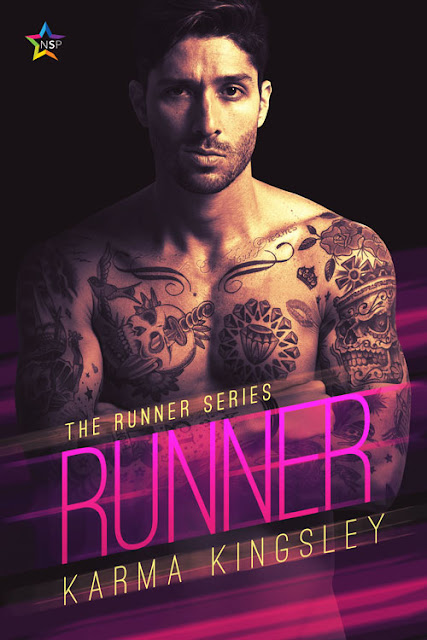 Alex Banez is a runner for a Los Angeles film set. When he has a chance encounter with executive producer Atwell Richards, he finds himself falling fast and hard. Atwell is rich, powerful, gorgeous, and everything Alex never thought he would have. But Atwell also has a dark side and an inflexible need for control that threatens to suffocate everyone around him. Alex has to figure out if he can love Atwell without losing himself.

“Dammit. Son of a…” Alex shook out his hand, holding back a curse as he blew a puff of cool air onto his burning fingers. The skin on his knuckles reddened and sizzled, and he clenched his jaw as he waited for the pain to subside. Goddamn new directors and their tea fetishes. He’d burned himself nearly a thousand times since the new management team had taken over the set. He was certain his hands were merely bone and burn marks, as the last of his skin had certainly just sizzled off.

Taking a deep breath, he carefully placed the scalding hot cup of Orange Jasmine onto a tray with two others, both varying pretentious flavors of tea. His new bosses from Maryland, flown in to save the current film from going up in flames, had a particular palate for teas.

Alex had thought they were joking when they requested that he place an order for the list of nearly fifty different flavors of the beverage, but the cold, sharp looks from his collection of recently arrived employers had quickly assured him that being a “tea connoisseur” was no laughing matter. He’d nodded in obedience and quickly hopped on the task, having to call in nearly every favor owed to him for the more exotic brands. He’d thought that was the hard part, until they had taken to requesting that he deliver them a new flavor of burning hot tea on the hour. In addition to the other millions of tasks he had to complete, he now had a timer attached to his waist, set to beep every fifty minutes and remind him to hydrate the arrogant devils that controlled his paycheck.

He picked the tray of mugs up and balanced it on his palm, keeping it steady with the light touch of his other hand. He plastered on a smile and moved forward toward the three men sitting confidently in chairs labeled with their individual titles. None of them mattered. They all outranked him.

“Oh, the tea is here,” one of them exclaimed, turning in his chair to reach back for one of the glasses.

Alex opened his mouth to warn him that he was taking the wrong glass. He’d arranged them in the order that they sat, so as not to forget who ordered what, but his effort was futile as the man brought the cup to his lips. He took a sip and immediately spit it back into the cup.

“Is this Pomegranate Raspberry?” he asked angrily.

“Uh, yes. But it wasn’t—” Alex started to answer but was quickly cut off.

The man stood up from his chair. He wasn’t an intimidating man. His features were light, his hair platinum blond, and he was barely half Alex’s size, but he was obviously used to having power and money and thought that his size was more threatening than it actually was. His gaze burned furiously into Alex. “I specifically asked for Red Velvet. Did you think that I wouldn’t taste the difference? Do you think that I’m an idiot?”

Alex stared back at him openmouthed. He had no words. He wasn’t even sure how the two questions correlated. He would never be able to taste the difference between any flavor of tea, ever, and he certainly didn’t think himself an idiot. “Well, it’s just—”

Alex stood frozen, still staring at him, and mortified by his outburst.

“I said go, before I find your replacement. Hopefully, one that can read the label on a bag of tea.” The man waved him off as his two companions watched silently. Alex gathered himself. He closed his mouth and turned to leave them to bitch about him and his incompetence. He clenched his teeth together. If you want to be in one of those director chairs one day, then you better damn well keep it together, he reminded himself. He was the set’s bitch boy for now but one day, he’d be running the show. One day soon.

I've got some fairly large life decisions to make soon, so I went camping in search of my path. Sort of like a peyote in the desert kind of thing...but I have no idea where you get peyote and we don't have any deserts around, so it was more like a dime bag and a 12 pack at Lake Tobesofkee, which is sufficient. It all boils down to the same thing in the long run.

Anyways, so we went camping and it was kind of awful. As much as I'm all about saving nature, I'm not really about being submerged in it. I'll recycle and take note of my carbon footprint but life in a tent is just not for me.

First, the bugs. They're everywhere! And not just like little baby bugs, the bugs in foreal time nature are some big, ruthless mother truckers.

Second, the dirt. Also friggin everywhere! And I say to my dear companions, "Don't walk in the tent with your shoes." Which, I feel like shouldn't have to be something you have to tell someone, but whatever, I digress. But of course when I say "don't wear shoes in the tent", they hear "don't wear shoes at all." So everyone's walking around in nature barefoot and then walking straight into the tent, so it's still a dirt filled tent because apparently the no shoes in the tent concept was over everyone's head.

But it wasn't all bad. I did enjoy the food and the fire...of course, I could not be part of starting the fire. I have very big, very natural hair the requires a very lot of product. I wouldn't even stand too close to a heat lamp just for my own personal safety, and by the time we got to lighting the fire I was a good six or seven drinks in, so I was probably the most flammable thing in the woods.

That aside, once the sun went down and we had the shield of the smoke from the bugs and I had the buzz of all buzzes, camping wasn't all that bad. Would I do it again? Probably not. But, I do feel enlightened. Itchy, but enlightened.

Karma is a wine-enthusiast, feminist, activist, humanitarian, vegetarian and just all around liberal and that often seeps into her writing. She loves any place with white, white sand and blue, blue water and an endless supply of prefix-mo drinks (Moscato, Mojito, etc.).