Ghost by J.M. Dabney - Blog Tour with Review and Giveaway 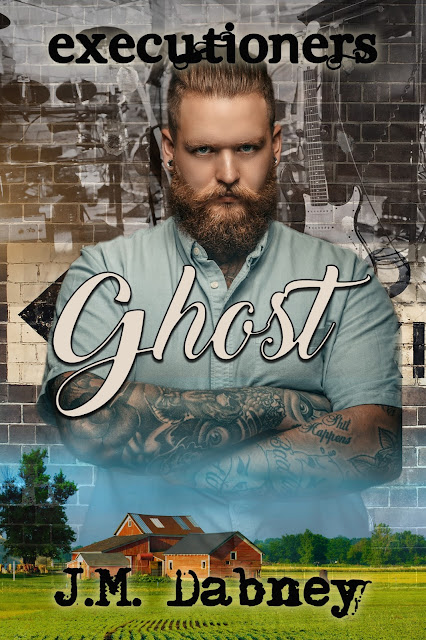 Gideon Jane earned the name Ghost for his reclusive nature when he joined a group of guys in Powers, Georgia in a band called Executioners. It had been his way of settling into small town life after living in New York for the past twenty years. He loved the band and his small organic farm. What he didn’t love was being single, but it appeared it was his new reality. He didn’t want his ex back, although he did want something. What that was eluded him until the evening he walked into Nightingale’s Books.

Small town girl Harper Sage knew pain, and she’d lived with it—she had the scars both mental and physical to prove it. It would’ve been easier to hop in her car to find safety and anonymity, but Harper stayed to prove she was stronger than hurled fists and bruising prejudice. She found herself within the safety of a close-knit group of rough bikers and bar bouncers. That didn’t mean it was all perfect.

What’s a girl to do when she craves normalcy and acceptance: she just smiles. Choices are made, some with dire consequences and others that bring her closer to her dream. Will she make the right decision or finally discover escape is her best option?

Ghost is the first book in the Executioners series which is a continuation/spin off of this author's previous series Twirled World Ink, and Brawlers.  While this story could be read as a standalone, I highly recommend reading the previous series in order up to this book because many of the characters make appearances and reference events that have happened in previous books. Plus, really...can you pass up a horde of bearded, inked men with attitudes and their love interests? I know I couldn't because this author is an auto-buy for me now even before Ghost was released.

I have been anticipating Ghost since I'd heard that the author was writing Harper's story. Let me tell you...it did NOT disappoint nor did it sell the character short. This book was, to me, absolutely perfect and told the best possible story for Harper and Gideon. It was sweet, and tender, yet heartbreaking in so many parts which is exactly who Harper is both inside and out. She's had such a rough road to travel and by the time she meets Gideon, she's wary but still able to be amazed that someone like Gideon exists. And, no.. it's not the magical penis effect of so many storylines. It's that so many of the people she's met before Gideon weren't able, or willing to really SEE Harper and who she really is and more importantly how much of herself she was hiding inside.

Yes, I'm gushing just a little bit about Ghost. The conflict between Harper's life in this small town is not idyllic but the moments she has with Gideon give her a touch of magic and tenderness she hasn't had in her life.  That for me made this book one I couldn't put down and pretty much read in one sitting, and it will also be one that I pick up to re-read again because of the characters and the storyline. I know I'm not giving you any hints to the storyline because there are so many things that need to be read/experienced first hand in Ghost. It's just that kind of book that a reader needs to form their own impressions and thoughts over because really this book will be different things for different readers. I know.. again vague but it really is just that type of story.

There are a few trigger warnings that the author shares in the blurb for Ghost and they are on scene  and also part of the backstory for Harper. Again though, this isn't a book that you should miss because Harper and Gideon a just pretty damn awesome characters, and their story is sweet and tender and yes filled with that touch of relationship magic that gives you the warm fuzzies.

Snag this book ASAP and your favorite place to read, settle down because you're in for a one-sitter once you start!