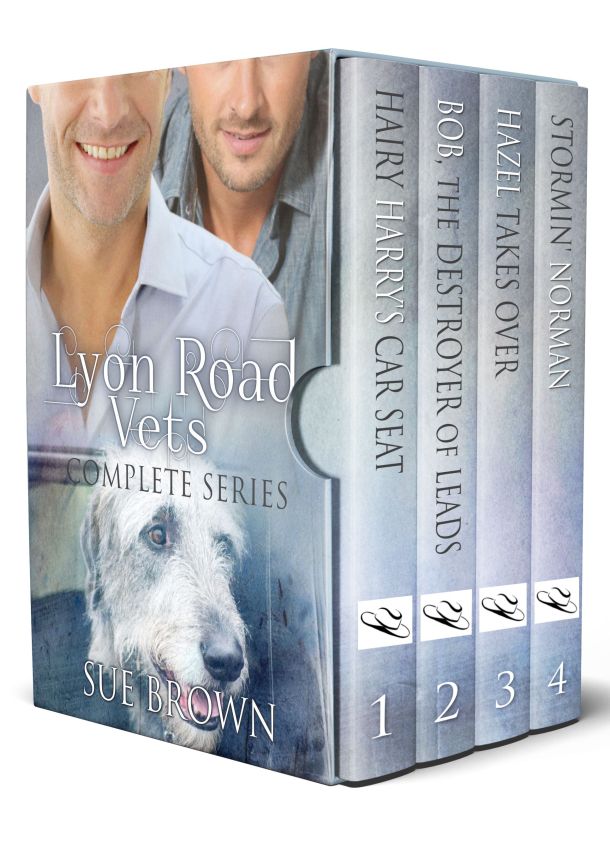 Overall Heat Rating for the series 🔥🔥🔥

Peter and Evan, Will and Lawrence, Jesse and Dan, friends and neighbours with one thing in common; the love of their dogs.

As Peter mourns the loss of Harry, Evan brings a lively puppy into their lives, who takes over their home and hearts. Will’s young beagle, Bob, hasn’t met a trainer he can’t break. Is Lawrence the exception? Dan walks away from Jesse after too many broken promises. Will Jesse’s puppy, Norman, manage to bring them back together?

Peter Mitchell walked away with from his marriage with two things: a suitcase and Hairy Harry, the family pet.

When Harry becomes ill, Peter is faced with one of the hardest decisions he's ever had to make... saying goodbye to his best friend.

Evan Wells is the locum vet who attends to Harry and Peter is surprised at how quickly they become friends. Peter finds himself looking forward to Evan's nightly phone calls and the meals they share together. He knows Evan is gay but it doesn't bother him until Evan confesses his attraction to him. Peter has to admit to himself that he's not as adverse to the possibility as he thought he would be, and that does bother him.

Just before eight o’clock, Evan walked in with two bags from the local Chinese takeaway.

Peter eyed them with amusement. “Two bags? How many people are we expecting?”

“Ha ha. I can take whatever is left over for dinner tomorrow as you’re not feeding me.”

“You could always cook for yourself,” Peter pointed out drily.

After two weeks Evan had a small stock of recipes to try at home.

“What would be the fun in that when there’s a perfectly good Chinese in the fridge? Is one of those for me?” Evan held his hand out for one of the beers Peter clutched to his chest.

“No, I’m going to drink both and leave you to go thirsty.”

Peter pretended to drink from one of the bottles, although the cap was still on. The next thing he knew he was pinned against the fridge, still holding the bottles above his head, and staring up into fierce charcoal-dark eyes.

“I—” Peter stopped, his mouth dry. Evan’s body pressed into every inch of him.

“I want my beer,” Evan growled.

Every nerve in Peter was tingling. He couldn’t help his reaction to feel of Evan forcing him against the fridge door. And the growl. Jesus. The growl washot. Peter’s heart pounded, knowing he was hard, and he felt an answering hardness against his belly. He wanted to push against Evan’s arousal, to relieve the ache.

Evan stepped away from him so quickly Peter almost dropped the beer bottles. “I… Fuck, I’m sorry, Pete.”

Peter thrust a bottle at him. “Here.”

Evan fumbled with the bottle opener, the lid flicking onto the floor. Peter watched as he virtually downed the contents in one go.

“Better?” At some point Peter was going to be able to manage more than one word sentences.

“Yeah.” Evan wiped his mouth with the back of his hand. “No. I’m really sorry. I didn’t mean to scare you.”

“No. Well, more shocked. I’m not used to being manhandled.”

He probably didn’t but that was okay. Peter wasn’t sure he understood himself. All he knew was that Evan’s manoeuvre had left him breathless, and he wasn’t sure why.

Bob, the Destroyer of Leads #2

Bob, a beagle with a very bad attitude. He eats through every lead purchased by his despairing owner, Will Duffy. One moment he is walking to heel, the next he is a free dog, triumphantly tearing down the road with Will chasing after him.


It's a great game for Bob until the day he breaks through lead number ten and is hit by Lawrence Taylor's car as he runs across the road, leaving Bob unconscious and his back leg broken. Will has to ask Lawrence for a lift to the vets, and endure the man's scolding all the way there. Even worse, Will discovers Lawrence is a dog trainer!


Bob ends up in a cast and is forced to wear the cone of shame. Of course, Lawrence thinks all Bob and Will need are dog training classes, except Bob hasn't met a trainer yet he couldn't break. Is Lawrence man enough for the job?


Excerpt - Bob, the Destroyer of Leads

Will looked over his shoulder to see Lawrence jogging towards him. “Hi, what are you doing here?”

“Waiting for you, obviously. I thought you got out at five.”

Will bridled at Lawrence’s snappish tone. “I don’t see what it’s got to do with you when I leave work.”

Lawrence took a deep breath. “I’m sorry I snapped. When you didn’t come out I was worried I’d missed you.”

Knowing that it was partly his fault for being rude, Will nodded. “Text me next time and I’ll leave earlier.”

“Sure, come on.” Lawrence led the way back to his car. “I finished my client early and thought you’d appreciate the lift.”

“I thought you ran dog training classes,” Will said as he strapped on his seat belt.

“I do, but I take on private clients too. Some dogs don’t react well in a group situation.”

“Do you make a good living from training dogs?”

Lawrence nodded. “Good enough. I don’t need a lot to get by.”

“And you want to train Bob?”

“If I say yes, will that start another argument?” Lawrence asked cautiously.

Will snorted. “Three days ago I’d have said yes, but after watching Bob run out into the road, I think I need your help.”

“Good. I’m really pleased to hear you say that.”

“Of course, Bob will eat you alive.”

Lawrence snorted. “What did you say? You’d never met a trainer that Bob couldn’t break?”

“He has that reputation,” Will said. “He’s been banned from three dog training classes, and the other two suggested Bob might be happier somewhere else.”

“He seems quite placid and friendly at the moment.”

“I don’t think he’s got over the anaesthetic. He is never this quiet.” Will missed ‘his’ Bob. This quiet dog wasn’t the same.


After the death of his beloved dog, Harry, Peter Mitchell refuses to consider getting a new dog. Besides which, Peter has his hands full with his partner, Dr Evan Wells. The vet is surprisingly sensitive about Peter’s feelings and doesn’t nag Peter about getting a pet. Of course, not nagging and not doing anything about it are two different things, at least in Evan’s mind.


When Peter is presented with a small red bundle of fur to hold, he realises the devious vet planned their new arrival and worse, she’s already got a name. Peter may not have a choice about their dog, but he’s going to put his foot down over her name. He should know better.

Peter awoke, overheated, stifled, and trapped on both sides. Evan was wrapped around him as usual; the man was a human teddy bear. This time he’d managed to pin Peter to the bed so he couldn’t move at all. Peter stayed where he was, not bothering to open his eyes as he dozed contently until the call of nature became too great. Half-heartedly and still with his eyes closed, Peter wriggled to free himself, and received a grumble in both ears.

He frowned. Evan was his superman but even he couldn’t manage stereo conversation. Neither did he have a wet nose. Peter cracked open one eye, to find as he expected Evan was spooned up behind him, still whuffing gently as he slept. Bright eyes and a huge smile greeted him instead.

“How did you get here, trouble?” he asked, stroking Hazel’s back.

“Hmmm? Haven’t had time to get into trouble yet,” Evan muttered.

Peter tilted his head to look Evan. He had to give the man credit for being a good actor. He looked genuinely surprised to see Hazel lying on the bed. “I wonder,” he said drily. “It’s amazing how she managed to open the kitchen door, climb the stairs and get on the bed.”

Dan had been Jesse’s partner for many years, and always there for Jesse on his return from difficult assignments. However, after breaking his promise not to leave again, Jesse learns to his cost that Dan can be pushed too far. When he returns home, broken in body and spirit, Jesse finds his house empty and Dan in the arms of someone else.

To fill his life, Jesse decides to get a dog. His friends and neighbours take him to choose a puppy. What he doesn’t expect is for Norman to choose him. As Jesse takes on a new job, with Norman’s assistance, he realises that Dan isn’t far away, and he still loves him. Dan has moved on with his life. Can Jesse do the same?

The barman gossiped about the recent gas explosion in the pub down the road Jesse listened with half his attention, keeping an eye on the dark-haired bloke in the corner.

The man didn’t disappoint. As soon as Jesse had his beer, he came over and sat on the bar stool next to Jesse. To give him credit, he didn’t piss about.

Jesse assessed him carefully. He was older than he’d appeared in the shadows—early forties maybe, the start of lines around his eyes and a sprinkle of grey at his temples. Not Jesse’s type. Jesse was in his mid-thirties. He usually went for men younger than him, searching for uncomplicated hook-ups and nothing more.

“Hi.” Jesse didn’t say any more, hoping his off-hand tone would tell the guy he was wasting his time.

Dan ordered another beer and turned back to him. “I haven’t seen you in here before.”

“Do you want a beer, a chat, and then see what happens?”

His approach caught Jesse’s attention. Normally blokes started off with “Do you wanna fuck me?” Nine times out of ten Jesse said no.

Dan blinked. “I asked you for a beer, not a ring.”

Jesse shrugged. “You’re older than me. I thought I’d get that off the table.”

“Thanks,” Dan said drily. “So all older men are desperate for a ring and kids. I’ll remember that next time I ask for a hook-up. I’ll only go for the younger twinks.” He got up and smiled sadly at Jesse. “Sometimes a beer is just a beer.”

Dan walked back to where he’d been sitting.

“Dan. He’s decent and he’s not looking for anything from you.”

Sean nodded as he wiped the bar down. “He’s a great bloke. A little shy. He comes in here most days for lunch. It would have taken a lot of courage for him to talk to you. You could have just said no.”

Cranky middle-aged author with an addiction for coffee, and a passion for romancing two guys. I love my dogs, I love my kids, and I love coffee; in which order very much depends on the time of day.

Enter the Rafflecopter Giveaway for a chance to win a $15 Amazon gift card.