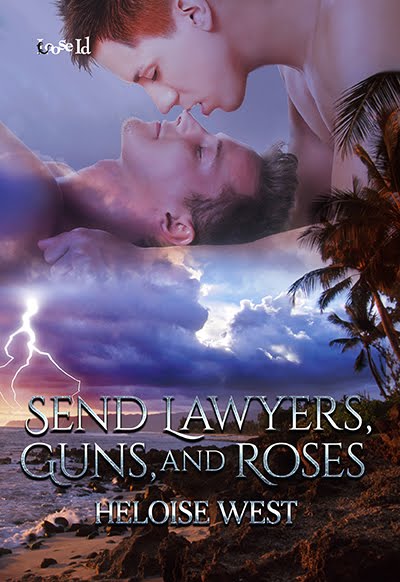 When Hunter and Alex are given the vacation of a lifetime, it’s a chance for them to pay attention to romance and get out of the path of danger. The tiny Caribbean island of Saba is gorgeous, the first to have marriage equality, and the Sabans are the nicest people on earth.

There’s lots of rum poolside for relaxing and a room with a mirror on the ceiling for passion. Hot karaoke nights, cold beer, and new friends.

But their new friends Orfeo and Max, and Max’s sister Talisha, share a troubling secret. Alex and Hunter want to help. As a hurricane bears down on them, a dead body surfaces, and a purple backpack loaded with stolen jewels leads a pair of dangerous men to the island.

Alex would rather poke his own eyes out with a pointy stick than call on his old enemy Nick Truman for help; he’d also do anything to keep Hunter out of danger. But even his nemesis can’t reach them now.

Once again, they only have each other to depend on as their paradise is about to become hell on earth.

Excerpt:
“Ready? Take the beach bag. I’ll grab the chairs,” Alex said. “Did you get enough to eat?”
“Yeah. What’s the time?” Hunter slung the bag over his shoulder.
Alex shrugged. “Who cares? Have a cocktail. You know, to hydrate and pace yourself for a long day in the sun.”
“Let’s set up camp. Maybe a nap first.”
Their bare feet slapped against the sun-bleached boards of the footbridge, some of the flowering rainforest clinging to its edges for the hundred or so feet from the breakfast patio to the pool. The beach chairs were striped canvas and wood, chaise-style. Alex had grabbed a matching umbrella for when the sun was directly overhead. He left it closed, as they had a few hours yet before noon, by the arc of the sun in the unbelievably blue sky. The poolside held a half dozen chaise lounges and couples of various ages. They returned languorous, sun-soaked greetings in English, Dutch, and French as Alex led them to a spot he deemed worthy for their day in the sun. When the chairs were side by side, the canvas beach bag between them, Hunter sighed with pleasure, though he was soaked with sweat. He pulled off his T-shirt. “Do you want to swim first?”
“I’m dying to.” With a wicked grin, Alex slid his shorts down, the T-shirt hem falling to below his hips.
“Tell me you didn’t get a thing-thong!” God, they’d laughed together at the online models wearing bathing suits with pockets for their cocks.
Alex laughed. “No, a Speedo. For you.” He shrugged out of his T-shirt with an elegant, mouth-watering play of muscles and skin, and some of the lounging women whistled and clapped for the navy-and-white-striped Speedo he revealed. Hunter mock-growled and reached out to grab Alex, but he dashed away and ran along the side of the pool, blond hair streaming, long, muscular legs eating up the distance to the deep end. He dived like a happy dolphin into the water. Hunter ran after him and followed with a hurried, sloppy dive, shocked at the sensation of water as warm as bathwater. He wanted to melt into it. When he came up for air, hands beneath the water gripped his calves, and he grabbed a breath before Alex yanked him under. They wrestled briefly, then surfaced.
“Fantastic!” Alex shook his head briskly to whip the water from his hair.
Hunter shoved him, threw himself on top of him, and they went under again.
When they surfaced, Alex said, “We can rent a sailboat. Or a rowboat and paddle around in the bay. Or fish if you want. Do you think your leg will hold up to snorkeling?”
“Snorkeling, maybe even scuba.” He’d swim to the moon to keep Alex happy.
“I was born underwater,” Alex said, surprising him. “I even had those infant swim lessons.”
“You’re a natural,” Hunter replied. “Aqua Boy.”
Alex shoved him again; Hunter let himself fall backward into the water with a huge splash.
They swam for a while, joined by the other sunbathers when the heat got too intense. Hunter pulled himself from the pool and sat on the edge, watching Alex do laps. He shaded his eyes against the fierce touch of the sun. It pressed against his skin despite the water-resistant sunblock, and he splashed water up and down his arms, chest, and neck to cool off. Maybe he should have gone tanning like Alex had, because it hurt to touch his skin already. The water reflected and intensified the sun. He wasn’t that kind of redhead, but the tropical sun made him feel like one. Tanning had seemed kind of frou-frou…not for him…but he didn’t want to look like a strip of bacon at the end of the day either. Sucked it up and endured the tanning bed.
Alex swam over and pulled his gorgeous body out of the pool to sit on the edge beside Hunter. “I’m ready for some reading and napping. Lunch buffet is open until four… What are you laughing at?”
“We must be on vacation if we’re planning the day around the next meal.”
Alex smiled. “It’s about ten now. We can eat something light at eleven when they open.” He leaned in close. “If we go up to the room by noon, we’ll have time to screw our brains out until about two and have lunch again.”
Hunter nodded. It was all he could do.
“So it’s not meal times we’re planning for, right?” The sparkle in Alex’s eyes wasn’t about ham sandwiches and fruit salad. “Did you see the awesome mirror on the ceiling?”

Hi Heloise, thank you for agreeing to this interview. Tell us a little about yourself, your background, and your current book.

Heart and Haven is a series concept born of the first novel Hitting Black Ice. Love on the run, romantic suspense as danger tightens around the two main characters. Once Alex and Hunter begin to recover from the trauma in the first novel, they find that the repercussions from the past still have a hold on them. The gift of a vacation in the Caribbean is meant to bring them together so they can do more romancing and relaxing in safety. I love the movie Key Largo and took inspiration from that for the story.

My background? Reader, English major, writer. I’m boring. I garden, live with cats and boyfriend in northern New England, and work in Healthcare. All the action and excitement is in my head.

1)   Tell us something about your character’s friends.

In Send Lawyers, Guns, and Roses, it’s Alex and Hunter’s new friends and the secret they share that puts everyone in danger. Orfeo, from Jamaica, manages a ska band. Through music he met the tormented Max and his sister Talisha, who were on the run from Max’s evil ex Derek when Orfeo me them. They are still running in Send Lawyers, Guns, and Roses, but the hurricane has slowed them down. Hopefully, it will slow down Derek, too.

My characters are pretty active so they like to eat. In Send Lawyers, Guns, and Roses, a conversation about eating vegetarian comes up. Alex’s mothers eat quite a bit like Orfeo, who teaches yoga and practices tantra. Alex grew up vegetarian but gave it up when he was on the run. He never got back to that lifestyle, but Orfeo revives an interest for him. Hunter, however, is far more interested in tantra ;)

3)  What activity does your character absolutely hate?

Hunter comes from a law enforcement family and works in the ER, so he sees the damage first hand. He’s been a victim of domestic violence, and he hates feeling helpless.

4)   What is the most difficult part of writing for you?

Fighting both time and self doubt. Man, the nightmares I’ve been having about this release are ridiculous, but it’s been a while since Hitting Black Ice.

5)  What’s your favorite decade and why?

Heloise West, when not hunched over the keyboard plotting love and mayhem, dreams about moving to a villa in Tuscany. She loves history, mysteries, and romance of all flavors. She travels and gardens with her partner of 10 years, and their home overflows with books, cats, art, and red wine. 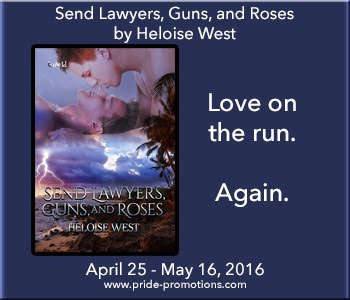 Rafflecopter Prize: Win one of three e-copies of ‘Send Lawyers, Guns, and Roses’