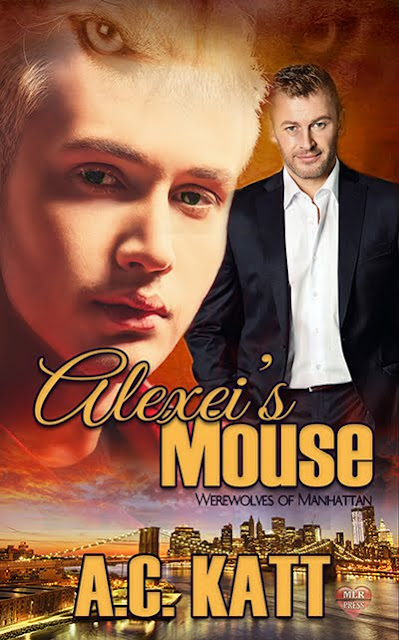 Alexei Davidoff suffered three years in a Russian labor camp where he was tortured and defiled daily. Alexei knows suffering on an intimate basis. He’s rescued by Armand and Etienne members of the North American Council of werewolves. His household came with him from Russia and all of them are worried that Alexei will go back and challenge both the government and the Russian First.

Then early one morning Alexei goes jogging in Central Park in an effort to get back his strength to fight the Russian First. He finds a prostitute on a park bench covered in newspaper and not moving. Bearing in mind his recent ordeal Alexei decides to help the boy. He lifts up the newspaper and finds a needle hanging out of his arm. The boy is dying of an overdose and he’s Alexei’s Mate.

Ominous dark gray clouds rolled in. Snow came down as small ice pellets that cut like glass shards on the skin. They swirled around the mourners as they stood over the twin coffins. A northeast wind blew over the loup garou cemetery outside of Moscow. It cut through the thickest coats and scarves. Alexei Davidoff shivered in his beaver coat and hat. His Enforcers lowered the bodies of his former Chief Beta and his Beta’s Mate into the ground. Newly joined, they were dead for the crime of being gay and holding hands in a public square in Moscow.
“This cannot stand. There has to be an answer to this, someone has to stand up against these thugs.” Alexei moved his platinum hair off his face. His navy blue eyes flashed both anguish and resolve.
“The perpetrators were human, one of the government’s army of gay bashers, Alpha. There is nothing we can do. We cannot harm a human, and the government gives us no recourse to law.” The Beta shook his head.
“When is the next protest?” Alexei paced across the icy ground in front of the graves.
“Tomorrow at noon, in the square,” Vasily Yudin, Alexei’s new Chief Beta said reluctantly.
“I will be there.” Alexei watched Vasily’s expression. His body folded in on itself in resignation. Alexei knew Vasily realized it was useless to argue. He saw that his Alpha had made up his mind. Alexei could tell his Betas were scheming to mitigate the damage.
“We’ll go with you, Alpha.” Vasily gestured to Grigory and the six Enforcers in the funeral party.
“No, I will go alone.” Alexei clenched his fists and set his jaw in defiance.
“Alpha, it’s dangerous. We can’t let you go alone. If the FSB picks you up, there is no guarantee that the council will be able to negotiate your release. Please, both Grigory and I think you should let us and the Enforcers go with you, or you should stay at home. The FSB under the current president is worse than the KGB that preceded them. Peter and Sasha wouldn’t have wanted you to put yourself in danger. There is no helping them now.”
“I cannot let this go unanswered, Vasily. The man who did this wasn’t even arrested despite the fact that I reported the assault. I must protest to the authorities. We have an obligation to try to right this wrong. He was one of mine, one of my household, my personal staff. I am responsible.”
“But, Alpha, we can’t let you go alone into a dangerous situation,” Grigory persisted. “We would be shirking our duty as your Betas if we let you go alone.”
Alexei Ivanovich Davidoff straightened his spine and spat. “I will lose no one else to the government. As your Alpha, I am ordering you to stay away.”
“Alpha,” Vasily got on his knees in supplication.
Alexei put up his hand to silence his Beta. “I will hear no more of this. I will lead the demonstration tomorrow.”
Vasily and Grigory hung their heads in defeat.
* * *
March
Three Years Later

AC Katt was born in New York City’s Greenwich Village. She remembers sitting at the fountain in Washington Square Park listening to folk music while they passed the hat.  At nine, her parents dragged her to New Jersey where she grew up, married and raised four children and became a voracious reader of romantic fiction. At one time she owned over two thousand novels, until she and her husband took themselves and the cat to New Mexico for their health and its great beauty.

Now, most of AC’s books are electronic (although she still keeps six bookcases of hardcovers), so she never has to give away another book. AC is a late bloomer, however, she claims to have found her niche writing LGBT romance.

She hangs out at ACKatt.com and ackattsjournal.com; where she keeps her blog.  To get snippets of new releases and Works in Progress subscribe to AC Katt’s Kattery by sending an e-mail to mlhansel@gmail.com. 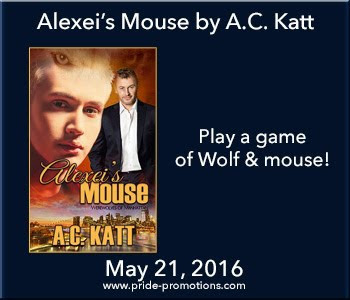 Rafflecopter Prize: First FOUR books of the Werewolves of Manhattan by A.C. Katt