The Harvest Young: Bound By Fate by M.A. Church - Book Blitz with Giveaway 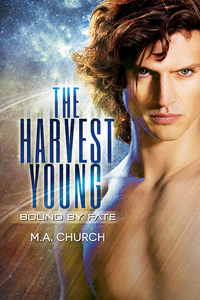 Half human and half Tah’Narian, Szin doesn’t fit with either race. His appearance is mainly human, but he’s able to have a young. Unfortunately, that’s his only Tah’Narian characteristic. He’s smaller and weaker than other young.

Szin’s eighteenth birthday has passed and time’s running out. He has to stop his childhood friend, Takeo, from making the worst mistake of his life: claiming Szin as a mate. Takeo deserves an equal who’s as fierce as he is, something Szin most certainly is not.

Since before Takeo was born, he’s known Szin was his. Nothing and no one, not even Szin, is going to stand in the way of claiming his mate. He understands Szin feels he isn’t good enough, and he’ll do anything to convince Szin otherwise. Including taking drastic measures to ensure his mate listens.

Takeo is the ultimate blend of human, Tah’Narian, and Onfrevian DNA. He’s pure predator, and his sights are set on his mate.

Takeo swatted Szin’s ass. “You don’t give the orders here.”

“How’s this, then? Either get me on my feet, or I’m liable to throw up all down the back of you. Not kidding here.”

A rumbling, ominous noise sounded, one Takeo wasn’t sure a body was supposed to make. That got his attention. Without hesitation he set Szin back on his feet. Szin turned green, and Takeo quickly grabbed Szin’s wrist and rubbed a spot on it.

“Yeah, much. Neat little trick. I really thought I was going to spew.”

Takeo frowned. Szin was trembling and pale. A simple stun shouldn’t have done that, nor should have what he injected Szin with. “What did you eat last?”

“Um, I think….” Szin rubbed his forehead. “Icing off the birthday cake right before I went to bed.”

Takeo wanted to shake Szin. “Do you mean to tell me that after two big slices—with loads of that homemade ice cream your dad made—you were eating icing straight? No wonder you feel nauseated.”

Szin glared at Takeo. “Yeah, it couldn’t have anything to do with being stunned, then injected with something to knock me out, right? No possible connection there.”