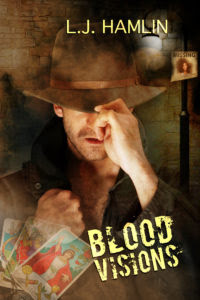 Private detective Ronan Bayne is a former cop who now runs his own agency specializing in all things paranormal. After several women have gone missing, Ronan gets called in by the police chief. Dustin McPherson is a psychic who’s worked with the police in the past. After having a vision of one of the missing women, he meets Ronan. Together, they must solve a case more complicated than either of them expected.

It was too real to just be one of his nightmares. Dustin had learned to tell the difference between his dreams and a vision while he was asleep by the age of twelve, and he is twenty-one now. Dustin sits up in bed carefully, his head swimming a little, his ears still ringing with the girl’s heart-wrenching sobs.

He gets out of bed and goes to the bathroom. He takes some Tylenol out of the cabinet and washes it down with a glass of water. He hopes that will help with his headache, and he won’t have to take the tramadol his doctor has given him.

Dustin looks at himself in the mirror above his sink. He looks pale even for him, and sweaty. His dyed purple hair is matted, some of it slicked down, stuck to his head, and other bits are sticking up wildly. The whites of his bright blue eyes are a little bloodshot, but there is no blood below his nose this time, so that’s something.

Splashing some water on his face to try to wake himself up a little, Dustin dries off his face with a towel, and then heads back to his bedroom. Dustin sits on the edge of his bed and pulls out the sketchbook he keeps there, and the charcoal.

He starts sketching the girl from memory. He can remember what she looked like, but Dustin can’t remember anything about the room she had been in, only that it was dark and cold. She’d been chained up; her wrists were bleeding. Dustin had been able to feel her fear; she’d been terrified. 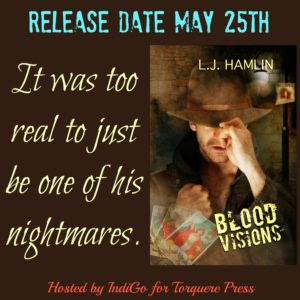 Rafflecopter Prize: One winner will be selected to win an eBook copy of Blood Visions.