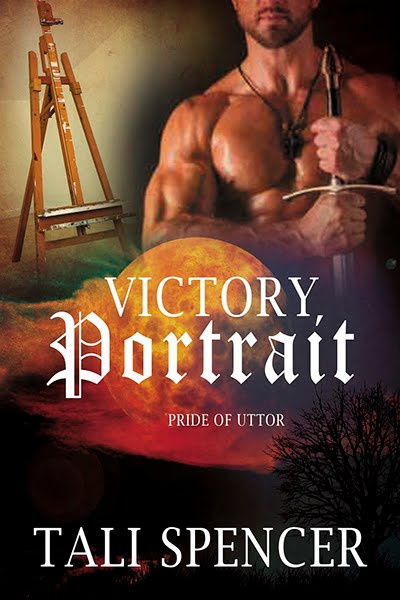 Imperial captive and former Sebboyan prince Peta Kordeun has one great wish: to meet Darius Arrento, conqueror of his country and a man he has idolized since childhood. That wish comes true the day the Uttoran emperor assigns Peta to assist the artist who will be painting the great general’s official portrait.

General Darius Arrento would rather take a crossbow bolt through his flesh than sit for a portrait, until his friend the emperor forces his hand. The notorious artist, Brazzi, uses semen and other sexual fluids to bind his colors—and Arrento is captivated by the artist’s pretty helper. Before long he is driven to possess the gorgeous young man who draws battle maps and whose naïve charm has won more hearts in Uttor than Arrento has won battles.

When Arrento learns that Peta, the slave he covets and wants for his own, is one of the despised Kordeun princes, he storms from Uttor toward a far corner of the empire—where he quickly finds himself embroiled in a plot to tear Uttor’s empire apart. His emotions and loyalties frayed, the great Arrento is in the battle of his life…and Peta may hold the key to his survival.

“You want me to assist the painter. Only that?” Peta asked.
“Yes. I just want you to understand you will be naked and…Brazzi will want you to be sexually aroused.”
“What?”
“It’s what Brazzi does. Not for himself—not unless you’re a woman—but for his method. He was tried three years ago on charges of obscenity because he uses…sexual fluids for mixing his paint. He truly is a genius. His colors are astonishing.”
“And you want Arrento to see me like that? Naked and…being used?”
“No.” Gaspar was being firm. “I want a portrait of my general. And I happen to think that the sight of you will keep his ass firmly planted for whatever sittings the painter requires. You see, Darius has one weakness—only one. He cannot resist a thing of beauty—and you, my pretty slave, are the most breathtaking young man I have ever had the privilege to look upon.”
Peta flushed. Gaspar wasn’t smiling. The man was serious.
Could he do it? Did he want to do it? Peta knew he was pretty. His looks had blessed and cursed him all his life. His beauty had attracted Kesme as a fellow cadet and was what Kesme had praised that last night when they’d made love...and Peta’s face was what Lukacz, his own father, had sought to destroy, thinking that doing so would release him from predation and unnatural desires. And now Gaspar, too, wanted only one thing…
“Just sit there and look pretty,” he said, heart sinking as he grasped what Gaspar was asking him to do.
“Only if you’re willing. I’m not completely oblivious to what this sort of service might entail. It could be rather…awkward. On the other hand, it might not be for long. Darius can be stubborn. It’s possible he won’t show up.”
And just as possible that he would.
Peta wanted to say no but he could not get his mouth to form the word. He might never get another chance to see Arrento, perhaps hear his voice. Be in the same room with him.
He’d be silent…naked…terribly exposed even in his utter worship.
But he would at least be able to say he had seen the great man.
“I’ll do it,” he said.

Today I’m very lucky to be interviewing Tali Spencer, author of Victory Portrait.
Hi Tali, thank you for agreeing to this interview. Tell us a little about yourself, your background, and your current book.

Thanks for this opportunity to visit and talk about this book. Me? I’m a Midwesterner who lives near Philadelphia, where I constantly mystify people with my incessant friendliness. I also have a long history of writing stories, most of them novels, in hope of entertaining readers the way other writers have entertained me.

1) Give us an interesting fun fact or a few about your book or series:

The artist in Victory Portrait uses human semen and precome to bind his paints, which is why he has a naked young male to supply that ingredient. This is actually a thing—my research turned up artists like Mario Castillo and Marcel Duchamp, who have used semen in their art. At the time I came up with the idea, I didn’t know this; I just thought I was being kinky!

2) How did you come up with the title of your book or series?

I tend to title my books according to subject. This story hinges on a victorious general getting his portrait painted—hence Victory Portrait. Ultimately the title became even more fitting because there are more than just that one victory in the book.

3)  Have you ever given one of your characters the personality of someone you know?

Can I plead the fifth on this? Okay, well, because they already know…I have given characters traits drawn directly from my three sons. Not in this book, though. But Madd, the male witch in Thick as Thieves, sputters much like my youngest when indignant. When we get together, we sometimes play Which Son is This (Character)? Contrary to belief, not all my characters are derived from people I know or to whom I gave birth.

4) What do you think makes a good story?

Great characters who surprise me (in good or interesting ways, not by causing me to sigh in disappointment) and deep world-building. Powerful characters can lift a story from shabby world-building, and an amazing world can make up for okay characters—but a story that has neither won’t grab me.

5) What does your family think of your writing?

All of them are wonderfully supportive. My sons have watched me write and get published since they were babies, so author mom is what they know. My mother finds my writing of M/M romance a bit perplexing (she’s doesn’t see the appeal) but she’s read my M/F romances (skips over the sex) and talks me up to her friends. My siblings knew I was a writer before my sons did; I used to tell my sister stories at night or when we walked to and from school. As for my husband, he’s my biggest fan. I’m blessed with a family that understands what I do and thinks it’s great.

Thanks to a restless father, she grew up as a bit of a nomad and still loves to travel whenever she can. Her longest stint in one place was Milwaukee where she went to college, enjoyed a series of interesting careers, and raised three surprisingly well-adjusted sons. She later married her true love and put down new roots in Philadelphia, where she lives in an ongoing Italian American family sitcom. At least she’s learned how make good pasta. When not writing, Tali reads everything from sweet goofy romances to medical research, manages her fantasy football team—go Gekkos!—and takes long walks with her loving, if slightly neurotic, poodle.

Tali’s other books include the three preceding Uttor books: Captive Heart, Dangerous Beauty, and Adored, all with Resplendence. Her gay male high fantasy stories, Thick as Thieves, Sorcerer’s Knot, and The Prince of Winds, are published by Dreamspinner Press. She often posts free stories and excerpts on her blog. 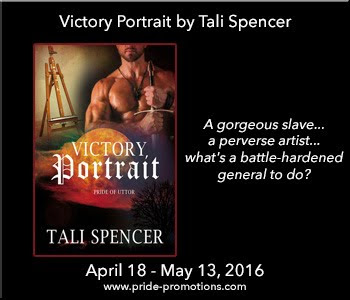